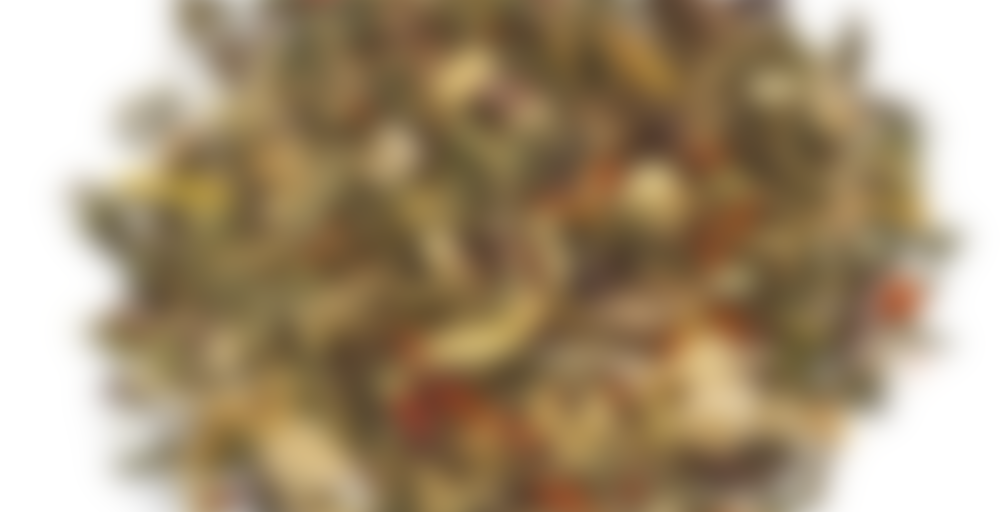 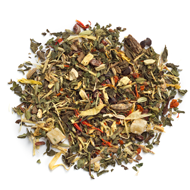 Let’s do the twist

Here’s one for black licorice lovers. With its sweet anise seed taste, it’s just like biting into a black licorice candy. But it’s also packed with all sorts of good-for-you herbs and spices, from ginger root to nettle leaf. And if you’re suffering from a sore throat, it doesn’t get any more soothing than this. That’s right: not only is this your new favourite sweet treat…it’s also your new favourite cold remedy.

I took this out of my trade it away pile so I could have a cup of it today, but …. it’s just as awful as I remember.

Back in the swap box it goes. Maybe someday, someone will love it.

I know licorice is good for you, but I just can’t stand it.

I love licorice, but for some reason I just don’t like this tea. The spices are all… wrong.

I’m getting to the bottom of the bag and there was a whole lot of chili pepper in this cup. Seriously- I was sneezing! Still a good cup of tea and I got my licorice fix for the evening.

This is some powerful stuff, right? I remember getting a sneeze or two out of my own pouch! I ususually have it when I feel a little under the weather, I find it very soothing for soar throat.

Yes! I like the warming and cooling sensation of this tea even when I’m not sick. My allergies got to me a little yesterday, so this was perfect to open everything up.

I’m not usually a fan of licorice and I have been putting off trying this tea for a while. Today is the sort of day where I’m willing to try anything and I’m thankful to be using this one up.

It did smell licorice like with aniseed and mixed herbs. Not the most attractive scent for me personally but not the worst either.

Tea is dark golden brown once steeped with mixed herb aroma and slight sweetness of licorice. It smells too herbal for my personal liking, I have memories of my mother hoarding dried herbs to make magickal oils with for her business and it stunk the whole house out with the same scent.

The flavour matches the scent for the most part, it’s very herbal tasting with only a touch of sweet licorice in the after taste. It’s quite light and less thick and icky as I was expecting. It has a slight tingling sensation that reminds me of how refreshing mint feels when that tickles the lips, I’m thinking maybe the work of the clove.

I can drink it but just struggling to finish it. Sorry David’s Tea but this is not for me.

Thanks to BoxerMama for this sample.

I love licorice root! There, I said it!

Having said that, this tea is OK. Not something I’d buy, there are way too many other flavors in there with the licorice, but something to sample in the evening when I really don’t need to add any more caffeine to my day. I have another early gig tomorrow, gotta leave the house by 6:15 again. I want to turn on my AX, but ‘you know who’ will start jamming & next thing you know, it will be midnight, or later!

Thank you TeaFairy for this Sample!

My dad loved black licorice candy. He got the worst kind available that tasted like soap and Sen Sen breath little squares that…blech…he must have KNOWN my brother and I would never, never try to steal! Ever! He was right! I was hoping this tea was not going to be a similar experience.
The tea brews up deep gold but not very fragrant. It does not smell like licorice.
Hum.
One sip…warm in the mouth not from the water, but a heat from an ingredient which may be the Ginger or Chili. I can taste Licorice and Anise and a little Fennel…which together is pleasing. There is heat, like I said, and a coolness from Mint. Altogether, not what I thought the tea was going to taste like…and naturally sweet. I don’t think you should be afraid to try this tea unless you want to avoid the Chili. There is a kickin spicy finish.
I think DT could have gone further with the Anise. The Licorice is tame for true Licorice lovers. You could add some more Anise yourself though.

Aha Moment! When you’re sick…adding honey and lemon is soothing…so, what would this taste like?
I tried the tea that way and…WOW! A great improvement on the flavor!!! Is this what was intended in the first place? Licorice Twist, Wildflower Honey, Lemon! Fantastic!

Soft sweetness that blooms into a full licorice sweet twinge that fills the mouth. I’m usually sensitive to cardamom, but in this tisane it seems to be blended in quite well with the other spices.
I can taste the peppermint at the beginning of the sip. The ginger, cardamom and chili seem to give it a bit of a zip factor. I cannot detect any pineapple flavor. Thin mouth-feel. After-taste is licorice-sweet with a bit of spiciness.

I would probably prefer if there weren’t so many ingredients but I feel that they are very well-blended together. I wouldn’t say that all the flavours compliment the licorice but make for a very interesting tasting experience.

As the tea cools, I detect a thicker mouth-feel.

When I ordered this, I had a bit more licorice in mind. It’s kind of blandly herbal with a little step-kick of ginger and a licorice aftertaste that kind of coats your mouth and settles down thickly for a moment before it finally gets around to hitting your taste buds.

This is another tea I got my mom for Christmas, as she’s a licorice fiend, myself..not so much. So it was with a bit of apprehension that I tried this tea. She actually snuck a cup before I had a chance to try it with her, and she said it was good. So I brewed us both a cup tonight.

The dry smell is predominantly minty, with a twinge of licorice. Steeped, hmm, it’s a lighter mint smell with some sweetness, to be honest, I didn’t smell it too much as it was brewing! I steeped for 5 minutes, about 2.5 tsps for 2 cups of tea. Also, the liquor was a rich sunny yellow, must be from the safflower and marigold. It was very pretty while infusing, the little flowers were floating all over the place :)

The taste is actually not what I was expecting! First you get a hit of the mint, then I get some of the nettle (I only know it’s nettle because of my other nettle tea I have), some ginger, a hint of heat from the chillies, and then…the licorice! It hits..it’s a cloying sweet aftertaste most definitely like licorice candies. This is my least favorite part of the cup, but that was to be expected as I’m not a huge fan of licorice. I imagine that some of the sweetness also comes from the pineapple. There’s also a nice swirling of spices throughout this, and yes, the warmth of the chili is still present a bit after the sip.

Overall, this tea surprised me (yay!). It wasn’t as licorice-y as I thought it would be, and I’m very happy the mint is at the start of the sip as I love mint! This tea is actually quite complex to me, but the flavors mesh pretty well together. I don’t think this would be a repurchase for me, just due to personal taste. But I must admit, this would be darn soothing if I get a cold, so I might get a little bit to have on hand, and it might be nice to have something different. Oh, and mom likes it, and that was the main goal, so hurray!! 3 for 3 for the teas, although she hasn’t cracked into her new tin of Pumpkin Chai yet :P

WHOA! First sip made me feel like I got punched in the mouth with licorice. It was SUPER sweet and slowly took over my whole mouth. By the end of the cup my throat felt weird and so did my stomach. My husband loves it though.

Boiling 7 min, 0 sec
Yours I Like This
8 likes
0 comments
Edit

I don’t smell it, I don’t taste it. I don’t understand.

I have no idea what it tastes like. The only thing I know is that it’s not licorice. And it’s not good either.

I have a feeling my dad would love this, even if the licorice isn’t dominating. He can taste licorice in things that don’t even have licorice :P And he adores it.

I would happily send the whole 50g bag to your dad lol ! He would probably taste it because based on the comments I found here on Steepster most people do ! Not me :(

If you want, I can send you my shipping address :P