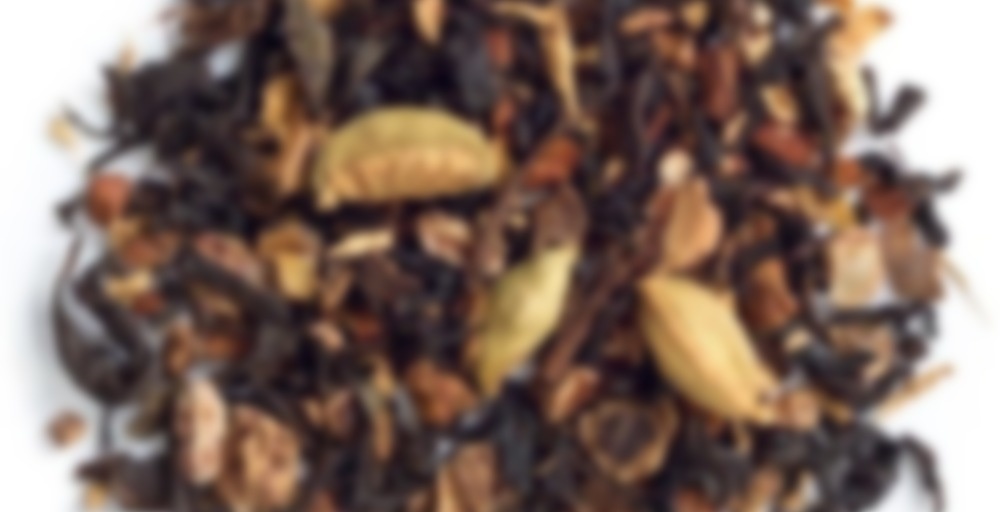 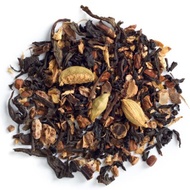 The ultimate digestif
Some people like to finish a heavy meal with a sweet treat. Others like to sit and digest with a hot cup of tea. But why choose? With this carob-and-spice oolong blend, you can have it all. In China, they’ve been drinking oolong teas to aid digestion for thousands of years. And carob has been used to soothe upset stomachs since Biblical times. Never heard of carob? It’s a naturally sweet and nutritious seed, often used as a chocolate substitute. And when you blend it with oolong, cinnamon, cardamom and ginger, it’s the perfect guilt-free after dinner treat.

Ok – last review before going to catch my bus! I’m such a slacker. It doesn’t help that although I’ve had three cups of black tea, I feel just as tired as before… ugh.

Anyways…. 500th Tasting Note!!! Exciting! This was unintentional, and I certainly didn’t pick any special tea to mark such an occasion, just a sample that I ran across and figured I should finally try.

Now, I swear I haven’t had this tea before, but the aroma of it is ridiculously familiar. I’m wondering if it’s a similarity to Carrot Cake (oolong base)? Or Super Chocolate (carob, cinnamon)? Or maybe it’s just the carob. I’m so confused though. The aroma is kind of chai-y, cinnamony, carob-y. The flavour tastes much like a watered-down, chocolatey chai. Which I swear is what I think Super Chocolate is like, except that I know that one’s a green! But I don’t have any more Super Chocolate to try against it, and I think it’s an online exclusive now, so perhaps this mystery will never be solved.

Anyhow, I like this well enough, perhaps not enough to purchase, but certainly to drink again. Can’t pick out the oolong in particular, but that’s common with DT oolong blends aside from Banana Oolong.

ETA: Second infusion remains pretty tasty, mostly like a (chocolatey?) chai though (which I do like). Same with the third. I feel like this tea could last a lot longer than I plan on taking it, because the spices just aren’t losing flavour.

Meh
This tastes like more of a “chai” than it does a chocolate tea. The gingery fennel taste overpowers the chocolate by so much that I would never name it as such!! I’ve always disliked fennel. It’s so pungent and what a bully!
Anyhow, when the cup is lukewarm, the chocolate comes out a bit more, but only for about five minutes.
I resteeped it three times, and took out the fennel on the last one… which seemed to make it a bit easier to bear, but not really enough to purchase any for the house. I mean, it was ok… but nothing special in my books. shrugs
Oh well. Watching the fennel puff up like a balloon was fun!

I like fennel so, on this point we shall have to disagree. :) I can’t imagine fennel in a chocolate tea though, that sounds like a yucky combination!

I love fennel too, but never had it in tea. I love going to local Indian restaurants. Sssoooo good…….

It is an interesting combination!! Not something I would have dreamed up myself.
and Indian? Oh my, I looooove Indian!! I just put up with the fennel and gorge on everything else lol

Uh oh. Don’t like fennel/licorice at all! Good thing I got just a small amount to try. Not sure when I will try it. Seems like Oh Christmas Treat is he way to start the day off tomorrow, even though I’m Jew-ish.

I was hoping they’d throw in some seasonal teas for other holiday events… I guess Kanpe could be for Kwanzaa but what about Hannukah?? :)

This one is going back, if I can find the receipt, though I don’t need it if I’m exchanging. It isn’t like chocolate at all.

good idea! if enough people do the same maybe they will rework the blend to make it more chocolatey and less medicinal :)

I received this from TeaPet in the box of David’s Tea that I bought.

There was about one cups worth of this left so thought I would polish this off. The reviews of this are not great and I can see if you had expectations based on the name this tea wouldn’t really live up to the expectations, but I found this to be pretty tasty. I tasted a dark oolong with hints of cinnamon.

Interesting! I wish Davids still had this around.

The primary flavour in this one is that of chocolate sourced from the carob. It is sweet throughout with a light roasted flavour. The taste of the spices are not very apparent but is definitely present.

First steeping…definitely more spice than chocolate, as noted by others. I don’t taste the licorice, but I do taste the cinnamon and cardamon, and together I think they give off a licorice-like taste.

Second steeping…spiked it with a little bit of Chocolate Chili Chai, and served with milk.

Nothing terribly remarkable either way, but not horrible either. I don’t know if I’d buy this again on it being a chocolate tea, but for the medicinal ginger and such, perhaps. I do have a delicate stomach at times, so it might be worth stocking a little as a medicinal tea. That said, there are other teas with ginger and cinnamon and so on…so I do have some other choices as well.

The chocolate is a lie.

Sooooo I was hoping this would be better than the Super Chocolate and I was wrong. I’d agree with the other reviewers that it is really more like a chai or some kind of spice tea rather than a chocolate tea. Which would be good if I like chai. Which I don’t. The combination of that blasted cinnamon and the sickly sweet of something in there made this a rather unpleasant cup. Boo.

What! I think you need to try this with a cooler temperature – the cinnamon/spices won’t come out as much. Aim for around 70 C!

Thanks for the tip, I’ll try it that way!

Ever wondered what a hot, chocolate Popsicle tastes like? I don’t anymore.

This is a darn fine tea. A wonderful friend/co-worker gave me a little sample of this tea, along with a cinnamon honey stick. Brewed tea at boiling for 4 min, dropped that honey in there and OMG. So. Good. A great spiced tea with deeper flavour than some, probably from the carob. If you like chais or anything of that nature, you will LOVE this. Must buy!

Just tried this in store.. I don’t like it…

Despite how I just laughed out loud reading AliPants’s review here, I have to agree with her. That’s the flavour I got as well!

I got this one in store yesterday. No idea how they brewed it, but since I tend to be lazy about taking the bags out when I buy in store, I ended up leaving the bag in the entire time I was sipping. It certainly isn’t a bad tea. There was a mild spice on first sip, but as the cup cooled, it disappeared and left . . . warm milked down chocolate popsicle.

I did add milk to the tea, and a bit of agave. Perhaps that’s why I had a different experience than most?