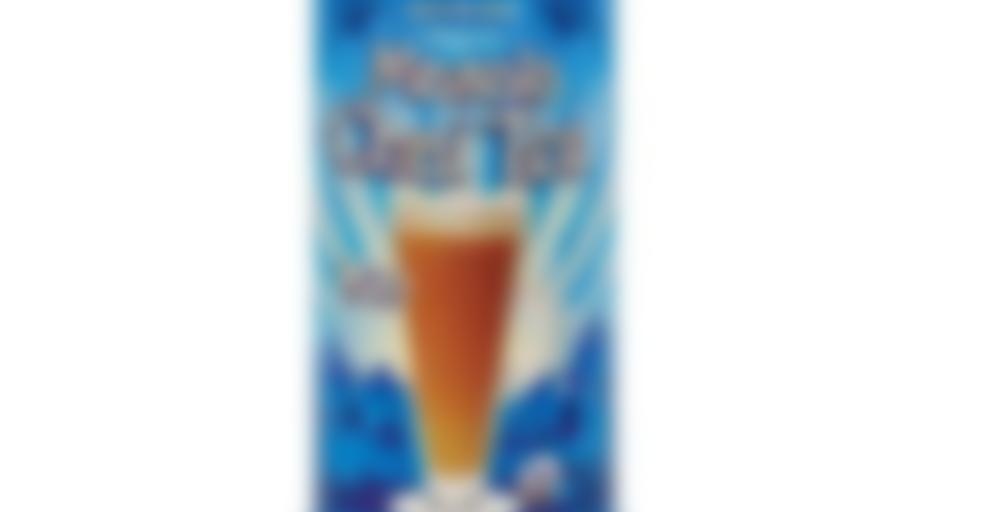 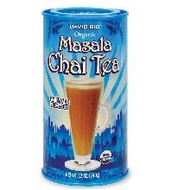 David Rio Masala Chai is a spirited blend of tea and aromatic spices.

Blerg. Disappointing on so many levels, not the least of which that Williams Sonoma rarely lets me down.

First of all, let me say that this is essentially a powder. I opened the tin, expecting…you know, spices. This is a not that. It looks like sand. It looks granulated.

The smell of…whatever it is, kind of smells like chai. It definitely has that spiced quality to it. But overwhelmingly, and it took me a second to recognize this because I was NOT expecting it, it smells like rubber cement. I kid you not. It has that distinct, alcohol-like quality to it, and it does that sharp, not quite stinging thing to my nostrils that rubber cement does.

At this point, you’re probably wondering why I didn’t just stop here, but the guy in Williams Sonoma had spoken very well about it. I’m guessing that they’d had samples before in the store and he’d tried it. I know you’re thinking “retail spiel” etc., but I used to work retail and I can usually recognize when someone’s trying to sell you something just to make a sale. Plus, I don’t think that the people in Williams Sonoma are commissioned, but I could be wrong on that. Anyhow, I figured why not, since Angrboda had had some of David Rio’s stuff [from a completely different part of the collection] with some success.

So I, somewhat dubiously, measured some out and shook it into some milk that was heating in a saucepan. I didn’t bother adding any sugar, since it looked like it already had some in it.

Once the mixture had heated adequately [though some of the powder never quite dissolved, which was somewhat disconcerting], I poured it into a cup.

Okay. This kind of makes me think of what it would taste like if Swiss Miss did chai, except you don’t get any mini marshmallows. It’s synthetic tasting. And at the risk of sounding gross, the overall taste makes me think of that taste you get in your mouth before you brush your teeth in the morning. That, plus maybe some spices, plus sugar. If you dumped a teaspoon of sugar into your mouth first thing in the morning, you could probably replicate this pretty closely.

I’m already trying to strategize trying to return this to Williams Sonoma. It would be ridiculously pretentious, so I won’t do it, but a big part of me wants to bring in some of Samovar’s Masala Chai and make it for them, then say, “This? This is chai. This is spiced rubber cement. Can I return this please?” Likely I’ll just go in and ask nicely and hope they allow me to exchange it for something else. Though if I see the guy that recommended it to me, I’ll probably give him a few polite words on what I thought about it. Plus, he was kinda cute, so…you know. That doesn’t hurt either.

If that doesn’t explain why this rating is going to be abysmal, I don’t know what else will.

Eh, I’m not chai-experienced anyway. Except for two (one of which was years ago and vast disaster) this powdery stuff is my whole experience. Maybe it’s like… training wheels and you’re too experienced for it?
The ones I’ve had was those with animals in the names, and they’re very sweet, but I think maybe I prefer that.

It could very well be. I actually think that added flavor could help the taste quite a bit. It’s kind of like how I feel about Starbucks, I guess. The coffee they use really isn’t that great, but does that mean that I wouldn’t drink an Espresso Truffle at the height of my coffee phase [or even now]? No. Same thing with hot chocolate. I love my ACKC chocolate shavings “fancy” chocolate that involves whisking and whatnot. But I’ll still drink Swiss Miss.

This particular one, however, just wasn’t…I don’t know. I think the weird smell did a lot towards turning me off, but something about it was very…bizarre.

Yeah, mediocre stuff can be surprisingly awesomely good, but it doesn’t work if one wasn’t expecting mediocrity.

Doooo it (go and have a taste test with the guy). Let us know how it goes.

I think they do get commission in Williams-Sonoma. At least, the sales people are always prowling the floor where I go… that could be why? Yeah, nobody needs instant chai mix unless you’re on the go. Ew.

@Angrboda Seriously. It’s the same thing with me and movies. And actually…pretty much everything.

@Ricky Hah, it’s going to have to wait until the malls stop being crazy. I’m not bringing in my own tea to WS, though. That’s just…ugh, I’d have to hate myself afterwards and that’s not pleasant.

@teaplz Heh, as a former retail monkey I could go into this in much more depth, but there are several reasons for prowling [a cranky manager, for example] and my experience tells me they’re not on commission. It could be that things differ in certain stores, but I’m thinking they’ve got personal trackers but aren’t commissioned. They don’t ask you who helped you at the register and I’m often rung out by people who didn’t help me on the floor. [Usually commissioned sales people are tracked through the registers in some way or another. And they’re usually MUCH more aggressive.] But retail mini-rant aside, yeah. I think that the fact that they call it “Organic Masala Chai” made me laugh even more. There was hardly anything in the entire experience that read to me as organic. Sigh.

I’m pretty sure Williams-Sonoma sales people are not commissioned. I think I asked once and was told that they weren’t. However, it is worth realizing that they’re not hired for their knowledge of tea. My experience with Williams-Sonoma people is that they have a lot of knowledge of cakes and pastries, some knowledge of other food items and then their knowledge falls off a cliff. I’ve often spent a good deal of time on slow days explaining how to substitute vegan items for eggs and dairy and they knew very little on the topic. When I’ve asked about the food items they sell, they frequently don’t know that much about most of them. They know their pots, pans, and knives extremely well, though.

@Carolyn Ah, mystery solved-ish! But yes, you’re totally right on the tea front, so it’s probably a shame on me situation for buying it on recommendation, but now it’s something I know more about. Funny, I’m usually in there to either get stuff for pastry or baking. Or a pot. Or a pan. Or a knife. [Guns for show, knives for a pro.] Maybe this is why I like them so much.