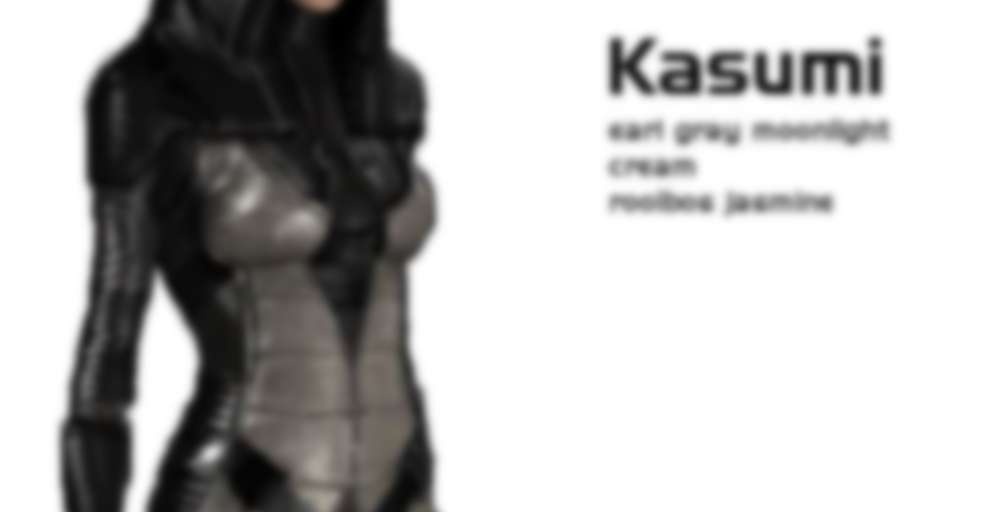 A sweet, yet sneaky tea, with notes of bergamot and a floral aroma.

Inspired by the Mass Effect games from Bioware.

Another one that I got from my discounted sampler while up at school. Out of the pack I got, this one was one of my favorites, having a truly alien flavor. One of my friends even called it out of this world, though Kasumi is one of the more grounded characters in the game-well, with the exception of her exquisite tastes. This tea was designed around her very well, though how can you accurately characterize someone based off of tea notes? Tis an art that I am partially curious of.

To describe this tea properly, I am going to talk about her character a little bit. Kasumi is a master, intergalactic thief and cat burglar, stealing pieces only of the “priceless” kind. She herself does have a Japanese heritage, and like a hooded ninja, she is incredibly skilled in stealth, hacking, and deception. Though adept, she is by no means hardened; more playful, and possibly insightful, really.

For whatever reason, this black and rooibos blend actually suits her well, and better than a green tea. Yes, she’s Japanese, but that cultural angle comes more in with dominant jasmine smell and taste. After the jasmine, the taste transforms into something creamier, and maltier, with a candy like sweetness provided by the cream black tea and the Earl Grey moonlight. The rooibos provides the remaining potent sweetness from it’s own mildly citrus like nature, and the amber color of this tea. Like her, there is a sweetness and decadence to the profile, but a lingering subtlety in how the flavors come together.

Now, this is not a tea for most. It is VERY sweet. It’s more for an amateur who would like the highly flavored nature of this tea. And definitely for a Mass Effect fan that likes this character. The extreme dependence on the extracts for flavor is the only other off putting angle of this tea, relying less on the natural, pure taste and aroma of the tea itself. That can be said for most Adagio tea, though: too much dependence on flavoring extracts. As you can probably infer from reading this, this is blasphemy for a tea purist; yet a new, foreign dessert to a newbie.