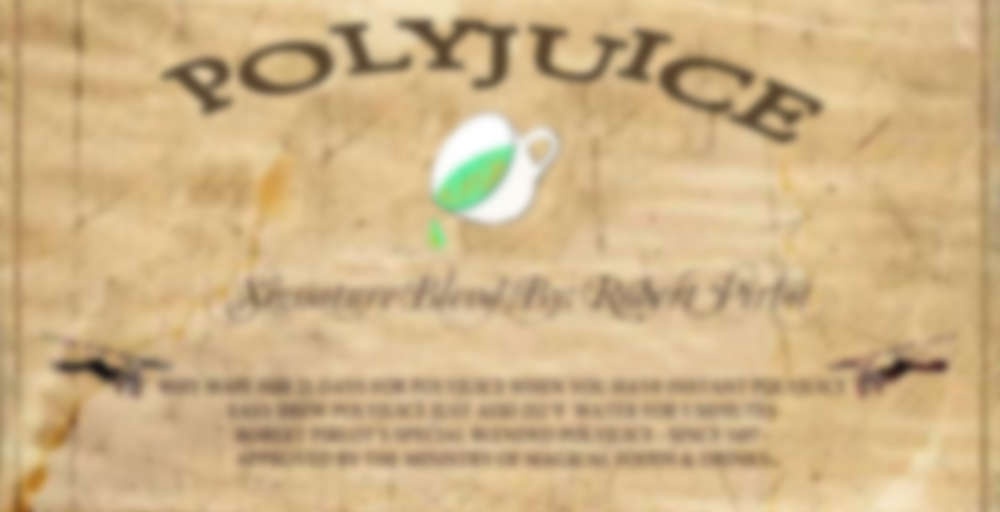 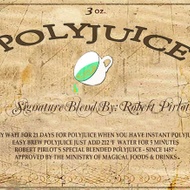 Why Brew for 21 days when you have instant polyjuice. Polyjuice Potion is a very complicated potion that allows the drinker to assume the form of someone else. WARNING cannot change into an Animal.

Picked this blend of all the chais to compensate for the lack of spice in the Spice Imperial I started off the day with. It is an overwhelming combination of spices, but that’s what I was looking for right now so I’m sipping away happily. At first, the Thai Chai was dominant and I got mostly coconut and lemongrass, but as my cup is cooling the rest of the spices come out more, mainly cardamom and ginger with some cinnamon too. I think I can even detect the chocolate and vanilla right at the end of the sip. Yeah, this is what I wanted. Spice overload.

Ok, so my first review here is this tea. It’s pretty good, but maybe a little generic on the taste. Nothing really jumps out at me. I feel like I’d finish the cup wherever I was, but would probably need to blend it with something that has a stronger finish to it. It isn’t a bad tea, but may just need more steeping time for me. But then again, I am a neophyte to the tea world, so take my review with a grain of salt….or half a shaker.

This is one of the Magic Potions blends that might actually live up to its name, although what I can’t work out is whether that was intended. This one’s a blend of three Adagio chai – Thai Chai, Rooibos Vanilla Chai, and Chocolate Chai. It seems an odd mix, but then Polyjuice is an odd potion – it’s supposed to be complicated…and potentially disgusting.

In practice, it’s not great…but it’s not quite as bad as I thought it might be. There’s too much of some things – cardamon and cinnamon chief among them – but I suppose that’s to be expected since they’re likely common to all three chai blends. I can taste chocolate, but it’s muted and fairly watery, a decent quantity of vanilla, and a touch of coconut. It’s kind of bounty-ish, but with a background of chai spice. I suppose that means I can taste something from each of the individual blends, but I can’t say that it’s a particularly successful combination. It’s not bad, as such, but each time I take a sip I’m struck by the fact that I’m drinking three different things and not one coherent whole. It doesn’t hang together very convincingly.

One consequence of this blending that’s more disappointing is that none of the ingredients are there in enough quantity to make any real impact, so although there are flavours I recognise, they’re all a bit weak and muddled. The exception here is the spices, which are too heavy handed – I expect that’s largely because they’re there in the most significant quantity, having come from three separate blends which have each contributed some of the same things, along with their something different – with the result that the ingredients in common have become dominant at the expense of the more unique flavours.

I feel like I’m not making sense, but perhaps that in itself a fitting tribute to this blend. It’s an odd duck – not unpleasant by any means, but confused for sure.

Yes, it was a bit too much to detect individual flavors, but it turned out to be a generally drinkable, OK chai.

This one smells strongly of chai spice and oranges. I can see the rooibos when I scoop the dry leaf. I was surprised to learn that it has black tea too! Lovely.

It tastes like an average citrus spice blend. Good for the winter season.

I didn’t even realize this one had rooibos until I went to record my note. Yes!

This one is pretty tasty, nothing I need to keep around, but my one cup is enjoyable. The chai like spices aren’t under- or overwhelming. There is a subtle hint of vanilla here too. Not at all what I was expecting from looking at the dry blend.

This is officially the last of the Magic Potion teas that Dexter so kindly and thoughtfully sent to me. And although I didn’t delibretly put this one off for last, I guess it kinda makes sense why I subconsciously chose the others over this one: it’s so freaking spice heavy! Damn Chai.

Yeah, I steeped it up and really as soon as the water hit the leaves I knew so much that I wouldn’t like this one, and damn was I right. It’s a mess. Really, it truly is.

It’s composed of three chai blends and between the three there’s just so much spice and then so much “extra stuff” that should be making each chai special that all that extra crap is too thinly stretched to even compare with the abundance of nasty spice. It was like a cup of hot, concentrated ginger/cinnamon vomit with a pinch of lemon grass. Everything else was really lost/muddled. Vanilla? Nope. Chocolate? Hell nah.

But I’ll give it some props: Polyjuice is supposed to be extremely complicated and disgusting tasting, and this blend met those qualities. So ten points to Gryffindor for the accuracy in that regard. It goes without saying this wasn’t for me though.

Ha! “10 points to Gryffindor for accuracy”

Well it’s only supposed to be disgusting tasting if your drinking the ‘essence’ of someone evil. lol…Harry Potter geek too

While I am admittedly not a Harry Potter fan (in the slightest) my husband is and he has been re-reading the books again. So for our tea tonight I chose this blend which came from the return of the EU TTB round 2, my husbands face lit up a little when I said the name of the blend. I’m after something nice to fuel me while I cross stitch. I’ve been getting into it again, it was something I did as a child and I even joined a sewing/craft club. Now I’m doing a huuuge castle to enter into a contest at my club in September, hopefully it will be done by then. Though I find tea drinking and sewing go together very well.
Here is the last two projects I finished this month:
http://tinypic.com/r/awaj9k/8
http://tinypic.com/r/2149ncg/8

Back to the tea – In raw state it smells like a sweet chai, particularly cardamom and cinnamon but rather fresh and crisp. Nice so far but no chocolate is present.

Once steeped the tea smells thickly like chocolate but in a pleasant way, however it does not fully mask the spicy chai behind it.

Flavour is not as thick as it smells though the chai is highly noticeable, again particularly cardamom and cinnamon. The chocolate is not very present but it does have a smoothness that shows it’s a chai with a difference. Perhaps flavour wise is more cocoa than chocolate but still it’s subtlety is pleasant enough. I have had chocolate chai before from Della Terra which is highly chocolatey in flavour, this is the polar opposite. It’s a nice blend and it’s theme was joyous (for my husband anyway) but the flavour is nothing past average. Good for a personal custom blend though, just too weak for me.

Your projects are so cute! I used to be really into cross-stitching, too, but that was a while ago. Maybe I’ll take it up again :)

You can always give it another go, I found it very easy to pick it up again after so long. There are no end of beautiful tea related patterns now a days, much more than when I was younger. :)

The smell of cardamom in this was strong and immediately off putting for my tastes so I wasn’t surprised when I took a sip and was overwhelmed by the cardamom flavor. No chocolate, no vanilla, just cardamom. With some milk, subtle notes of chocolate and vanilla emerge but the cardamom is still the most present and thus it is just not for me, though others who enjoy chai teas might be a fan. Nonetheless I want to say thank you to the awesome Nattie for being so generous and giving me the opportunity to try all the Harry Potter potions!

dexter sent this one my way and i’m glad she did. I actually rather enjoyed this one and would consider picking up more of it in future if the opportunity presented itself. It’s more of a fall kinda tea for me though, given that it[‘s a blend of chai’s. However, unlike a lot of adagio teas, there is actually life in this tea rather than that same underlying “taste” that many adagio teas have. thanks dex!