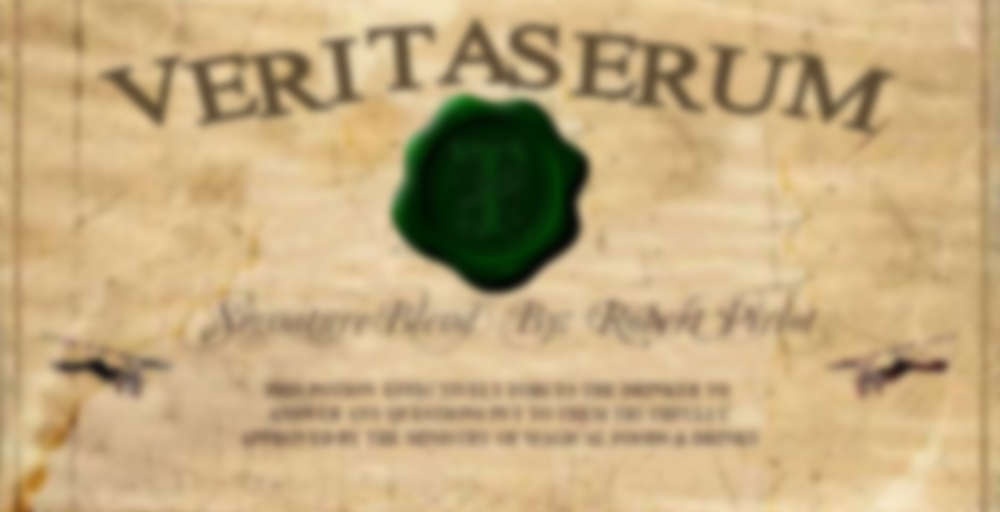 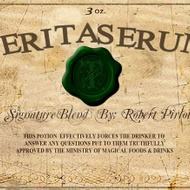 Veritaserum is clear, colourless, and odourless and is almost indistinguishable from water. The potion must mature for a full lunar phase, and is quite difficult to produce. It can be mixed with any drink, and three drops are a sufficient dose to make the drinker ‘spill out his innermost secrets’. Thus, the potion forces the drinker to tell the complete truth to any question asked to him/her.

accented with raspberry leaves, rose hips and chocolate chips
I actually based this mix off of Harry Potter and the Sorcerer’s Stone/ Philosopher’s Stone On Harry Potter’s first visit to Diagon Alley, Rubeus Hagrid presented him with a large ice cream (chocolate and raspberry with chopped nuts)

I just found pumpkin spice M&Ms and waffles today! The verdict on the chocolate is a definite yum! It was a bit chocolate overdose with this, but still worth it. I feel the same about this as last time. So basically, careful on temp/steep times or else it’ll be bitter, some chocolate, berry, and nut notes. Really great tea for mid afternoon or as an after diner treat if you don’t feel like eating something heavy!

Mixed with a bit of sugar, and very good. The raspberry jumped out first, but it kind of had a bit of a chocolate flavor after a bit. Very tasty. Watch the caffeine on this one. :)

This is the third of the teas I’ve tried from Adagio’s Magic Potions sampler, and the one that makes the least sense to me. It strikes me that Veritaserum, being colourless and flavourless, would not make for an interesting tea. Only in terms of its effects, perhaps, but I doubt it can replicate those.

I read a bit more about this one before I tried it, and it turns out that it’s based on the ice cream Hagrid buys for Harry in the first book – chocolate and raspberry with chopped hazelnuts. So why call it veritaserum? Colour me confused.

Setting the misnomer aside, this is actually a pretty decent blend. It’s a lot better than Ripe for Romance, which is the other raspberry/chocolate Adagio blend I’m most familiar with. That one was artificial and (on bad days) somehow contrived to taste of plastic; it reminded me most specifically of the scent of 80s Barbie dolls. This one is a much better prospect. The raspberry is actually fruity and quite juicy, and tastes like an actual raspberry – possibly the rosehip is helping with that. The chocolate is more of a background flavour, but there nonetheless. It tastes like dark chocolate, to me; the kind that balances on the edge of bitterness. The hazelnut is clear and prominent also, and adds a pleasant nuttiness that rounds out the flavour and seems to bring everything nicely together. It’s quite a harmony! What I’m reminded of most, drinking this, is a Raspberry Ruffle – a dark chocolate coated raspberry truffle that Woolworth’s used to sell when I was young. They’ve both fallen by the wayside now.

I don’t know whether this is a blend I’d repurchase, necessarily. It’s nice, but so are lots of other raspberry and/or chocolate teas. Also, let’s be totally honest – I bought this one for its name and its fandom connection, and the disconnect there kind of bothers me. Silly, but true.

The guy who created these blends did a crappy job matching the name of the potion to the personalities of the tea. The Draught of Peace should be a bedtime blend, not a caffeinated blend; the Butterbeer one should have a rooibos base; Felix Felicis should be caffeinated (to make the drinker feel like (s)he is ready to take on the world); and there shouldn’t be one named Veritaserum because Veritaserum is supposed to be clear and flavorless. It’s almost like he just made a bunch of awesome blends and then assigned them potion and beverage names from the Wizarding World at random.

I mean, they’re all delicious. Especially this one, which is a black tea with raspberry, dark chocolate, and hazelnut flavoring. I gotta say, this is one very nice tea. I love how the cocoa is bitter, not sweet. The raspberry is naturally sweet enough to balance it in a very organic way. The hazelnut is a nice touch, too— it’s almost like drinking deconstructed Nutella. Stripped of all refined sugar and calorie- free. Perfect for First-Half-of-January Resolutions. ;)

It was apparently inspired by the large ice cream that Hagrid buys for Harry in Diagon Alley in The Sorcerer’s Stone. Which has absolutely zilch to do with Veritaserum, because that potion doesn’t even get mentioned until The Goblet of Fire. Maybe he should have named the blends after the books instead?

Thank you Dexter for the sample! This one is definitely interesting. I wonder how the blender decided on the flavours for this one given that Veritaserum is supposed to have no flavour or smell?

I actually taste the raspberry in this very clearly which says a lot to me because with Adagio blends I find that a fair amount of the time the flavours are muddled because of lots going on with the blends. As for the other flavours in this, I think the black base is very heavy, bold, and brisk and as for the chocolate it’s definitely more of a dark chocolate with a bit of bitterness to it. I really don’t mind the bitterness though because it’s definitely more something I’m associating with the chocolate than oversteeping the tea or anything like that.

On the whole, this wasn’t so bad and I really did like that rich raspberry flavour (with the bitter dark chocolate it was almost like a raspberry truffle). Would I order it? No – but I’d absolutely drink it again if I had the chance.

Yeah, definitely not what I’d have expected for this particular magic potion but it was ok!

This is another of the samples from the Harry Potter customs I wanted to try, so Dexter sent me this and a few others. I can taste the raspberry and a little chocolate, but not much of anything else. It’s a pleasant enough tea, but not something I’d want to buy, to be honest. I am glad I had the chance to try it though. I have enough for one more cup.

The best part of swapping – being able to try teas before you buy. You either fall in love and HAVE TO HAVE more, or you cross it off the list and be glad you didn’t waste money on it. Either way I am happy to share. :))

Yet another Harry Potter blend from who other than Nattie. I am definitely getting chocolate and raspberry and I like it but it is not what I was expecting. For some reason I anticipated a strong mint taste (I think the green on the label?) so I was quite surprised. That doesn’t mean it isn’t good however I am not saddened to see it go as this just seems sort of flat. Nonetheless I am really grateful for the chance to have tasted it.

I brought the whole box of Harry Potter themed teas from Adagio to work today to let everyone try out whichever one they wanted… it was quite a hit. I think I caused an early morning commotion!

I decided I’d try this one since for some reason I was convinced that the Elixir of Life tea from this collection has chocolate in it… it doesn’t. But because of that I was craving a chocolate tea. This one definitely hit the spot.

It is by no means overwhelmingly chocolate, which I love about it, and I actually think I over steeped it because it got slightly bitter on me. Turns out that’s not really a bad thing, especially for someone who likes dark chocolate anyways. It ended up tasting like a liquid form of a dark chocolate raspberry bar. Yes please!

This is pretty tasty. The raspberry flavor seems to be better than the normal Adagio raspberry, and I’m not sure if that’s because of the addition of the raspberry leaves, or perhaps the rose hips lift the flavor, or because it’s tempered by the hazelnut and chocolate flavors. But it seems more juicy and natural.

The chocolate flavor doesn’t come through as strongly as I have feared (because let’s be honest, Adagio’s chocolate flavors aren’t the best), but add kind of a subtle milk chocolate layer that hides behind the roasty hazelnut.

I think this is the first chocolate-raspberry combination I’ve had made from Adagio teas and really liked (Ripe for Romance was a little lackluster and plastic-y).

I’m so, so excited that Shadowfall was awesome enough to pick this sampler up for me. I’ve quite liked the three I’ve tried so far. People on Steepster are so amazing.