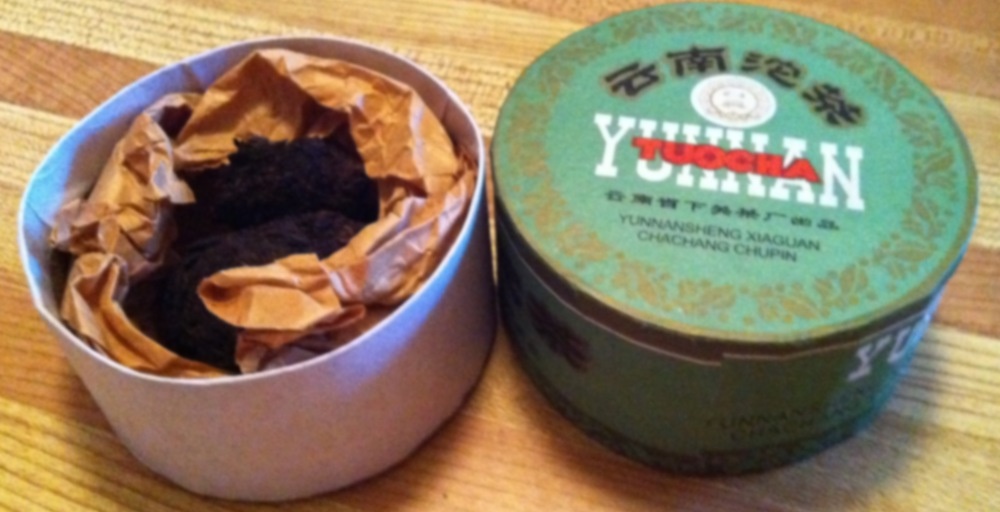 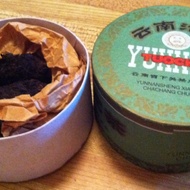 by Currently Unknown
77
You

This is from my roommate, and I can’t read Chinese, so have no idea what it actually is!

So one of my roommates (not the aforementioned roommate I often share tea with) is Chinese, and I frequently see her drinking tea, but made nothing of it until one time I saw her breaking off a piece of a round brick of tea to steep. I thought it was kind of cool, but still didn’t think too much about it. She called it black tea; I didn’t question it. Until today. It occurred to me that what she was drinking was probably pu’erh – so I caught her and asked, and sure enough, it is! Apparently her family went into an asian grocery and found the dustiest-looking box of pu’erh they had to buy. To each their own; that wouldn’t scream buy me to me! She offered to let me try a piece and I happily accepted – I love trying new things! She tells me that the way she drinks it is to brew it in boiling water and leave it in the cup as she drinks it, so it gets quite strong. I opted to use half the amount she usually does, and stick it in a teaball so I could remove it after a few minutes.

As it was steeping, I noticed some mildly fishy smells coming from it, along with some rich earthiness. Not unpleasant. Either now that I’m aware that fishiness can be a characteristic of pu’erhs, it concerns me less, or I’ve just grown used to it (from my wealth of experience trying two flavoured pu’erhs from DavidsTea), I’m not sure.

Taste-wise, it’s quite pleasant. Definitely earthy, but nothing like the dirt that the bagged pu’erh I tried a couple days ago was. It’s kind of reminding me of the piece inside a pistachio shell, not part of the edible nut, but coating it and attaching it to the hard shell. Er, I should probably be able to figure out what that part is botanically, but I’m really tired right now. REALLY tired. You’d never know that I just drank a whack of caffeinated tea.

Anyways, that’s what it reminds me of. I’m not tasting fishiness, and that aroma has pretty much dissipated. This is definitely a different sort of tea, but it’s growing on me with every sip. A nice change from flavoured. I’m now looking even more forward to my Verdant order arriving!!

I still have the other half-chunk she gave me; I think I’ll try that one more gong-fu style, including one or two rinses to begin with, since that seems to be the norm with pu’erhs.

I took a picture of the little box; I will try to post it on here (maybe from my phone?!) and perhaps someone can tell me what it is! Or where it’s from! Or something!

Not even smell? Hmm, it definitely smelled mildly fishy to me. Like I said though, I have no idea of its origins; the box is pictured. It says ‘sheng’ on it, so I made the assumption that that was what it was.

Oh well, this is the first straight one I’ve tried so I really didn’t know what to expect! It was pleasant enough in flavour though, so I’ll try more and then perhaps bring my experiences back to this one.