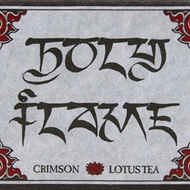 by Crimson Lotus Tea
78
You

Today I will be reviewing an interesting and somewhat traditional Tibetan tea called Holy Flame. This tea is intended to be used as the base for Tibetan Yak Butter Tea (Po Cha) which is consumed daily in Tibet. I have tried some instant mixes for Yak Butter Tea in the past and honestly found them disgusting, though saying that I am not a buttermilk fan in general. I found it to be far too salty and sickly that I couldn’t drink it. Perhaps having it fresh would make a difference but I may never find out. Either way when I saw Holy Flame for sale and the intention for the tea I was immediately interested to try it. I may not have liked Yak Butter Tea but I may like the Sheng base. I also like the idea of drinking something that is common in Tibet and actually what they would drink themselves. Though I have never visited, Tibet has always been a wondrous place in my mind

Opening the packet (which has awesome wrapper art by the way) I can note the Chinese characters for Xiaguan which is a district in China as well as being a town near the Southern end of Yunnan. Primarily speaking this region is very well known for their tea production and have some wonderful teas to boast. The brick is rather dark in colour with a hue of brown, dark brown and dark green colours. I can also note some stems/sticks are present and the leaves are a mixture of sizes as though they were loosely chopped before processing. It smells musty and wooden though subtle with a hint of smoke.

The tea has some steeping instructions on the website.

The tea soup is light brown in colour and bares a dry earth and smoke scent.

The flavour is mild in comparison to it’s pungent aroma. There is a smoky taste with some astringency in the after taste that leads to some dryness. Further bowls show an increase of depth and it becomes stronger though not by much.

The astringency is stronger and now bares a wooden must that somewhat matches the scent. It’s certainly strong and powerful considering such short steeps. The smoke still lingers in the aftertaste.

This is a more balanced steep in terms of astringency and smoke, either that or my pallet is used to it. However, the dryness has increased in the aftertaste and leaves my tongue almost dry.

The first sip comes across as astringent but it quickly softens into a smoky melody that envelopes my tongue and dances on the taste buds. Also the dryness is still present though not much of an issue.

Even on this steep it’s strong with ever pressing smoke and astringency. Also some sweetness coming through in the after taste.

This is starting to relax in strength but it’s still at a nice level. Smoke and wood with astringency still hang in the aftertaste.

It’s certainly starting to calm down but still has each flavour present.

And the flame burns out. There is little left in this steep apart from subtle smoke, a distance memory of a once lively Holy Flame that burnt bright.

Conclusion: This Sheng packs a pleasant punch with a lot of mouth feel that makes you wonder what each steep will bring. Like the flame of a candle; it burnt brighter and intensified until it inevitably burnt itself out to leave a smoky finish. Alright that is enough fire talk, I will extinguish any more fire based puns before I get on someone’s wick.

On a more serious note, it promised to be a strong tea and it delivered. Not only that but considering I used average leaf weight for minimum steep time it produced eight successful steeps. While this may be cheap and intended to be used as a base tea I like it as it is. It’s very suited for an everyday tea and I know I will end up taking this to work to drink so I can close my eyes with each sip and pretend I’m in Tibet.

Until next time, Happy Steeping!