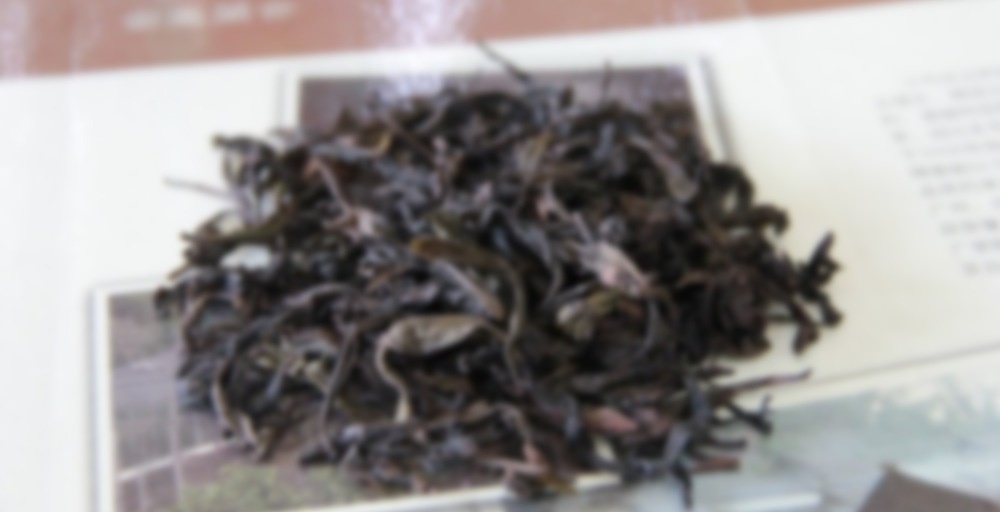 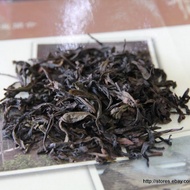 Da Hong Pao is an important Wuyi Oolong tea. Legend has it that the mother of a Ming Dynasty emperor was cured of an illness by a certain tea, and that emperor sent great red robes to clothe the four bushes from which that tea originated. Three of these original bushes, growing on a rock on Wuyi Mount and reportedly dates back to the Song Dynasty, still survive today and are highly venerated.

This was the first of the sample pack that I tried, but I brewed the cup with half the amount of leaf that I should have, so it was quite weak. Here we go with a proper brewing.

Of the samples I’ve had so far, this one smells the most burnt-toasted when brewed. It really does have a charcoaly aroma, like slightly burnt rice. Fortunately (for me) the flavor is lighter; I really thought this would be heavy, by it’s aroma, but it doesn’t get bogged down in roastiness. Still, it’s the predominant flavor, and I don’t get any of that roasted-grain sweetness to the tea. There is the barest hint of something greenish and floral at the end of the sip. I’m surprised that this one falls a little flat to me, and it doesn’t seem to have the depth of the other ones I’ve tried.

I didn’t get around to trying the very generous samples from China Cha Dao for a while after receiving them for a variety of reasons, including being overwhelmed with tea and going to the cottage a lot to enjoy the amazing fall weather and eat a lot of pumpkin baked goods. I’m feeling back in form now and started with this one.

It’s a really nice surprise. I was intimidated as I am not always fond of dark Oolongs. I’m not sure why, but the roastiness often doesn’t sit right with my stomach and my taste buds. This one smelled very dark and roasty dry. Sweet and honeyed, but dark. I thought of tar, actually. I boldly proceeded, though. Also, the leaves are gorgeous. So long and twisted.

I’ve enjoyed four infusions and counting of this in my gaiwan at around 180 degrees but for no measured steeping time. I think it’s increased slightly each infusion. It turns out to be light compared to what I was expecting. Sweet and toasty, I’m thinking roasted barley. Really nice.

This tea has a very full flavor that is quite nutty for this first infusion. I’m looking forward to see what other flavors I get in coming steeps.

I decided yesterday to go through my three Da Hong Paos, so here is the second installment!

Like yesterday, this is brewed grandpa style in a large mug. The color of the first infusion was a nice deep red color, and had a surprisingly light roasted aroma. The taste of the first infusion was interesting, with a very bold roasted taste, with dark chocolate notes that linger along with the typical Wuyi mineral aftertaste. Also, the aftertaste really lingers with this tea, somethings hanging around in the tip of the tongue and the hard palate for up to a whole minute! This is definitely better than the last time I brewed this tea.

The second infusions was surprisingly dark, a nice dark amber instead of a deep red. The aroma also changed so that while it retained its roasted quality, it began to smell a bit sweeter, possibly fruit or caramel. The taste definitely has more of a caramel taste to it, and the aftertaste has mellowed out, and now only contains hints of the chocolate, which linger for about 15 seconds.

The third infusion is a lighter shade of amber, bordering on caramel. The aroma is now definitely caramel and hints of fruit. The taste has really mellowed, with prominent caramel and fruit notes. The roasted flavor is still present, but not nearly as strong as it was. Also, the aftertaste has become purely mineral flavored now. All in all, this was a very balanced and pleasant infusion, and much better than the first and second.

The fourth infusion is actually better than the third. The aroma was pretty much unchanged, and the color was only a little lighter, but the flavors was more balanced. The sweetness of the fruit and light floral notes contrasted well with the weakening chocolate and roasted flavors, resulting in a very nice cup of tea. It wasn’t too sweet or too bold, but it doesn’t have the same variety of flavors that the Big Red Robe from Verdant did during its peak infusion. Regardless, is is a very good cup of tea.

Given how well the tea leaves had been holding up, I didn’t expect this cup to as weak as it was. The color and aroma were greatly reduced, and the flavor had degenerated into a rather bland – yet still surprisingly sweet – generic Oolong. Granted, the tea still retains the Wuyi aftertaste, yet even that has been greatly reduced in intensity.\

The final verdict about this tea is that while it is very bold early, it very quickly loses its flavor after its peak, and becomes quite bland. Still, it is much better than average, and I wouldn’t mind buying this again in the future.

Experience buying from China Cha Dao: I responded to an offer on Steepster for free samples. Received exactly what was stated in the offer: fresh tea and very generous sample sizes. On their website on eBay they have a good variety of tea for reasonable prices.

Packaging: small, clear bags with small label printed with the full name of the tea.

Dry leaf: looks and smells the same as the other Wuyi Oolongs teas in this series: long slender dark brown leaves with a roasted aroma that reminds me of the smell of burnt gunpowder from my cap gun when I was a child.

Color of liquor: pretty much the same as the other Wuyi oolongs: medium brown—like a lightly roasted coffee.

Wet leaf: aroma is mild and pleasant. Most of the leaves were on top, the rest on the bottom of the pot during the first steeping; all were on the bottom for the remaining steepings. Most of the leaves and buds are whole, many are large, and there are a few broken pieces (probably due to transport and handling); they range in color from dark green, through brown, to very dark brown (almost black).

Flavor: roasted and a little sweet.

Overall: Like the other Wuyi Oolongs, I liked the second and third steepings the best. The flavor comes out more when it cools. This tea is touted as Special Grade, and yet I can’t tell the difference between this grade and the standard version of Da Hong Pao. Like the other version, it tastes rich, robust, fresh. It’s good, but to me it doesn’t set itself apart from the others in this series.

This has a nice scent to it. Larger than the 2011 Da Hong Pao. It has the Oolong toasty scent with a teensy tiny bit of clover sweetness.

The taste also strikes me as stronger. A dark “Oolong flavor” with a taste of charcoal on the back of the tongue. An almost unnoticeable sweetness at the tip of the tongue now and then.

While I tend to like the darker and stronger Oolongs, this one isn’t for me. Nice tasting and definitely recommendable to others, but too much charcoal for my preferences.

this s a Awesome Oolong.. I Brewed this leaf in my Ming Xiang Cup.. The leaf is long and dark, have a rice/veggy smell is the best i can describe it. I brewed for 3min at about 190f.
The color was a red brown very pretty.. The cup nose (smell) is of cooked rice and Tea but not like genmacha. Good sweet taste I get a little veg and a really nice tea and sweetness on the after taste. I will give it a second and third infusion to see if I can draw out some good tea.