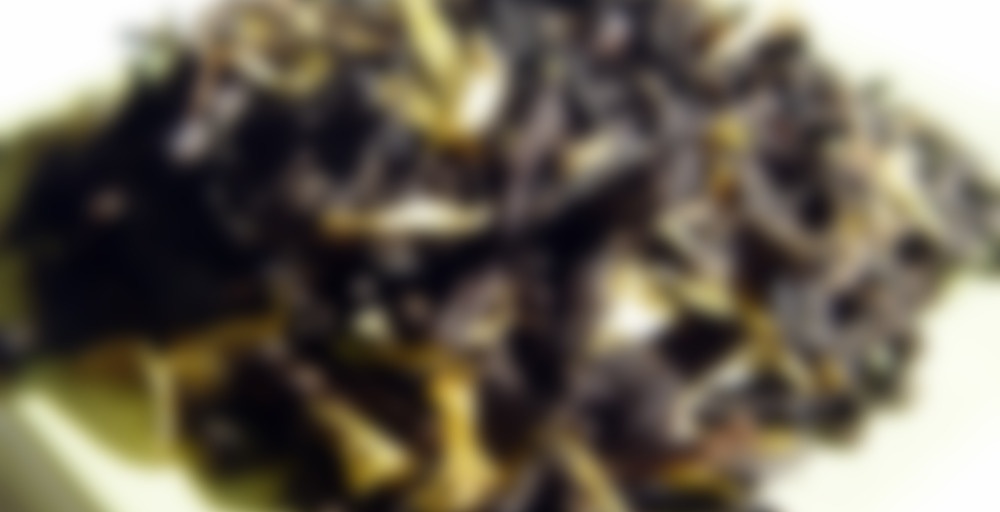 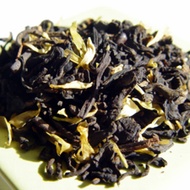 Aroma While Brewing: Sweet and herbal with the aroma of chrysanthemums and mandarin oranges.

I’ve quite enjoyed this one, and after tonight it also has the boyfriend stamp of approval.

I agree with that, but that’s also what I’ve seen in NBT’s orange pu-erh.

The crysanthemum is an extra aspect in this one, obviously, in comparison with NBT’s orange pu-erh, and for someone who’s not really a great fan of floral scented stuff, it’s actually a quite controlled one. It doesn’t really cross completely over into soap or perfume-like qualities, which is a good thing. It doesn’t get to be too much, but stays at a level where it’s an interesting aspect of the flavour.

I still don’t know, however, if it’s interesting enough, and I’m still leaning heavily towards the flower-less NBT. I can, however, deeply recommend this one, and I can totally see myself getting another round of this one in the future, just for the sake of shaking things up a bit.

I found a couple samples for Chi of Tea in my cupboard – no idea how old they are. ¬_¬ Clearly this is a sign that I need to concentrate on drinking up all my older teas and samples.

The scent makes me think of bubble gum, which is a bit odd as I’m used to pu-erhs smelling very earthy. The earthiness comes back in the flavour, though it’s fairly mild compared to some pu-erhs I’ve tried (admittedly my experience is pretty limited). I can taste the orange flavour clearly, though it’s more like a sweet mandarin orange rather than a sour, acidic navel orange type of taste. However I noticed that each sip ends on a weirdly dull note that I’m not sure I care for – maybe I just need to steep the tea longer or hotter.

It’s been a long time since there has been any activity at all on the Chi of Tea front, hasn’t it? I looked at their site and everything is out of stock. And I mean everything. I wonder if they’ve gone out of business…

Well from the last post on their blog it sounds like things got shook up pretty badly in the earthquake/tsunami that hit Japan last year, so maybe that had something to do with it…?

True. They were relatively active before that, so if they make a come-back, perhaps we’ll hear about it.

On the third infusion of this and loving every moment. I’m so glad I took advantage of Chi of Tea’s samples offer and if the other two teas are as good as this I will definitely be ordering from this company.

The first two infusions (2 and 4 1/4 minutes respectively) had identical color and flavor: a deep red liquor with an earthy-sweet and slightly floral orange flavor. The third infusion (7 1/2 minutes) has a slightly lighter, deep peachy-red color with a slightly lighter flavor.

The orange scent is really strong, which I apprecaited. I couldn’t pick out the chrysanthemum, but the cup did have extra depth. I found this pu-erh almost a little too strong for my tastes.

Not a bad cup, but not my cup of tea.

I’m a huge fan of pu-erh. I haven’t been a fan of flavored, especially fruit flavored ones in the past, such as teavanas strawberry slender that they served me once when I asked for pu-erh.. ugh. It was the worst tea I’ve ever had. I do, however, trust Robert ‘s taste for turning me onto pu-erh in the first place so I was interested to try this. I’m only on my first steep, but it’s a delightfully interesting blend of flavors. I think the orange and the pu-erh really work together in this.

Boiling 5 min, 0 sec
Yours I Like This
2 likes
3 comments
Edit

HA! A person who doesn’t like flavoured pu erh but still think that orange is a good combination with pu erh! I’ve long held that opinion myself and now I feel so confirmed.

Certain flavors go well with puerh. Orange does well with most any tea in my opinion. However, my favorite flavors with a dark rich puerh are vanilla, caramel… lots of cream and sugar… or just strait!

Sweet flavours? I’ve never seen that in a pu erh… Interesting! I do have a caramel black that I’m more or less addicted to. Thanks for that tip, I’ll keep an eye out.

Braved the snow drifts to get to the mailbox and my efforts were rewarded with samples from Chi of Tea!
While this is only my second Pu-erh ever, there are many differences in this and the bagged I tried yesterday. I have so much to learn!
The characteristic earthy feel is there, but pretty subtle. The orange is on top, with the Chrysanthemum close behind.
The orange channels blossom rather than zest, a less mature presence than ripened peel. Brewed, it is a dark, coffee-brown color.
After the sip, the orange lingers and draws me back for more. I really like it and am a little surprised, it is much lighter than the other
Pu-erh I have tried.

Soapy! I can pick out the orange but it’s buried in a strong soapy smell and flavor… I love puerh but couldn’t even finish the cup. Looking at everyone else’s reviews I’m wondering if I somehow got a bad batch.

You’re not having any tea luck this morning! :(

its the same batch as everyone else, could there have been actual soap left in the cup or water somehow?

Chi of Tea: good question(!), but there was definitely no soap in the cup or water. I think it might be the orange flavoring that smells and tastes that way to me. I still smell it in the dry tea. Thanks for your response.

Oh, yum. I am loving the combination of what tastes like orange zest with a subtle presence of chrysanthemum, and of course the pu-ehr. This isn’t one of those ‘cave moss’ pu-ehrs, but a light tea with a dark (lookin’) brew. Really delicious. I love that the orange isn’t overpowering, and that despite not really digging plain chrysanthemum tea, I can enjoy this. Chi of Tea gave me this as a bonus sample and I am thanking them in my mind right now. Of course, this is on the re-order list now too. :)

I received this as a free sample a while ago and I don’t quite know why I haven’t tried it before now.

The scent of the dry leaves is very soapy and the orange overwhelms the chrysanthemum. Hmm. Not a good sign.

The liqour is a very glossy dark brown but it still smells very soapy (I can smell the chrysanthemum a bit more now though).

I wanted so much to like this, but I just don’t. I love pu-erh and although I can taste a lovely pu-erh base, the flavouring tastes a bit like parma violets (which I really can’t stand). Pretty much everyone else seems to like it though – did I just get a bad batch? Hmm.

Smells definitely of orange when dry. Like orange vitamins. Brews into an orange tinged liqueur. Mildly sweet, couldn’t really taste the florals. Reminded me overall of chalky orange medicine. Not altogether bad, but it won’t go in my normal rotation. I don’t care much for pu-erh though and I did like this better than the pu-erhs I have previously tasted. Not as earthy.