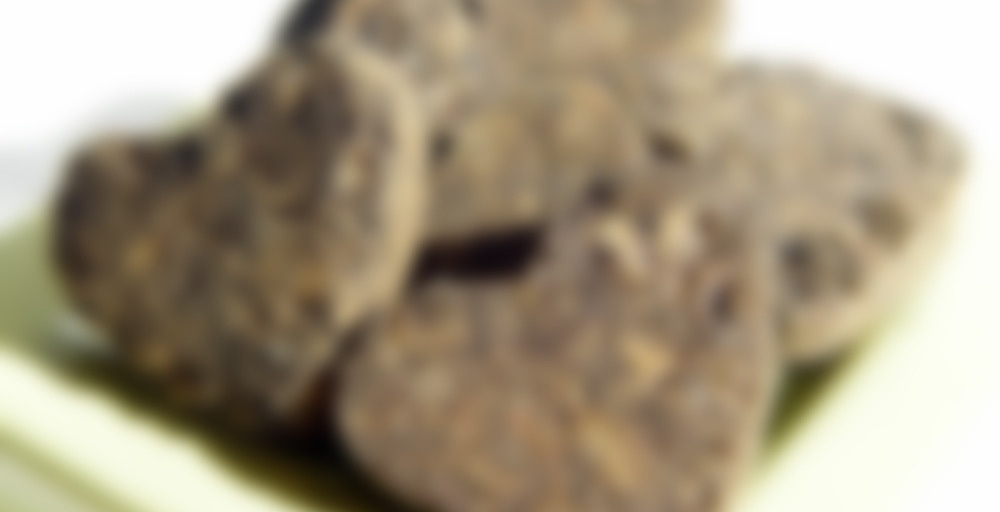 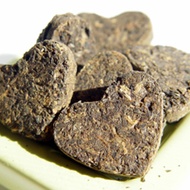 Fall in love with these Artisan Black Pu-erh shaped hearts. Handmade by tea artists with a rich blend of aged black Yunnan pu-erhs.

Each heart will infuse up to 2-4 cups of tea. This tea is a rich bold black tea that handles cream and milk quite well. The aroma and taste is very earthy and rich. A bit stronger in taste than most Pu-erh and quite sweet naturally.

Help, I’m suffering from internetshop-initis! I’ve had an A C Perch’s order come in recently and now a Chi of Tea order as well. I couldn’t help it. It was like the mouse jumped me and twisted my arm or something. And it gets worse. The Chi of Tea order? Two things of substance. One a stock-up of the Keemun and the other a smaller pouch of Lapsang Souchong, because I’m always moderately interested in sampling a good LS. That doesn’t sound so bad until we come to the actual unpacking and putting away of new loot, and finding in the Bits’n’Bops Basket one half pouch of Chi of Tea LS that I had clear forgotten I had. I could lie and say I was stocking up, but that would be all too easy to see through as neither the quantity of the new pouch nor the old one corroborates the story. Let mocking commence.

So I confessed to the boyfriend and was indeed mocked. “You have bought so much tea,” he said, “that you’ve tried everything in the world and are now starting in on the second circuit.”

All in all, I got off easy.

Anyway, with the Chi of Tea order was also the three random samples, which has led me to consider when exactly it is one can say to have won the Sample Lottery. Is it when you get samples of something good you’ve tried before and know for absolute fact you’ll enjoy, or is it when you get something you wouldn’t otherwise have considered and have never tried before? My personal jury is still out on the issue.

At any rate, I got some good samples. Two tried, tested and true and one new one which I considered when making the order but ultimately decided to wait with and think it over.

This was one of the Triple Ts. It’s funny, this one actually. I have a pouch of them and everytime I’ve made an order I’ve received three more hearts in a sample. They’re quite nice so I’m not complaining, but it puts me in an amusing situation where it seems like the more I drink, the more of it I’ve got. (This is because I haven’t had it often, mainly around the times when I’ve received an order)

I was afraid today’s brew, first steep very nearly forgotten, was going to be ridiculously strong. It’s possibly that I’ve managed to put my tastebuds in a coma with throat lozenges (am still apparently attempting to expel own respiratory system via oral orifice), but it strikes me as incredibly smoooooooooth today.

It has that honeyed note on the finish that I’ve described before. A rather interesting note of strongly flavoured honey. I know it’s just a pseudo-note, that honey, but it still feels really nice in a throat that is quite sore from repeated expelling of air in a forceful manner.

You know, every time I have one of these I wonder why I don’t have one more often. I suspect it has to do with the fact that whenever I do have one, it keeps me in tea for the rest of the day.

Do you brew one whole heart to a 12 oz cup or break up the heart? I have some of this on the way and I have no idea what to do with it.

My cups hold about a half liter. I’m not sure how large that is in oz-es (we’re completely metric in Denmark so I haven’t a clue how much or little it is), but no, I never break them up. I just use a whole one and really short steeping times. Some people, I’ve seen, break them to bits first, but I’ve found they fall easily apart on their own when made wet so I usually don’t bother.

thanks. mine arrived today. I think i was expecting them to be much larger.

Jillian, yes, that does put it into perspective. Thank you. :)

Kristin, yes, I was expecting them to be larger as well. If you make them like I do without using some sort of filter-y stuff around the leaves, I would advice using a strainer when pouring. The bits, when it breaks up, are quite small.

These cute little hearts are perfect for Valentines Day, but really I’d enjoy them at any point in the year. They make it extra- fun to make a cup of tea. And the cup that results is great- not too smokey, or too dark, just a good rich cup of what’s almost like an oolong to my palette. I had an acupuncturist who recommended pu-ehr as a beauty treatment (drinking it), and also for stress-relief. While I don’t know about these claims, I’m enchanted by the little hearts, and even took a photo of them before I brewed one.

Any fishy flavor in this one?

Not that I could taste, and I am hypersensitive to fishy smells and tastes. Yick.

Yeah, fish flavored tea is not good. But those hearts are just so damn cute. Did you get any of the Vanilla Nilgiri? Nom!

I didn’t! But after reading your review I now need to try that one. Although right now I seem to have too many caffeinated teas and not enough for the evening.

I’m also swimming in black teas w/ caffeine or at least I will be soon. I just placed a $50 order with DavidsTea (a present from Mike for my birthday in April). At least 1/2 of that order is black tea.

Oooh what did you get?
Yeah, I need to find more decaf black teas. I mean, I drink at least half of my daily tea after 5pm.

I begged to order now in case it takes a month to get here from Canada through customs. :)

This has all the lovely characteristics of the first steep, and the flavour is not lightening up at all. I’m getting a slightly malty flavour as well. I’m going to put the rating up. This tea seriously deserves it :D

I have this right between the two Yunan/Hunan golden teas I have rated because this tastes far more like a golden needle than a pu-erh. I suspect this is because the aging time is very short.

I really like this tea, and the heart shaped packs are very cute. Just don’t expect it to taste much like a truly aged, fermented pu-erh.

PS: THANK YOU to Chi of Tea for the free samples of this and a few other teas!

Do you break apart the heart (since it says it will make a few cups) or is it just that you can resteep it for several cups?

No, we just made a small pot with the whole thing and then re-steeped it a few times.

I almost never make tea one cup at a time.

Chi of Tea’s Artisan Heart Shaped Mini Pu-Erh’s are super adorable and cute. The miniature hearts are approximately the diameter of a US quarter, and composed of dry tea leaves tightly compressed into heart shapes. Overall the taste is strong and earthy, a bit like a brisk black tea plus a little sweetness and a distinct smoke and camphor aroma which lends it an appealing character. If you enjoy strong black teas, this would be a great introductory pu-erh tea to try. For pics and full review: http://www.leafjoy.com/2011/02/review-artisan-heart-shaped-mini-pu-erh-chi-of-tea/

I don’t feel entitled to give this a number rating, but I don’t know how to review it without the rating, so please feel free to ignore the number.

This is not my type of tea, but it is probably good for those who like Pu-erh. (I’m fairly particular about what I like in tea——my tastes are not refined, but I am picky.)

This tea has the earthy scent, and also tastes somewhat earthy, which I don’t enjoy. However, it is a somewhat pleasant tea to drink.

I’ve only steeped it once, so far, and I am surprised at how flavorful it is with such a quick steeping. I prefer it with a touch of milk, but no sugar.

The presentation of this tea is my favorite! It is soooo adorable & just seeing the little hearts is enough to cheer up anyone!

So, while this is not at all my type of tea, it would probably be a good choice for people who are interested in Pu-erh teas, or it would make a great gift for tea lovers.

Thanks to Chi of Tea for the sample!

If you don’t want to put a numbered rating on your post, it’s not a problem. The slider for the rating is optional, so all you have to do is ignore it. :)

Oh, I wish I would have known that before I submitted my review.

Do you know if it can be undone?

Valentine’s made this an easy choice of after-dinner tea.

The hearts are adorable, and the tea is very tasty. It’s robust and earthy and tasted like a strong black to me. It was a bit heavy after a large meal, but good with dessert.