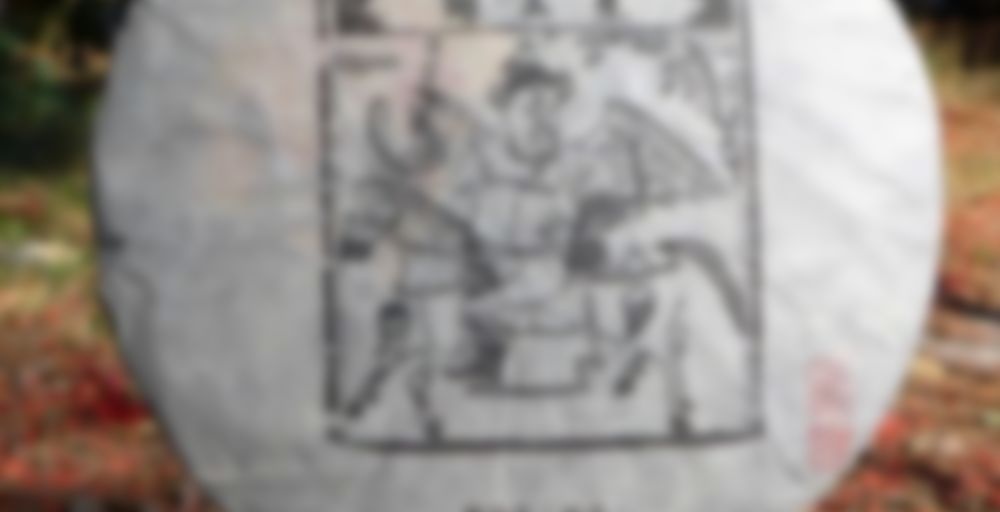 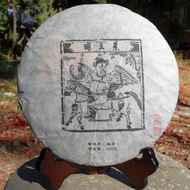 Material for this cake came from a small Bulang village in Bada mountain. This village have very small quantity of tea trees that grow in the forest. Trees are relative old, but farmers cut the branches when trees get too tall. Tea trees are kept at easy-picking height because the tea is picked and made by old women in this village. They follow ancient ways to produce tea. Many of them make tea only for themself.

We selected and bought good maocha from different families. They picked one bud and two leaves. This tea is nice example of old-time puer tea and traditions of Bulang minority.

Taste of this tea is full, strong with bitterness, huigan is fast and sweet. Slightly smoky in the taste, like in 2013 and 2014, owners of 2013 version of Bada Lao Yu will know this slightly smoky taste will go fast out from the taste.

Been airing this one since I got it. I grabbed about 11 grams out to brew with. I gave it a good long rinse. First three steepings are smoky, bitter and strong. I think this is one to just put away and age. Material looks decent for the price paid. There is some floral hayish lingering in the mouth a bit after drinking this one.

I had the 2015 Laoyu. There’s some good base material underneath the smoke – which isn’t too offensive, IMO. I haven’t decided how I feel about it yet, but I do think it’s well worth the price.

I am just hoping it will air out quickly.

Mine aired out within a few months really.

Perhaps storing the cakes in a crock or ceramic container with a non-glazed inner wall will help speed that up?

I have just had it sitting out. I may try to get it in something with some humidity to it.

I am going to have to say that this at the moment is too dry and astringent for me. The material is compressed on the tighter side but there would need to probably be some storage adjustment with this one so it develops over time to something I would like… no sweetness which is a downer for me, but not all tea with have a sweetness and that is fine because not all tea will be for my taste buds.

This is the first tea I got to sampling out of the recent Chawangshop group buy put together by Andresito. I was a little worried about it after reading Dr. Jim‘s tasting note, as I am not a big fan of really smoky teas. I sort of figured I’d try this one first and “get it out of the way” before moving on to some of Chawang’s other shengs. The dry leaves did indeed sport a bit of a smoky scent, along with straw and maybe some tobacco. After a rinse, the smoke aroma was more noticeable, I’d say at a moderate level, but I could also smell some sweeter notes underneath.

The first couple steeps were visually unattractive, being a bit cloudy. There definitely was a smokiness to the flavor, especially in the first 3-4 steeps, but it was not overpowering or gross. Instead of tasting mostly like smoke, the smokiness lent a savory layer to the tea’s flavor. The finish was slightly woody with a fast and sweet huigan (I think that’s exactly what it says in the tea’s description on the site, but it’s true). Steeped as carefully as one might normally brew a young sheng, bitterness was never an issue, though around the third steep, right as the smoke was starting to fade from the flavor, a bit of astringency started to build up in the front of the sip. It reached a peak around the fifth steep, and dropped off from there. I took this tea probably around twelve or thirteen steeps, and even near the end, it could punish with some bitterness if I accidentally let it infuse too long. That suggests it probably had a bit more to give than when I stopped it. The sweet finish and huigan lasted throughout as well.

I was pleasantly surprised by this tea. I didn’t find it too smoky, though the early steeps are not the most pleasant to my palate. This cake comes in at a very good price, and if others’ experience with the same tea in past years holds true, the smoke should be gone within just a couple years. I certainly believe that, based on the character of it in my sessions with this tea. I imagine it would age decently well, with the smoke contributing to a greater complexity of flavor, at least in the short(er) term.

Nice review. This one wasn’t too smoky for me at all. Nicely robust tobacco/bitter base and good longevity.

Thanks! I agree – not too much smokiness and good flavor/longevity.

I think this tea is instructive to newbies in the young sheng puer world. Huigan is actually more important than initial flavor since it will stay with a tea through the aging process, whereas taste will evolve within just 6 months!

This is really smoky. I actually like smoky teas, and thought this one was pretty good in a smoky/woody style. Got a little bitter in the later steeps, but the early steeps were very approachable (did I mention the smoke?). I liked it , but others might not.

I have intentionally left this one out after the vendor description mentioned the smoke. It will subside in a year or two I think.

I learned this from one of their previous productions.

This production is one Chawangshop gets with and without the wood smoke. The smoked one is the wood fire, and is cheaper than the cake made without. I have a smoked one of these from a few years ago. The smoke airs out for the most part. I can hardly detect it now,

agree with cwyn. smoke in 2015 is already fading into deeper flavors of complexity, but doesn’t taste like ash. I expect a few more years it will be barely noticeable.

I liked the smoked and unsmoked versions equally, but they’re different teas IMO