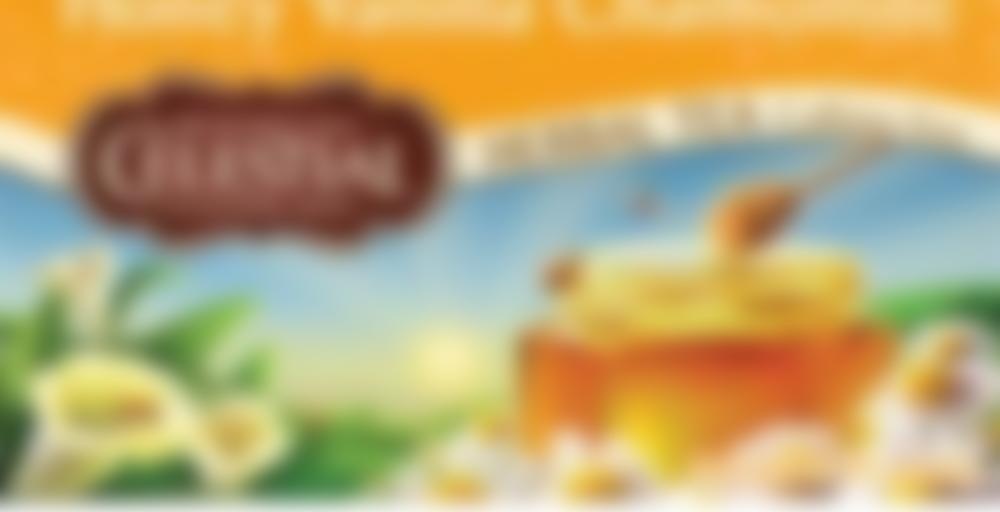 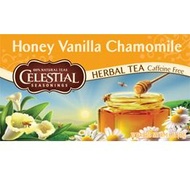 by Celestial Seasonings
71
You

with 112 Ratings Rate this tea Rate This Tea

Combining the sweetness of honey and vanilla with comforting chamomile, this herbal tea recipe benefits both mind and body.

“Our satisfying Chamomile tea is cherished by many as a soothing antidote for life’s complications. We’ve added the delicious flavor of creamy, nutty vanilla, along with golden honey and just a hint of refreshing orange to complement our perfect blend of Egyptian and Mexican varieties of chamomile in this relaxing herbal tea.”
— Charlie Baden, Celestial Seasonings Blendmaster

Hot Tea by the Cup

Last night all I wanted to do was curl up with my book (The Tenant of Wildfell Hall), my blanket and my cat. I made myself a cup of Honey Vanilla Chamomile because I didn’t want to pay close attention to preparing my tea. Is that bad? Anyway, it was a decent herbal tea. It was sweet and comforting, and it smelled lovely. Between my tea, my book (which is really, really good) and my cat curled up next to me it was a nice relaxing evening.

I have this tea in my cupboard too! Smells really good!

Now I like this tea even more… My daughter woke up feeling sick, and this tea is all she’s been able to keep down today. I’ll have to remember to keep a box of it in my cupboard for sick days.

I have to add that to my to-read pile. I haven’t read any Anne yet!

Jacqueline~ This is the first time I have read any work of hers. Anne’s style is so different from her sisters, but it is just as good.

I am going to load it on to my e-reader this weekend! I can’t contain myself!!! :)

Enjoy! Let me know if you want to compare notes after you’ve read it. I love talking about books!

Wow – I totally called this – it has Egyptian chamomile! After drinking it in a DAVIDsTEA blend I guess I have a taste for it. But this is much cheaper than any DT blend. Intersting.

Thanks VariaTEA for sending some bags my way!

I am glad you enjoyed this. It really was not for me. It tasted like a strange chamomile lollipop. I have more if you are ever in need!

I personally was not a fan but I don’t particularly love chamomile to begin with. I am happy to share if you are interested.

Oh no, I’m fine, but thanks for asking! You remind me of how I should start drinking more chamomile-based stuff again. :)

Thanks for the offer but I like Mango Lassi a bit more!

i drank this.
herbal tea is just another way to get hydrated for my saturday runs.

because it’s chamomile, you couldn’t pay me….. (peppermint would be another story) BUT herbal tea is good for hydrating? very interesting!

i knowwww i hate chamomile too. but i’ll try anything once. just once though.

Technically all tea is hydrating, although the ones with no caffeine more so than otherwise.

This is a weird combination of nuttiness and sweetness of a lollipop. It’s not bad but I don’t know if it is good either. A strange cup indeed.

One of my favorite bagged teas. I discovered this when I took off on a train from Nebraska to Arizona and stayed at a friend’s house on arrival. He happened to have this in the cabinet and offered me some. I was pretty hooked on this sweet concoction. Especially it being the only tea I’d had in quite a while after selling my loose leaf tea collection. But here a year later it still has a home next to my loose leaf teas.

Bags smell of mostly licorice. Once submerged in hot water the aromas unfold. First nutty vanilla, followed closely by honey, citrus, and lastly the base note of chamomile.

I take a sip and am surprised by how naturally sweet this is. All of the different scents have morphed into a candy like drink with a light aftertaste of bubblegum. But once a bit of sugar is added it transforms into orange blossom honey water. I love orange blossom honey. This is nice for a bagged tea! A splash of milk and it tastes like warm milk & honey minus quite a bit of the sweetness. I don’t like to leave the bag in for an excessive amount of time like some have said because I start to taste a bitterness and the chamomile starts to show itself in an unpleasant way. I enjoy this tea when I’m waking up, about to go to bed, or during peaceful moments of the day.

Another tea from a family member’s stash: This was quite a surprise! I don’t particularly love chamomile or vanilla, but this combination sounded interesting. It was sweet (as you might expect), and I liked it more than I like chamomile tea or blacks flavored with vanilla. It makes me want to try their sleepytime tea with vanilla. Good tea!

I’ve had it straight before, but I wonder if it’d take a little milk. I’m thinking that would give it a very children’s-tea-party taste.

Oooh! I now that you mention that, I wonder about it, too!

I’m on my last cup of this tea. I have this weird tendency to drink the teas I like least first, even though I have teas I like better. I think it is because even though I know better, that I don’t have to drink them, they are in my cupboard taking up room and making me feel guilty for wanting something else. And it isn’t like I really despise the ones I don’t like, I just have other preferences. So I drink the ones I like less first so they are gone faster.

This tea has been in the “like less drink first” category, along with a plain old CS Chamomile, so they have been my most consistent nightly beverages of choice. And I won’t particularly miss this one. It might be because the tea may be a bit old, but I never really tasted honey or vanilla. I got lots of chamomile, but none of the other flavors. So I’ll bid a rather uninterested adieu to this one, glad to have one fewer box in the tea cupboard.

Boiling 6 min, 0 sec
Yours I Like This
4 likes
2 comments
Edit

I get the drinking pattern. I do the same. I just want to get rid of the ones that I know are just ok to me so that I can really enjoy my favorites later. : )

I do the same thing….Drink the ones I don’t like first, while my beauties sit waiting. :)

Uh I like this bagged tea. Don’t ask why or anything but I do. It is a nice throw it in the cup when you don’t want to work at it vanilla honey tea that is warm and yum. So there. AND it comes from down the road right here in Colorado…ha!

Lucky being so close to CS! :) I love their teas in the evening!

It’s nutty and gently honey-sweet, with definite notes of vanilla and chamomile. You can note all the distinct flavors, but they are blended in such a way that they work together perfectly. It’s simply beautiful.

I think I’ve found it. That perfect chamomile for me. And it’s been sitting right there at Meijer this whole time. sigh Yup, this could be love.

Sipping this one again tonight and finding that it’s got a sort of sickly sweet aftertaste in the back of my throat. Otherwise I still like the tea, but the way the taste just sticks at the back of my throat is a little… ick. I don’t know if it’s the chamomile or the flavourings for the honey or vanilla.

It might be the chamomlle. I haven’t tried this particular tea but some chamomile teas I’ve tried have been almost sickly sweet-tasting.