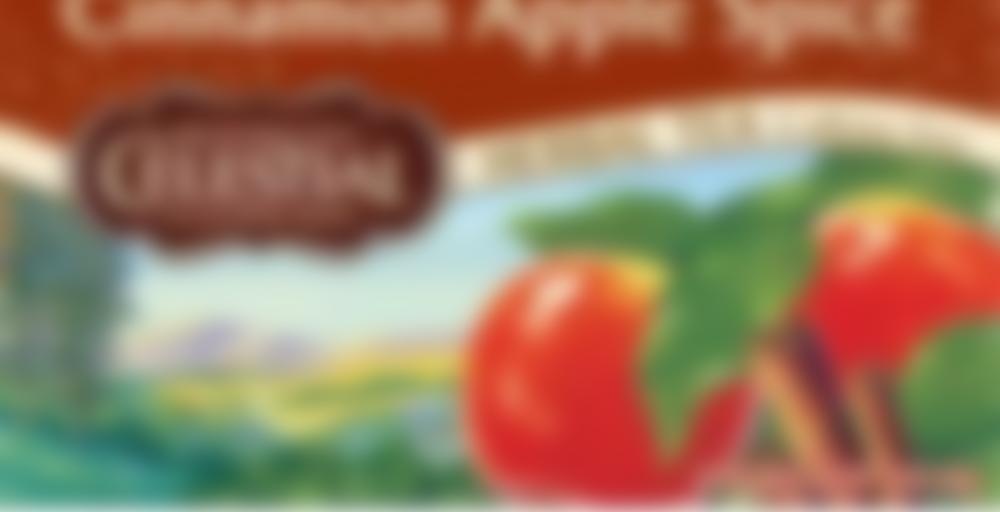 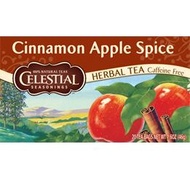 by Celestial Seasonings
59
You

with 101 Ratings Rate this tea Rate This Tea

“This lively blend is dominated by an aromatic burst of sweet and spicy Vietnamese cinnamon and bushels of juicy, all-American apples. There’s a toasty chocolate note and a hint of creamy butterscotch in the finish that complements the lasting taste of apples and cinnamon – making this tea comforting and invigorating all at once!”
— Charlie Baden, Celestial Seasonings Blendmaster Since 1975

Screw it. I don’t care if this IS a cheap, low-end teabag – I am quite enjoying it. The description is mostly dead-on. This is all sweet apple and cinnamon with a hint of creamy sweetness on the back end. I’m not tasting any chocolate notes though. This is a nice, caffeine-free evening tea for chilly weather.

It doesn’t matter what it is, or what others think. All that matters is that you are enjoying it. :)))

Welcome to the Cheapster Steepster’s club. Room for one more. I am smitten with Candy Cane Lane at the moment.

Wow, tough crowd, eh? =) So, ya. This is cinnamon tea with some apple sweetness. If you’re looking for the cinnamon to modify the apple with grace and subtlety, you’ll need to steep elsewhere.

But y’know? I like it. I like that I don’t need to put any sugar in it. I like that it’s fragrant and tastes strongly of, well, itself. I just leave the bag in ‘til I’m done drinking, so I’m not afraid to steep. I didn’t taste any bitterness, but maybe that’s just me.

I kinda feel like I should take my taste buds to the Met, Broadway, or a Zagat-rated restaurant to, I dunno, get them some of that culture stuff, or something. =]

[Edit, six months later1] I originally rated this a 70.

I like this one. I’m a big fan of spice teas, anyway. The cinnamon is definitely not subtle here, it has a starring role. Good stuff!

I have this and like this too! I have yet to log a note on it though. But it’s like an old standby that gets pushed aside to make room for the more exciting loose leaf’s. :)

this is the cinnamon bark potpourri sachet your grandmother warned you about;
a fiery tisane with stentorian sinus-clearing capabilities, and a rabble-rouser at that.
i wouldn’t be surprised if Celestial Seasonings started bagging wasabi powder (the new matcha?)
okay, this is not that bad, but it is strong and packs quite a punch, though it’s not a problem for me considering i love spice. if you’re in the mood for something extreme and enjoy cinnamon, you’ll love this.

to stave off a cold, i brew 2 sachets in one cup, and add the juice of half a lemon, a few slices of fresh ginger, as much cayenne pepper as i can stand, and plenty of honey. well, you might want to go easy on the honey since this tea is already naturally sweet but really, do what you like because it’s your tea. i mean, assuming you decide to follow this recipe for chasing away an upper respiratory infection. it may not work in time, but i think it’s worth a try.

actually, 2 bags of this stuff on its own will probably do the trick.

but i’m not even sick (or on the verge…knock on wood), yet somehow this makes me think of medicinal home remedies. the flavor is pretty nice too…it’s sweet, spicy, and has an apple note that no doubt gets overpowered by the Vietnamese (Saigon?) cinnamon, but i’d say this is good for what it is. if you’re hoping for warm, comforting apple pie, this may shake you! ;) try Teavana’s Caramel Almond Amaretti, instead.

life hack: if you ever find yourself in the throes of a struggle and are short on mace, throw a hot cuppa this on your assailant! come to think of it, i might keep a box of this in my purse…

OMG, the thought of a wasabi powder? I want to sneeze, lol.
Haha! The healthy organic version of mace…treat your assailant with care…

hahah, yes it is boychik! it’s pretty strong when brewed double-strength. adding cayenne to the mix is just asking for trouble, but that’s only in dire situations ;p

LOL teafairy, i know right?? wasabi really burns my nose, but even worse than that is Chinese mustard!
a few times i’ve accidentally ingested an entire blob of wasabi, thinking it was part of the avocado that my veggie rolls were wrapped in… not so.

well maybe it was half a blob, but still shocking.
it’s not that i mind wasabi, i just don’t like being surprised by it! ;p

which brings me to a question: what do you call a (piece) of wasabi? a blob? a dollop?

I really tried liking this tea. I really tried. It smells nice and the apple flavor is there, it’s juicy and refreshing. What’s wrong? That damn cinnamon! It’s too overpowering and pungent that borders on “artificial”. I guess I cannot blame them, they do say Cinnamon first in the title. Maybe I incorrectly assumed what I was going to be drinking? I wanted apple first,…..then a little bit of cinnamon next..maybe vanilla to round it out?
Another review said it was like “drinking Big red Gum only with apples”..that’s perfectly states what this tea is about. If you like “Red Hots” or any spicy hot cinnamon candy then this is for you
Oh, well

Hey stranger, if you feel like sharing some of this I would gladly take it off your hands. I love cinnamon!

It’s what they serve at work. I’ll bring some home

Haha! Add in a slice of a certain pink cake & I might pay you for it!!!

Mmm I always forget how much I like this one. I felt lazy and tired due to my pain pills (which suck. Good thing is I go to the doc’s office tomorrow so hopefully they can help..) so I dumped some hot water over this.
The aroma is SO strong with sweet cinnamon. The flavor is ok. It’s strong on the cinnamon side but it is like a sweet candy cinnamon. The apple is present and is slightly crisp and sweet. Kind of happy I had this on hand tonight. Now let’s hope I get some sleep :/

This is not the greatest tea ever by any stretch of the imagination, but it is quite nice before bed with a bit of honey and cream. The taste is heavy on cinnamon with just a hint of apple and I can see why some may not be fond of this tea. However, this is a decent caffeine free choice for around $2 a box.

I just realized this is like drinking Big Red gum…only with apples.

Hey,this one is awesome!I LOVE how the cinnamon sing out here,the natural and spicy sweetness picks me up during winter times. The tea is fruity and mellow in a very elegant yet bright way,this aspect is much like fresh apple juice mixed with a little pear juice to sparkle a little more~To sum up,it tastes amazingly like hot apple cider with comforting aroma. A must-have juicy pleasure in cold days XD

Love this tea when I have a head cold! The cinnamons strong enough to clear my sinus’s and the apple is a nice after flavor. BUT if I’m not sick it actually burns my sinus so bad I become stuffy and my eyes water! I do keep this as a staple though. Love to have it on hand for when a cold starts, it seems to chase it away real quick. So I guess this would be a medical tea for me.

Delicious. Tastes like hot apple cider. Very fragrant, but in a good way.

My charming friend, I greatly admire the careful and succinct manner in which you publish your reviews on life’s finest mixture of drinkable liquidity!

Why thank you Remmington, but I am nowhere near as verbose as you.