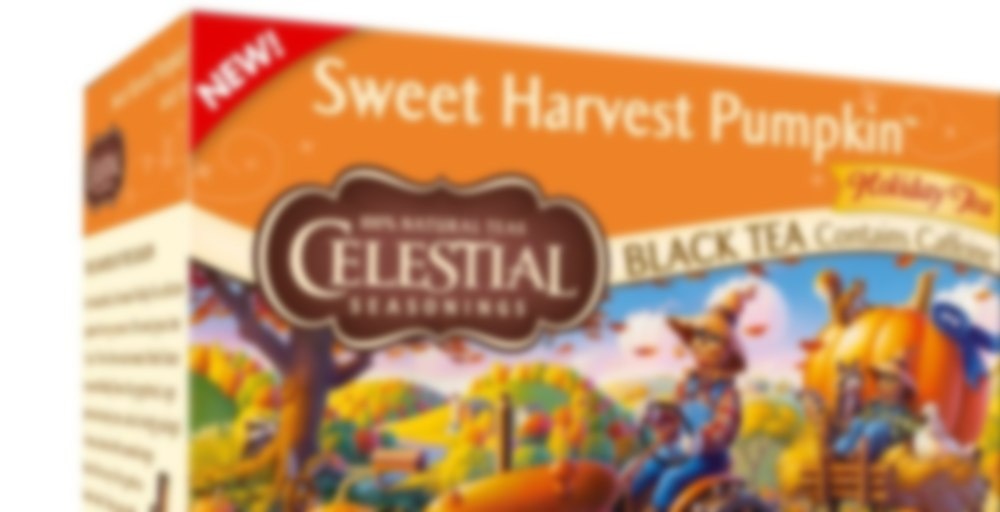 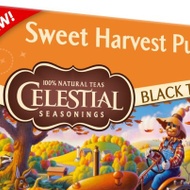 The newest addition to the Celestial Seasonings Holiday Tea Line!

Sweet Harvest Pumpkin features the treasured aroma and spicy flavor of homemade pumpkin pie that will extend the holiday tea season. This new holiday blend starts with black tea infused with the flavor of pumpkin and variety of spices including cinnamon and ginger. Beautiful illustration to evoke those Fall and Holiday memories.

There. That’s better. Two cup pot, 1 bag with a teaspoon of plain Lover’s Leap Ceylon. Little milk. Now I can taste the pumpkin, not just the sweet.

Enjoying it with a picture-window view of my front yard (courtesy of a very gusty wind) that is now lushly carpeted with gold and tan leaves. By the time we get back from church, we expect a 30-degree temperature drop. Looks like a lovely tea day.

My first ever Celestial Seasonings courtesy of gmathis. Thanks. I had no idea what was in this when I brewed it this morning. It smells like pumpkin spice cake. It is very sweet. Now that I know there is Stevia in it, the sweetness makes sense. I can’t decide about the taste. It is something like pumpkin spice cake dipped in milk. It reminds me of a rooibos blend. It doesn’t taste like black tea to me. The spices are a different and interesting take on a classic.

I liked it a lot better after I cut it with a bag of plain ol’ black stuff.

I read your review and I plan to mix the second bag with a straight black tea.

Well, this is quite potent in the spice department. Additionally, when they say sweet, they really mean sweet. It’s not just a cute name.

There is stevia in this blend. After a couple sips I thought, is there stevia in here? It was funny because I just was looking in the thread about stevia leaf, and I am in the minority of not minding it in a blend. It just smells like bad alcohol decisions in DavidsTea blends. I never realized I could actually tell what stevia tasted like on its own just based on that smell.

This one, it doesn’t smell like it until you are drinking it, and it just has that clearly stevia aftertaste. I think maybe the pumpkin pie spices help hide the scent, but it just tastes like there is actually too much stevia used, and it’s a bummer. I was hoping this would taste like pumpkin pie, but it’s too sweet! I don’t know how that is possible.

Other than the stevia, it’s a nice mix of spices, a little different from your usual pumpkin blend. There’s ginger and chicory in addition to the usual cinnamon, nutmeg, and clove. The pumpkin flavor is nice, but it’s just too sweet. I’d rather have to smell the stevia first and have it blend better into the tea than not be able to smell it, and have it as a prominent flavor.

It is much easier to drink this with very small sips at a time. Otherwise the lingering sweetness is hard to take, especially so early in the morning.

Oh… is this a new flavor? I might have to try it.

Yes, it’s not out until the rest of them are in stores too (in “a couple weeks”) but you can buy it from their website

I’d almost like to go by Celestial Seasonings on the tour again just to smell the factory while they’re making this!
Even if you don’t like bagged tea, the tour is fun. Free tastings, a HUGE gift shop (they make alba botanical cosmetics too) a museum, restaurant, etc.

I have always wanted to go there since I was a kid!

I want to go there too! If hockey was going on my boyfriend was going to plan a trip to Denver in December, but nooooo, haven’t heard that plan in weeks now. Millionaires gotta be difficult.

What’s best is that it’s next to Boulder which has tea houses…Ku Cha, the Dushanbe and others. I should do a tea tour next year for the Festival for Steepsters! A whole day from Celestial and Happy Lucky’s to Ku Cha and who know’s where else!

wow it’s a tea Disneyland! Must go one day

After enjoying the other Celestial Seasoning’s holiday blends that I tried, I decided to pick up a box of this as well. I enjoy the flavor of pumpkin, and really love pumpkin pie, which a couple of the reviews for this tea said it tasted like. You can definitely detect a pumpkin flavor in this tea. There is a surprising element of spiciness in this tea also, actually a lot of spiciness, almost like the finish of a very strong chai. There is also a really sweet element to this tea at the end, almost like a sugary sweetness, I can’t quite put my finger on it what exactly it is. I’m really happy that I got a box of this and I think a latte with this would be the ultimate pumpkiny goodness!

Your review is spot on, Josie Jade.
I prefer BEST with the pumpkin creamer , Yum!
On second box in a week…lol…

Oh, pumpkin creamer is a good idea! I will have to try that! :)

When they say “sweet” they really mean it. This got dumped and into the swap box with the other 19 bags.

this is way harsh, and i’m talking about an overdose on the allspice!! yuck!

Am I allowed to write about Matcha Pocky on here? Cause I found some in China Town yesterday and I’m eating some now and they are delicious. Even the biscuit part has matcha in it! Anything made with matcha is just so pretty. That green. :)

Anyways, I’m having this Sweet Harvest Pumpkin thanks to Josie Jade. I’m just tearing through that box of samples from her today. :) Plus I really have a craving for buttermilk pumpkin soup, but I don’t have any pumpkin. :( I do have buttermilk though. I think I’ll make a pudding with it later today.

I saw a lot of negative reviews about this due to the stevia. I actually don’t much mind stevia. It’s not as tasty as sugar or honey, but it’s better than Equal or Splenda. So I added a splash or almond milk to this since spiced teas really do taste better milked up. This particular tea tastes like the inside of a pumpkin pie. A bit of that delicious orange squash flavor. Lightly spiced with cinnamon and ginger. brown sugar? Not too bad. It’s a bit thin though. Next time, I might have to use two bags per cup.

EDIT: Husband just came by and made off with my cup of this. haha I think I’ll leave the rest of these tea bags to him. :)

Oooh I should have bought some when I saw them at the drug store. Guess I’ll have to go back.

If there were real truth in labeling, the name should be “Extremely Cloying Harvest Pumpkin.” Doubt it’d sell quite as well, though ;)
(I’m OK with it as long as I dilute or 1/2 and 1/2 with plain black.)

I think I ended up throwing mine away!

Yeah, like a lot of people mentioned this IS pretty sweet. Also Stevia leaves a bit of a funky aftertaste in my opinion. This does remind me a bit of Bengal Spice and I would say I’m detecting more spice than pumpkin. I added some soymilk to this which made it better, I think. It does remind me a little bit of Bengal Spice but it’s sweeter. I think this would have been fine without the Stevia and I’m not sure why they felt the need to put it in there!

Oh, this is so much better! After the abysmal fail with the Adagio Pumpkin Spice this morning, I needed something to sooth my poor, abused tastebuds.

I added two teabags to my 16oz infuser mug, 4tsp of raw sugar (I have a horrible sweet tooth!), and steeped it for three minutes. Mmm.

While the fresh teabag didn’t smell much like pumpkin, the flavor really comes out here in the steeped tea. This is like drinking pumpkin spice bread, where the cook hit just the right spice balance: enough to leave a tingle on your tongue, but not so much as to let any one spice overwhelm.

Actually, I think I might use a bag to infuse butter for the pancakes I’m making. I’ll let you know how it goes!

Update: If you’re curious at all, here’s how the pancakes turned out!
http://wordsabouttea.blogspot.com/2013/12/sweet-harvest-pumpkin-by-celestial.html

What an idea! (Now…do I have any waffles in the freezer….?)

thank you so much momo for the amazing package of teas! Holy stevia! They should call this one stevia flavored. I’m definitely not a stevia fan. I feel like CS thinks the stevia tastes like pumpkin or something, so that is their idea of pumpkin flavor. The first tea I ever drank was a Celestial Seasonings chocolate chai, so there is some nostalgia there. I do enjoy some of their blends… the ‘Nutcracker Sweet’ especially. I was looking forward to trying the pumpkin as soon as I heard about it! They just went overboard with the stevia. The second steep has taken most of the stevia out, but probably much of the other flavor too. I’d say the second steep seems like it would have the normal amount of stevia you’d find in other teas. I don’t think they put much or any stevia in their other blends, unless they have started doing that now. That’s too bad, because it might have been a decent blend. I wouldn’t have minded all the spices with a better pumpkin flavor without stevia. I’m always up for trying though, so thanks again, momo!

I picked this up on a whim from the grocery store and I have to say it isn’t half bad! It really reminds me of a slightly less sweet, coffee-free Pumpkin Spice Latte. The pumpkin is present, spices are balanced, and the stevia isn’t overpowering. Many of the holiday teas from CS have been hit or miss with me, but this is pretty good.

I need to look for this. Sounds yummy.

oh dear, since it’s local and really inexpensive here (sometimes $1 a box, I’m going to have to give this one a go then. You’re right…sometimes the Holiday ones are fun.