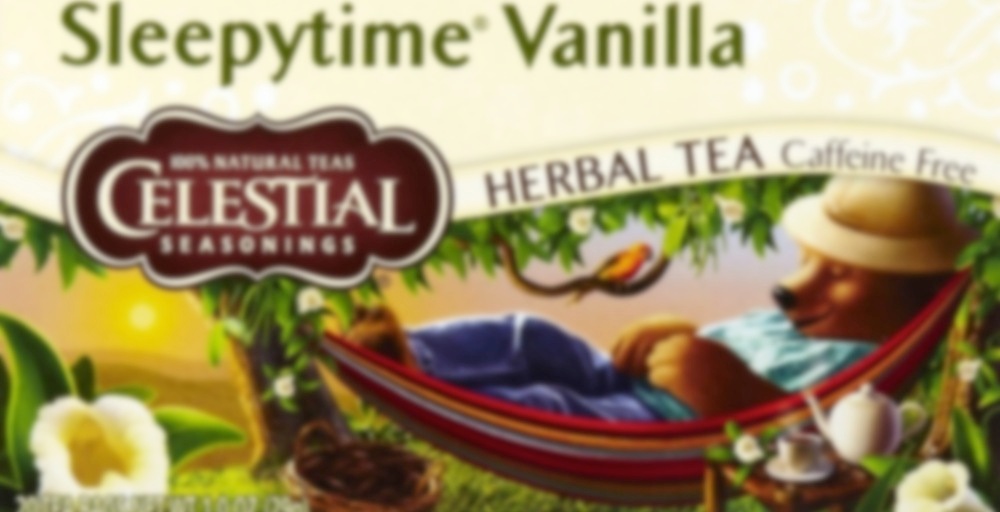 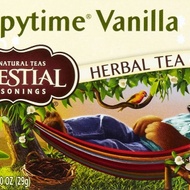 with 85 Ratings Rate this tea Rate This Tea

“Vanilla lovers, rejoice! We’ve added the creamy, nutty flavor of rich vanilla to Sleepytime’s beloved blend of floral chamomile, cool spearmint and lively lemongrass. With its comforting aroma and perfectly balanced flavor, Sleepytime Vanilla is an exquisitely soothing new way for you to wind down your day.”
— Charlie Baden, Celestial Seasonings Blendmaster Since 1975

My last pot of the evening…so glad that my conference is in town this week!! It means I get to sleep in a smidge, and that I didn’t have to abandon Chloe (what, has nobody else named their Breville?), and can have delicious tea before I go to the morning sessions. Granted, I’ll probably not get to have any once I’m there, but at least I’ll have a few really good morning cups!!

You named your Breville LOL! Mine came today woohoo! I will have to think of a name for it :)

Why do I prefer Sleepytime Vanilla in tonight’s side-by-side steep-off? Probably because I was craving vanilla, which is demonstrably present in Sleepytime Vanilla, while rather muted in the Honey Vanilla Chamomile. I need to go check the ingredients of the Harvest Vanilla—ASAP!

I’ve become quite dependant on the Sleepytime Vanilla since MissB furnished me with four boxes of it. I’ll have to see if I can’t get it locally. I’ve got an idea of a place where it might be possible. I think I shall have a gander for that honey vanilla chamomile as well then…

It’s good, Angrboda—much more about chamomile than vanilla, but devoid of mint. I’m going to try them again tonight and see what I think this time!

From http://www.itsallabouttheleaf.com/2378/tea-review-celestial-seasonings-sleepytime-vanilla-3/ – It’s all About the Leaf – go read more reviews!

I have a confession. I consider myself an herbal tea fan. Yet, I hate chamomile.

And a lot of teas, especially ones designed to soothe and relax, like to focus on chamomile. So I used to convince myself (on those nights where I’ve had a horrible long day and want a nice, mellow cup of tea to help me relax) that maybe the chamomile won’t be so bad this time. So I brew, and I relax, and I sip. And then I go and calmly dump the cup out and wonder why it’s still on my shelf of tea. Blech.

This cycle continued until I found Sleepytime Vanilla. This is an herbal tea, designed to relax you. And it has chamomile in it. And I actually like it. The blend of mint and vanilla with the chamomile mellows the flavor, and enhances the brew. As you sip, you’re first hit by the mint and chamomile, pleasantly combined, then the vanilla shows up with a creamy aftertaste. The flavors play off each other, and remove whatever it is that consistently makes me go BLEA.

These days, when I’ve had a horrible long day and want to relax, this tea is the one that finds its way into my cup. I sip contentedly, and actually gain that relaxation I am so craving.

This made me laugh out loud! Hilarious!

Herbal tisane of the evening here, taking care of myself big time includes plenty of rest and relaxation!

You know, I think I like the regular Sleepytime better than this, the vanilla doesn’t do too much aside from providing this with a slightly strange aroma and off flavor. I have to say I am finding it kind of oooky.

Well my history with Sleepytime tea from Celestial Seasonings goes back a long, long way. Back around 1973 I started drinking Sleepytime. I drank it a lot to help sleep (obviously). Back then I didn’t use any sweetener and I got sooooo tired of Sleepytime. I have been really reluctant to try it again. So I found the Vanilla version and tried it. Hey, not bad! I added a little sweetener this time and I like it. I can see this becoming a regular evening beverage. The taste is mostly vanilla and spearmint rather than the heavy camomile I remember. I can’t say its my favorite it it will serve its purpose well.

I was very pleasantly surprised by this version, as the straight Sleepytime now has too much spearmint for my tastes.

Ohhh.. might have to give this one a try when we run out of the regular Sleepytime. My son goes back and forth between Sleepytime and Bigelow’s Sweat Dreams.

Ohhh.. might have to give this one a try when we run out of the regular Sleepytime. My son goes back and forth between Sleepytime and Bigelow’s Sweat Dreams.I’ve been afraid to try it thinking it would change the flavor to something we wouldn’t like at all. It sounds pretty good.

:D Just have to laugh… Don’t take offense… but you wrote Sweat Dreams. It must be the first grade teacher in me! or maybe its for women who wan to see what hot flashes during menopause feels like. Ah, I remember those days. :D

I know what you mean about afraid to try a different flavor of an old standby. There is a peach Sleepytime that I don’t necessarily want to try.

Lol.. Oopsie!! I didn’t proof read my note… Guess that’s what happens when I don’t. I don’t think anyone would want to practice for hot flashes, but hey, who knows these days..?

Lol.. Oopsie!! I didn’t proof read my note… Guess that’s what happens when I don’t. I don’t think anyone would want to practice for hot flashes, but hey, who knows these days..?I don’t think I’d try the peach either. We don’t often like peach “flavor” at my house. My son saw the kids version which I believe is grape and he was intrigued. I’m not so sure about that one either, but the vanilla sounds tame enough & drowning out a bit of the chamomile wouldn’t be a bad thing. We occasionally get coupons for Celestial Seasonings & that might be a good time to try a new flavor… A tiny less invested if we don’t like it.

I’m reviewing this one for Mike the founder of ’It’s All About the Leaf’ tea blog (http://www.itsallabouttheleaf.com/).

I grew up drinking Celestial Seasonings teas and it was (and still is) a staple in my mom’s cupboard; but for some reason I never got around to trying this particular one even though ‘Sleepytime’ is one of the standard CS blends. For once CS seems to have made a herbal tea without hibiscus being involved (thankfully). Out of the box it smells quite herbal with a strong odor of mint. More in-depth sniffing revealed a sweet vanilla-y odor lurking in the background.

There’s not really a whole lot of vanilla that I can taste in the tea itself and I think that’s partially due to the fact that the mint and chamomile are such strong, aromatic herbs that they drown out any subtleties in this tea.

One of the reasons I ended up buying this was because there wasn’t any hibiscus in the blend for once! CS seems to put it in everything (which is one reason why most of their teas don’t appeal to me)! I’m sad to hear the vanilla doesn’t come out much though (I haven’t had a chance to try this yet).

I had a stomach ache tonight and decided some chamomile tea would help. I’m coming around to this cup of tea. The flavor is still a little bit strange, but I like the smoothness. It’s almost “fluffy” — not in texture so much.. but just in presence. I also like how the vanilla calms the spearmint since I wasn’t crazy about that note in the original Sleepytime blend. So soothing, I may have a second cup tonight.

Backlogging. Sunday late at night.
My mom has a box of Sleepytime Vanilla from her many purchases from when she visited the Celestial Seasoning’s plant in Denver, CO while vacationing and visiting my sister Kath’s ex-fiance. This is not the first time I’ve had this herbal at her place. I like it pretty well for a non-caffeinated bagged herbal before bed. Better than plain Sleepytime, if my memory of it is correct. The vanilla mutes the flavors into a better mix.

So many swaps to work on! Yay! Can’t wait share the tea love. :)

Just like Sleepytime but a little more mellow. Nothing special but I do love my cup of “something with chamomile before bed”.

Boiling 6 min, 0 sec
Yours I Like This
6 likes
0 comments
Edit

I think I might like the regular sleepytime better, but this is doing the trick tonight. I don’t buy a lot of boxed grocery store teas (yes, yes, call me a snob), but I like to keep a box of sleepytime tea in the house.