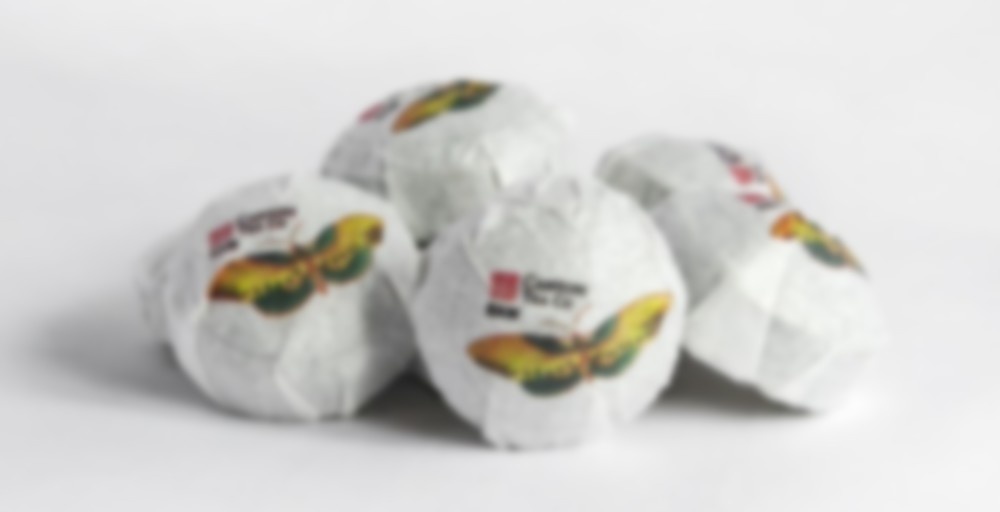 Our specially commissioned raw tuo cha perfect for single servings.
Our own brand mini tuo cha (nests) are made from authentic chopped puerh leaves from Yunnan, not from the fannings or tea dust as most tuo cha are. We tasted many types of maocha (unprocessed leaf) and settled on our favourite, a De Hong leaf from 2012 with a classic raw puerh bright taste. Brew quickly with hot water in a small pot for up to eight infusions.

I haven’t had a mini-tuo for years and don’t think I have ever had a raw one as I generally avoid them as a rule. That being said these were rather cheap and as I have been noticing a fair few mini-tuos and cakes coming from vendors I trust I figured they would be worth a shot, though I didn’t have high hopes before starting the session.

The tuos have a very faint smokey smell to them which upon heating becomes a bit more pronounced. After a rinse the leaves give way to a bit of grain/hay/wood scent as well as the smokey notes that were there initially. The leaf material is fairly chopped which I was expecting.

After 1 rinse I did a quick 5s brew, sadly the tuo is still half intact so I am not getting the full force of the leaves during the first brew. The liquor is light in flavour with a gentle tang and some grassy hay notes. Not much thickness or returning taste sadly. 2nd infusion was similar in flavour profile to the first but with more oomph and a bit more of a bitter bite, though with no discernible sweetness and with only a little returning flavour on the finish. The main point of comparison that I would have so far wouldn’t be other young sheng but instead would be low grade gunpowder greens that I used to drink a lot of. 3rd infusion the bitterness came to the front with less of the hay/grass and a bit of smoke.

The remaining infusions didn’t really bring much new to the tea after this. Sadly not one I would recommend, though due to the sale at Canton it was an interesting purchase that has at least made me appreciate a lot of the other sheng I have! Mostly what was missing for me was any thickness or real body to the tea and any returning flavour/sweetness to balance the bitter. Guess I now need to work out what to do with the other 9 tuos that I have!