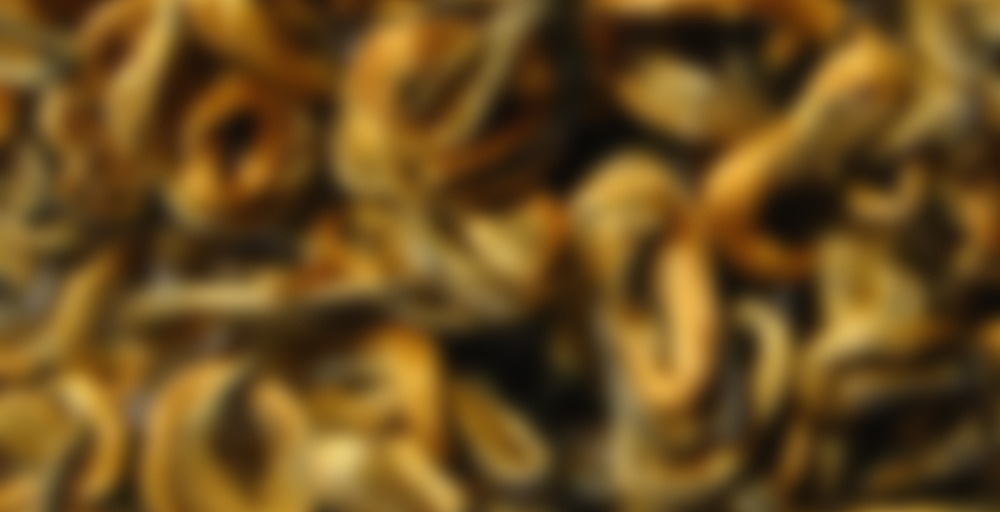 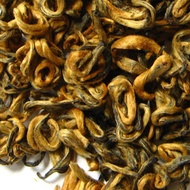 by Camellia Sinensis
83
You

(from the Camellia Sinensis website):
This tea from Hunan Province is grown without chemical fertilizers or pesticides and is made solely from lovely rolled golden-hued buds. The result is a surprising liquor that is both silky and aromatic. Rich aromas of caramel and mild spices harmonize well with subtle vegetable notes (corn, tomato, and artichoke hearts) to create a balanced and particularly admirable vintage.

To celebrate our 5th anniversary married together, I prepared one of my husband’s (and mine) favourite teas: Jin Die.

Drinking from the first steep, I’m greeted with the familiar flavours of Jin Die: deep rich, earthy tea body, cinnamon, spices, tomato (not like SML), the liquor ends on a smooth-velvety feeling. An odd characteristic also makes it’s appearance here, the flavour of ripe puerh. It’s not something I expect from black tea, but I quite like it!

The second steep is much the same with some chocolate and pepper showing up.

As I keep drinking through the steeps, the flavour just keeps intensifying. Fifth steep brought out some caramel flavour, and was our favourite steep.

In each resteep the flavour started to weaken very gradually. I could taste the puerh flavour up until about the 9th, and much of the spice notes stayed up until the 15th.

I ended on the 16th steep because I really couldn’t drink anymore tea. It didn’t even have the taste of my water, just really weak, earthy, fuzzy, slightly sweet tea. The liquor had a yellow-amber colour, which is still pretty dark for so many resteeps I think.

Overall, I have always found Jin Die to be an amazing black tea, but this short steeping experience has heightened my enjoyment of it. As of writing this review, it’s my best black tea resteeper (Ying De Hong Cha from Jing Tea Shop had 14, Yunnan Dian Hong golden tips from Teavivre had 12). My husband isn’t obsessed with tea like I am, and he doesn’t always remember the flavour or names of our teas (especially if they are foreign), but Jin Die has left a powerful impression on him and it quickly became one of our favourites.

Thanks to Dorothy for sending me this Jin Die, I believe my first tea from Camellia Sinesis.

I decided to use my whole sample (about 2 tsp?) in the gaiwan this morning. I love these beautiful hand rolled leaves.

1st steep: 60 seconds. The tea liquor is quite dark, I was surprised. I am picking up lots of interesting flavors here: cinnamon, tobacco, dark chocolate. I’m beginning to wonder if I should have steeped it for slightly less time so…

2nd steep: 30 seconds. Very interesting, I am starting to get some of the tomato-y notes people have described. I think I prefer my black teas to be a bit on the sweeter side if I am going to drink them plain. Perhaps I am weird this morning but it reminds me slightly of an assam.

3rd Steep: 10 seconds. This is my favorite steep so far! I guess this tea was meant to be a very short steeper? I’m picking up on some caramel type notes with a bit of pepper throughout.

Okay, since I’m short on time this morning I think I will resteep this again as a latte – don’t judge me. tee hee!

Thanks for letting me try this one, Dorothy! Very intriguing. I did enjoy it.

Glad you liked it.

I can’t think of anything else in the world that shares its sumptuous hue…except perhaps the vitrinous waters of a brook lined with bright Zisha clay, the vermillion colors slowly swirling over the vibrant roots of river reeds…
Always changing…no brew has been the same. Watching the honeyed coils of buds melt open in the cup, one witnesses the miracle of late winter’s opening unto spring. The taste bespeaks of the manes of wild horses, dark dens made of willow, and all those grateful moments when one welcomes and greets the warming…
A tea of thanks. I brewed this tea for my mother and I as we celebrated her birthday today.

P.S. Like Bi Lo Chun, this tea is saturated with the fluffy “keefy” dust of the hairy tips, but in this case, it is a stunning bright orange powder!

noms. really enjoying this one. Just the right balance of malty and delicious

I am an unapologetic milk-in-my-tea person. Unless it’s NOT a black tea, or if it’s got a fruit flavor, I’m most likely going to add milk to it. I just can’t with this. I don’t want to ruin it. It’s perfect as it is – aromatic, with honey-like notes and an almost fruity finish. This was a generous, not free (but very reasonable!) sample from a tea expo in NY from too long ago, but it’s still lovely, and confirms Camellia Sinensis as a serious, quality tea vendor IMO. It’s a beautiful Chinese black, and I could drink it forever. Even nice as a cold brew using the spent leaves. I would buy more, but will have to hold off as I’ve got the same problem as other tea drinkers – too much tea, not enough time.

I know I’ve had this tea before, but to be honest it wasn’t very memorable in the past. The leaf is gorgeous though, and the steeps that I didn’t forget about and over steep were nice as well. More overt malted honey and bread notes, with jammy red fruit undertones and finishing notes. A little bit too astringent at times, but that was arguably mostly from my lazy & un-timed brewing. The liquor was really rich and thick, with a velvety fullness – even when it was accompanied by harsher astringency. It was a nice tea; though I feel like I’ve got some others from CS in a similar style that I find more impressive…