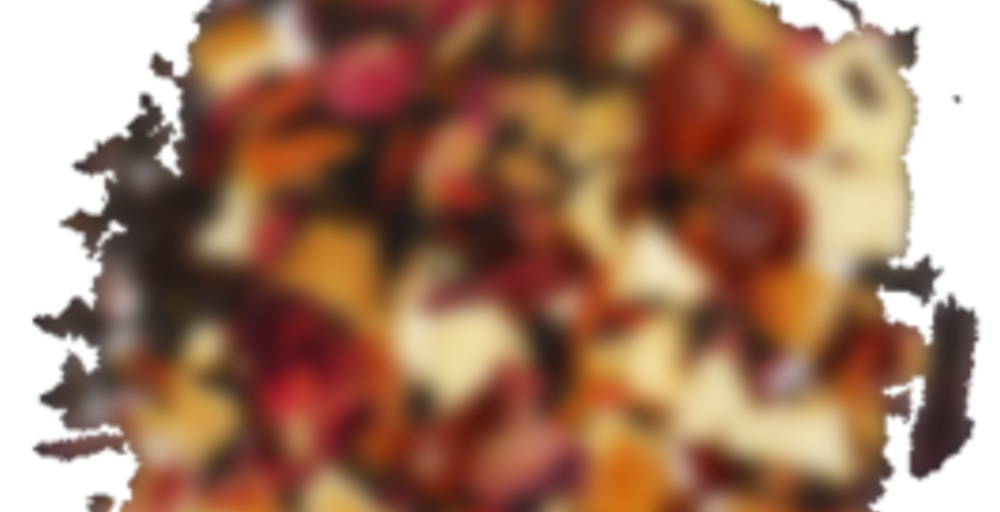 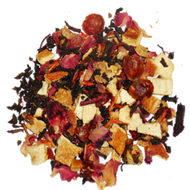 What a great combination of blended fruits to awaken your senses.

Finally trying one of my CaesarsTea samples from VariaTEA! I brought this one with on my vacation knowing I’d likely got short on some teas, and that’d force me to try the samples I’d brought which I’ve been sort of putting off trying at home. That’s been pretty true so far (and I still have five days left here).

I don’t remember why I asked for a sample of this one: maybe because it’s a flavoured black, and I don’t particularly have an orange flavoured black I keep in regular stock. Anyway, the sample I received from VariaTEA certainly doesn’t have as many non-tea bits as the display picture shows, so I don’t know if that’s gonna affect what I taste at all.

Parameters for the mug I’m drinking were: 1 1/2 tsp. of leaf in an 8 oz. mug steeped with boiling water for four minutes – which was the low end of the suggested steep time spectrum. I went with the low end partially because I was worried about this being bitter, and partially because the other teas I was simultaneously steeping had steep times right around that point as well.

Dry this has a very faint orange smell; like orange rinds with an equally faint black tea smell. Steeped, the liquor is a sort of watery brown with some muddled red hues in there and smells like faint, creamy orange. I drank the first half of the mug while catching up on Agents of S.H.I.E.L.D, and honestly wasn’t paying attention to taste – but I happily sipped at it so I suppose that says it wasn’t gag inducing awful.

Eventually I did start paying attention to the taste, and really this isn’t bad though it doesn’t scream “Blood Orange” to me – more so just sweet, regular run of the mill orange. It’s not really that bold in the flavouring, and surprisingly more delicate than I would have imagined, but that could be a result of the low steep time. The orange is light, sweet, and surprisingly creamy and I also get notes of lemon and super faint notes of maybe grapefruit? But a sweeter grapefruit – not a bitter taste. There’s also a sort of floral quality to this, but I’m having a hard time placing what. A few sips reminded me of sweet orange juice, as well. It almost feels like maybe this should have orange pulp in it?

Honestly, it’s a pretty good cup – though nothing exceptional, and not really Blood Orange like titled. I’m surprised at how good and creamy it is, especially after reading Sil’s tasting review in which she characterised this as very tart. I get no tartness at all, nor any astringency/bitterness. Maybe I just hit the sweet spot with the steep time? I have enough for one more cup, so maybe I’ll push for a longer steep time with that one.

Anyway – I’d happily drink this again. But would I want anywhere near 50g more of it? Probably not – it’s not that exceptional.

Thanks VariaTEA! I think this was a good introduction to CaesarsTea.

I am glad it was pleasant enough to drink. I have no idea why I picked this up given I am not usually into orange teas.

Poor Coulson indeed. That was a super intense episode. It was nice to see Ron Glas get a bit more screen time though!

I decided to cold steep this sample from VariaTEA for some reason. Big mistake.

Something about it was just way too floral and soapy. It sort of smelled orangey but not really. It was also somewhat sour because of the rosehips.

Sadly I don’t have any left to try hot, but reading the reviews, I’m not sure I’m missing a whole lot.

I was not much of a fan when it came to this one but typically I don’t like strong citrus flavors. I am sorry your experience with it was not any better :(

sample sipdown! (162) I figured i really needed to get in at least a couple sipdowns today so my goal is 160 so that i can spend the rest of the time drinking new teas and deciding which ones i love the most! haha That will also put me in a good spot to have 1 a day until the end of the month and STILL reach my goal (unless tea shows up from Miss B or terri or dexter…or kallieboo or…yeesh).

This tea smells lovely! it’s blood orange all the way. Drinking it though? WOAH man there is some serious tartness to this. It needs sugar to be drinkable and this reminds me more of grapefruit on the tail end of the sip…while the front end is orange.

Thanks for sharing Cavo! :)

I always get excited about the smell of orange teas and then when I drink them I realize an orange tea is not really my favorite. Unfortunately this is no exception. It is not bad by any means, just not something I would typically reach for.

A sample from VariaTEA. I was expecting this one to be quite sharp, somehow, but it’s not like that at all. It actually reminds me of a couple of orange teas I’ve tried recently; Twinings’ Lady Grey and Mighty Leaf Orange Dulce. It shares the same orange cream, almost sherbet-like, taste. I added a splash of milk to my cup, which I think helped with that a little. It’s not a very natural orange flavour, though; more like kia-ora than fruit. Even so, it’s a pleasant cup. The black base suits the flavouring and stops it from becoming too sweet and cloying. It’s not one I’d want on hand all the time (a good thing, because I don’t think I could get any even if I did…), but it’s a nice treat on a spring evening, and a great dessert tea. Thanks to VariaTEA for giving me the chance to try this one!