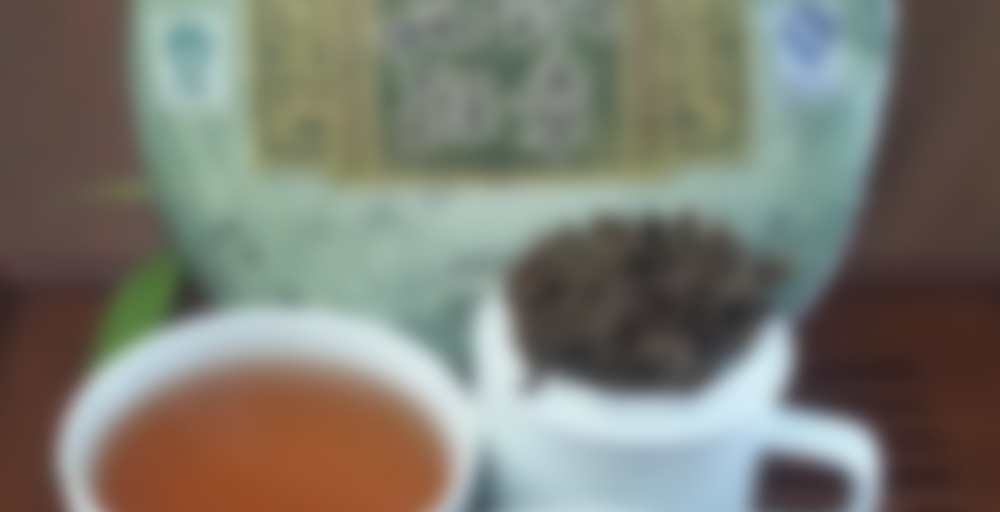 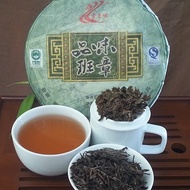 Our 2009 Banchang Tree Puerh originates from uncultivated trees in the Lao Ban Chang region in Yunnan, China. This region is home to the Bu Lang tribe, which has been producing tea since 1476. Thousands of old tea trees including those surpassing 800 years grow in the jungle with other wild plants. This puerh is rare since it is historically famous, high quality, has desirable flavors, is of limited supply, and most of the raw materials are monopolized by one tea factory. Our 2009 Banchang Tree Puerh utilizes the Da Yeh varietal, is Grade AAA, and falls in the Sheng (raw) category of puerh. Apricot notes are dominant and mingle with mushroom, rhubarb, clove, and pepper notes. This tea is earthy and toasty. We highly recommend gongfu brewing for best results.

So it turns out this is the Puerh that I’ve been merrily sipping away at for most of this year!

It’s really very delicious. Full of stone fruit, honeyed flavours that interplay with that lovely, sweet, sheng bitterness/edge. It’s a real delight to drink, producing cup after cup of lovely amber tea, and has gotten me nicely through this rather busy spring!

Do you like sun cha? I have a good few oz left of a 1989 suncha from Butiki. It’s really good but I don’t drink it often. Was thinking I could send you some if you liked it.

You know, I honestly don’t know if I ever tried it :o I’m looking back through my notes and I don’t think I ever reviewed it before. Maybe our second little tea-swap can finally happen – I think I probably still have some other bags of Butiki goodness that I’d be happy to share!

I’m happy to send you some, I think you might really like it (: I’ll drop you a message!

From the Sheng and Shou TTB.

Dry leaf aroma smells of white sugar. The wet leaf aroma also smells sweetly, and has notes of hay and (somewhere in there, lingering at the end, mostly after the first infusion) mint.

The color of the liquor is pretty in a white porcelain cup – green-ish orange, then more orange-y as the session goes on. This sheng is smooth. It begins with a thickness that eventually thins out. Starts off as clear, then a lot fuzzies from leaf float around in the Pyrex cup, starting with the fourth infusion. There are consistent flavors that pop out all at once: dry hay, green peppers, fruit (especially apricot, noted by Stacy from Butiki), and musk. Sluggish qi. Made me feel tired-tipsy.

I appreciated it, but I didn’t get an “aw yissssss”. I’m getting so much better at tasting sheng though.

Did you stock up? :P

I had a lovely gongfu session with this tea this afternoon. I did not take detailed notes but man this one is great! So apricotty and tangy and delicious. Shengadelic!

Yes it’s a good one!

I definitely need to incorporate ‘shengadelic’ into my vocab. :D

Sounds great. I am looking forward to the notes.

Working this one up tonight. Measured 7 grams out to brew. Dry leaf has a musky aroma to it and leaves look nice and whole. Not broken and torn as in many blends. Wet leaf has a touch of citrus on the aroma similar to a Meyer lemon.
First steep 5, 5 and 5 combined to a larger cup. Tea brew is very clean and clear. No cloudiness at all in after going through the strainer.
A little touch of smoke so light in the background that passes to a slight wood and slight bitter that turns into a nice kind of bitter that turns into a semi-ripe apricot type of finish.
it gives a bit of the tip of the tongue “buzz” for 10 to 15 seconds after you sip it.
A warm fruity and musky aroma comes off the cup if you bury your nose in it as I do. I like to savor these things very slow and the experience that comes with it.
Solid sheng and easy to drink without lots of bitterness that come with some of these teas. A bit of Kuwei or slight bitterness comes and goes to a nice sweet finish on this one.
Solid and Solid tea.
I would love to try this 5 years from now to see the development on it. …Someone remind me at that time.
Gong Fu method.

YUM Thanks for reminding me of this one. I need to drink it again!

Mrmopar, do you generally buy whole cakes or samples?

I bought mostly cakes and now I kind of split it up between cakes and samples. If I put another fridge in to act as a “Pumidor” I will be in trouble. I have one large one and 2 smaller dorm sized ones. I have to make room for the inbound so lately just samples but the Yunnan Sourcing shopping cart is pretty full now.

Yeah I am in the same boat with the shopping cart but I only have maybe 7 cakes.

Soon… I need to retry this one soon.

I had this early today to wake myself up. I’ve got work to do as well as some “fun” organising some tea swaps. We also have a bunch of work to do to get a list going of all the things we need to do if we’re really going to move to another apartment within the complex we’re living in right now.

This was a sample from Stacy, and i have to be honest, i’m not yet sure how i feel about it. I was initially getting a bit of a bitter note that i didn’t like, but then with a longer steep there was much more pleasant smokiness and a bit of spiciness to it. Overall, i think i may need to order this one later to really play with it :)

I have a bit of this too, but haven’t gotten to it yet.

I cannot wait to get my hands on this tea.

I’m taking a short break since today is a long day and I will be working very late tonight in order to compensate for taking a shorter day tomorrow. I decided to gongfu brew some of the Banchang in a 50ml gaiwan. This time around I used a lot of leaf. I think, I prefer less leaf for this one. With less leaves, the apricot notes are very strong but here they are much lighter though still present. The spice notes are stronger now and more upfront. I’m getting a lot of clove, pepper, and cinnamon and some anise but also a nice creaminess and fuller body. Actually, I’m starting to love this despite missing the stronger apricot notes. Very delicious. The rhubarb is now making its way through a little bit. This is definitely my favorite Sheng! Shhh, don’t tell the Wild Purple Buds.

For the rest of work, I’m doing a Joy Division marathon. Unknown Pleasures followed by Closer, and finally Still. As the days are getting warmer, I’m just in more of an old school goth, industrial, and jazz mood. Just came out of a hip hop/rap mood which lasted through the harshest days of winter. Anyone else noticing their preferences shifting as it gets warmer? Here is Joy Division’s A Means to an End because it is awesome: https://www.youtube.com/watch?v=6oMFMRv5c3o. If I make it through all 3 albums then Sun Ra or Peter Brotzmann will be playing, which I can only listen to at work or with headphones.

Also, have to share this. I just funded this Kickstarter: https://www.kickstarter.com/projects/159974695/calamityware-dinner-plate-3. This artist takes the classic Blue Willow pattern and adds ‘calamities’. Super awesome. Can’t wait to serve my guests food on this plate and see if they notice.

Those plates are fantastic!!!

Nicole-So excited about those plates! :)

I’m not just loving this for the plates and the tea, but for the Joy Division marathon! There just isn’t enough Joy Division out there.

This tea is super exciting. I’ve been enjoying more mellow music this spring :)

So tempting, but $30 shipping to Canada. Wow!

Stephanie-So glad you are excited for this tea! Mellow music is great for spring. :)

OMGsrsly-For a second I got confused and thought you were talking about the tea. Hahaha. $30 shipping to Canada for a plate is pretty insane.

The plates are beautiful and so much fun, loving the bats!

Aww, You made me put on my old Joy Division reccords this morning, listening to Transmission right now, sipping on Premium Taiwanese Assam. yummy!

I get music mood shifts as well with the seasons. This is what I’ve been into lately, can’t wait to listen by the pool!

I, too, turned on the Joy Division this morning. It’s still going. (I’ve got every Joy Division track on Google Play in my queue right now.)

OMGsrsly-When the shipping is more than the plate that just seems out of whack.

Cheri-Awesome! For me Joy Division is one of those bands that I end up listening to nonstop until I get sick of. :)

Glad you liked her Stacy, she’s the daughter of Sex Pistols drummer Paul Cook, I think she’s amazing, the whole album has that breezy vibe…

Interesting! I’m going to have to check out the rest of that album. :)

OMGsrsly, the artists FAQ explains how to get around the international shipping to Canada:

Yikes! What if I live in Canada?

I once lived and worked in Toronto. So I want to help out my friends north of the border. If you live in Canada, shipping will be included in your pledge.

But you need to pledge in a special way. Here’s what I want you to do. When you make your pledge, pretend that you live in Pittsburgh. (It’s nicer than you think.) Don’t ask for international shipping. Don’t pledge the extra $30USD to ship overseas.

Later, when I ask you for your current mailing address, you’ll tell me that you live in Saskatoon, or whatever. We’ll need to trick the system once more by pretending that Saskatewan (or whatever province) is in the USA. I’ll change the mailing labels from US to Canada and you will have saved $30. That seems to work.

Ha! I didn’t even go there. I see the “additional shipping” and click the X. :) Thanks, beelicious!