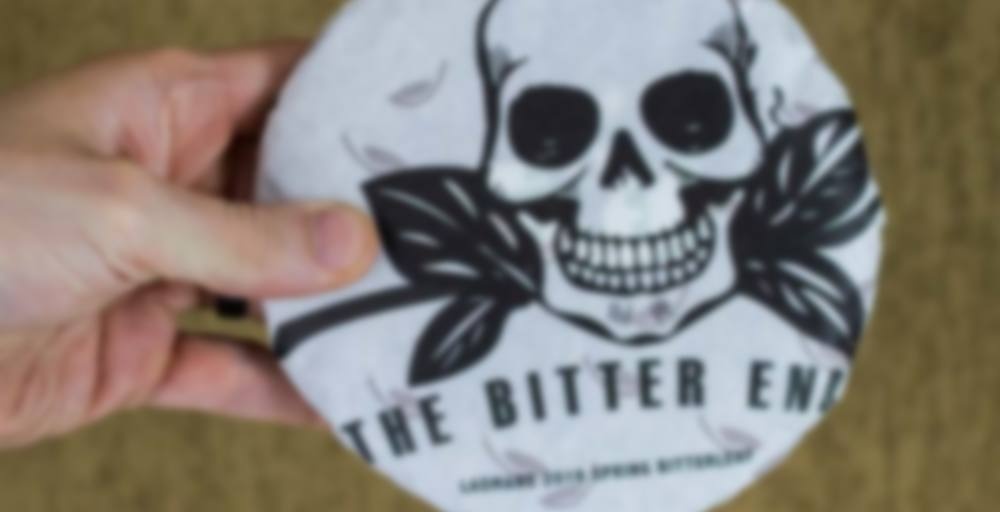 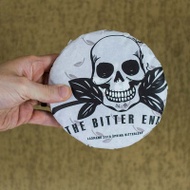 Despite the name, this Lao Man E raw puer is actually made from what’s considered “sweet” varietal arbour material. Compared to a gentler Yiwu, a fragrant Jingmai or a sweet Lincang, this Bulang region tea has a prominent “kuwei”, or bitter flavour up front. However, a pleasant sweetness and excellent huigan quickly follow and linger in the mouth and throat.

The village of Lao Man E is located not too far down the road from Laobanzhang, which tends to see it often passed off as genuine Laobanzhang due to an overlapping flavour profile and character – at a fraction of the price, of course.

This tea is one of our favourite finds of 2018, as it represents a slight departure from some of our usual finds. If you are new to puer and/or easily scared off by bitterness in tea, then we advise picking up a tea from a more welcoming region, like Yiwu. If you’re looking for a tea that’s highly enjoyable with a bit of bite, then look no further.

Alternatively, our Lao Man E huangpian is another good option for those who want to dial the bitterness back slightly, yet still want the Lao Man E experience.

Want to bring on the bitter? Then our Xtra Bitter End is for you. Made from “bitter varietal” ancient tree material, experience the tea equivalent of getting punched in the mouth (hurts so good).

I figured this might tasting a bit less bitter to me if prepared Western style, and just slightly under leafed – and the logic was that if it was less bitter it would then also be more enjoyable. Despite forgetting I was steeping it and leaving it for a solid nine or ten minutes to steep, I actually liked it a lot more than expected. It was still a little grating-ly bitter initially and I found myself experiencing a good deal of scratchy-tongue astringency. However, it also rewards you with lingering sweetness on the tongue after the initial bitterness, and after a third or so of the mug I had acclimated to the bitterness and no longer found it all that bad. It was actually enjoyable, even.

So I guess I’m finishing this one off Western style?

This one was my personal favorite of the Bitterleaf Teas’ Lao Man Es.

It is bitter like kale cabbage, but has a wonderful floral aftertaste and essence of stone fruit. It is likely too bitter for the uninitiated into bitter shengs, but is my choice as the Bitter End Lite brick lacks the aftertaste, and Xtra Bitter End is like drinking aspirin.

I’ve been an advocate of bitter sheng ever since trying Hai Lang Hao’s 2016 Lao Man’e. Ever since I’ve been on the hunt for a Lao Man’e that could deliver most of the things I love about that tea, while being more friendly on the wallet. Bitterleaf has not just one, but three teas out from this village this spring, of which this is the “sweet” varietal.

I used 8.7 grams in a 130ml gaiwan. If there’s one thing I can say about Bitterleaf’s teas this spring, it’s that the leaf integrity is impeccable. Based on the samples I’ve received, the compression seems on the very loose end, and looking at the brewed leaves of various samples at the end of the session, virtually all of the leaves are intact and typically still part of a set of leaves picked together. This tea was no exception. I gave the leaves a brief five second rinse, followed by a five minute rest. Upon tasting the wash, it had strength, albeit it was still a bit watery in terms of taste.

I did a total of twelve infusions, the timing for these being 5s, 5s, 7s, 10s, 15s, 25s, 40s, 75s, 2 min., 3 min., 4 min. and 5 min. The tea started off slightly sweet and fruity, but more noteworthy was the juicy, wet, lubricating mouthfeel and its refreshing and palate-cleansing quality. This juicy, hydrating quality was something that was quite consistent throughout the session. The second steep was bolder as one would expect. Since I’m familiar with this region’s teas, I could pick up on the bitterness that was slowly building in the background, but normally I probably wouldn’t have even known it was bitterness. In addition to being juicy, lubricating, fresh and refreshing, the tea had an active mouthfeel.

For me this very characteristic grapefruit note is one of the trademarks of a Lao Man’e, and in the third steep it appeared in a very subtle way, which served this tea well. There wasn’t all that much sweetness, which further supported what the tea was going for. The result was something that was very refreshing, cleansing and enjoyable to drink. The mouthfeel improved in the fourth steep. The flavors continued being subtle, which I appreciated as I did not interpret them as being weak. There was now what some might view as slight bitterness, although to me it felt more like a sour grapefruit flavor.

The bitterness did keep growing in the next infusion, although it was still very restrained. It kept you wanting more. In many ways the tea was like a better version of most green teas. I don’t know if it was the tea, but I found myself spacing out a little while brewing the next infusion and as a result ended up pushing it a bit more than I’d intended. As one would expect, I was rewarded with more body, an oily mouthfeel, bolder flavors and just more of everything. There was more clear bitterness now. The tea was also very active in the mouth and the cha qi was much more pronounced now. The tea had a nice calming effect and I really enjoyed this steep.

I found the flavors to sort of fall more in the background in the seventh steep while the cha qi came even more forward. I really like the qi in this tea. While less of a focus, the flavors were nice though. They were a mixture of bitter, astringent, sour, warm, comforting and so forth. The bitterness finally took over in the steep that followed. This was now much more along the lines of how bitter young raws that have it typically get. I felt like I was also getting a bit of a roasted coffee note, but besides that there wasn’t much else going on.

From this point on the tea became rather simple. It started becoming increasingly sweet while exhibiting some initial harshness as well from time to time on the first few sips before dissipating. The strength stayed fairly strong actually and I was still enjoying the tea. It’s possible that the leaves could have carried on for a steep or two after the twelfth infusion, but I was starting to get the sense that the tea was on its last legs now, so I decided to call it there.

Don’t be too intimidated by the name of this tea. I may have different standards when it comes to bitterness than other people, but I didn’t find this tea any more bitter than your average young pu’er that does have some bitterness. If anything, I found The Bitter End more sweet than bitter. I would actually go as far as to say that this is one of the easiest to drink young raw pu’ers that I’ve had. The tea is very juicy, refreshing and hydrating, and as long as you can dig the small bite from the grapefruit and don’t mind the small bitterness, I think you’ll have a good time. This tea is perfect for summer and I see no reason why not to just drink it now.

All that being said, what I’m seeking is bitterness. Wonderful kick-you-in-the-face bitterness that leaves your mouth numb and makes your face contort all the while you keep reaching for more in euphoric bliss. For me this tea didn’t come even close to what I’m looking for, but that’s why Bitterleaf is offering The Bitter End Xtra, made from the bitter varietal growing in Lao Man’e. I’m hoping it will deliver. They are also offering a huang pian version of this tea, which should serve as a good budget alternative for daily drinking. Reviews of both are coming, as soon as I get around to drinking them.