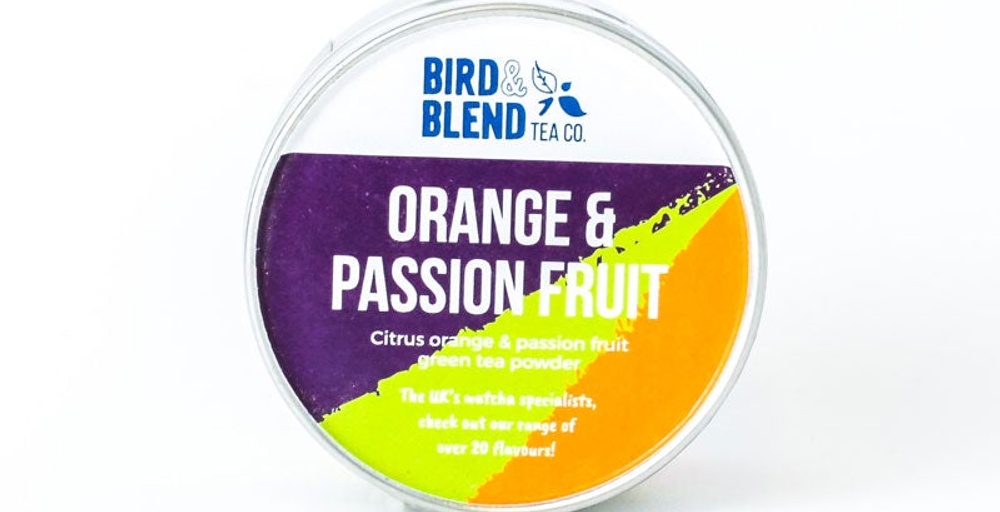 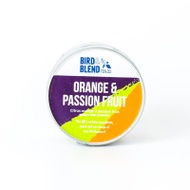 This smells totally accurate, and the flavor is pretty close too! The orange is nice and tangy, like orange peel. The passion fruit is pretty distinct and nice. I also taste a strong celery, which isn’t the best, but I can get over it. The matcha flavor is there too, and it’s pleasant. I enjoyed this with lots of milk and some whipped cream. That celery flavor really is lingering in my mouth long after the cup is over though.

Prepared this one cold brewed with lemonade today, and in the process realized it wasn’t in my tea spreadsheet or my Steepster cupboard. Sigh…

Anyway, it’s lovely with the lemonade, adds a nice punch of zingy-sweet passion fruit flavor. I will say overall, the drink is a bit too sweet and intense for me though, so I think next time I’ll experiment with half lemonade and half sparkling water to make a lighter sparkling matcha lemonade. I’ve been drinking a lot of flavored matcha in oat milk lately, but I didn’t really like that preparation with this flavor so am trying other methods. :)

Smoothie matcha for this morning. Since I am still working with coconut milk and it changed the flavor of my last matcha so drastically, I tried whisking up a small portion in water (not my preferred method for matcha!) for flavor sampling purposes. I found it didn’t produce much froth, but at least integrated nicely without a weird texture in the mouth. The dark olive-green liquour had a very umami/seaweedy taste to the matcha itself, rather than sweeter grass, but it was prominent and not covered completely by the flavoring. Of the flavoring, I pretty much just tasted the citusy orange note; it was a bit pithy and orange peel like, and I couldn’t taste the passionfruit well, mainly just a sort of “tropical fruit punch” taste that came as an aftertaste after the sip.

Oddly enough, when it was added to the blender with the coconut milk, yogurt, and some strawberries and mangoes and blended up, I am getting a strong presense of the passionfruit flavor from the blended smoothie! It’s a tropical, slightly bitey flavor, which would almost be “sour” if it weren’t for the sweetness of the smoothie itself softening the edges so it works. Some sips, the citrus orange really pops, but mostly I think the citrus is adding to the passionfruit taste.

This works fine in a fruit smoothie, but I’m not sure how I feel about it otherwise… it actually might be one that I would like okay in a coconut milk latte, since that sweet milk seems to compliment these flavors okay and take a little of the edge off. But outside of creating a “tropical” smoothie taste? I think I prefer B&B’s Orange Matcha, which works nicely in smoothies but also is good in a latte with vanilla to create a “creamsicle” effect. The flavors aren’t that much different and I think the Orange one is a little more versatile… especially since taken plain in water, I wasn’t getting the passionfruit flavor to really pop much.

So I really want to like this one because its got a bright citrus and passion fruit flavor. Like really, really refreshing and juicy. However, since this flavor seemed wrong for a matcha milk, I made it in water which creates two issues: (1) I feel the texture of the matcha a bit more than usual, which is not chalky as some can be, but still a little chalky perhaps and (2), I get that grassy/umami flavor that matcha should have but is usually covered up by the milk. I don’t like matcha which is why I drink flavored matchas as matcha milk. So while I know this is great flavorwise and could be awesome for someone who even remotely like the taste of matcha, for me, it is not the best. I wonder if making it hot would be better though…

ETA: I just saw Roswell Strange described this as “Five Alive” and she hit the nail on the head there…just with a hint of matcha.

It would probably be pretty killer iced with some lemonade.

Probably but I have no lemonade. We shall see if I remember to grab some sometime. Also, the powdery quality could be because I just mixed it in cold water instead of using warm water and icing or topping it with cold.

Paired this with a raspberry scone with home-made passionfruit orange marmalade. It’s delicious, and this duo of sweet citrus and tropical flavours is cheerful enough to chase away the fog from this dreary, drizzly rain filled day!