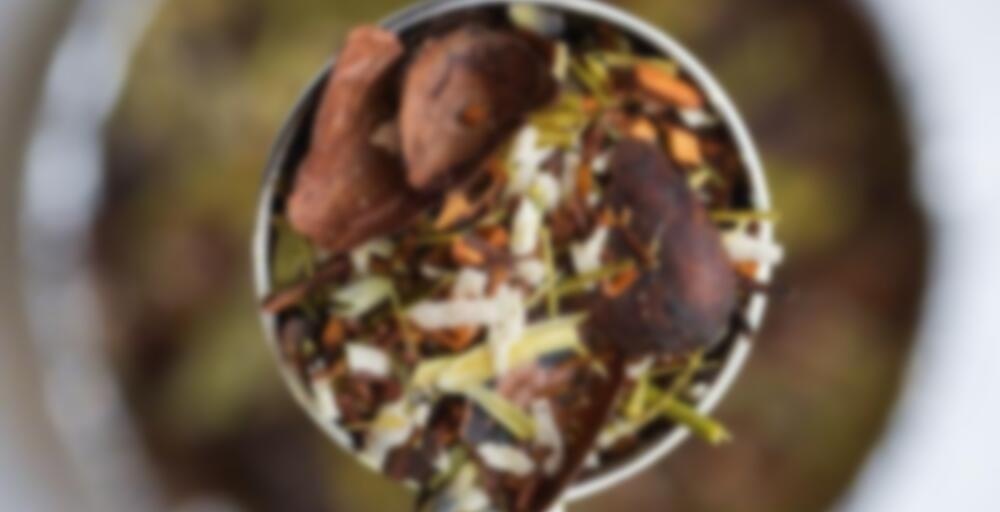 Dozy Girl has met her match! We thought it was time to add some balance to our tea shelf… Like Dozy Girl, this blend is fantastic for sleeping – infused with calming lavender and a most pleasant compliment of cocoa + coconut. Lazy Boy is a blend that everyone can share + love!

This one has really grown on me. It’s exactly what it says it is and I enjoy all the ingredients. The lavender is pretty forefront, but the chocolate and coconut it mellow it out in a nice balance.

Thanks to tea-sipper for letting me try this one! This tea totally reminds me of Teavana’s lavender creme flavor! Very sweet and desserty. You get a nice lavender flavor supported by the other ingredients. B&B’s rooibos is great, as always. I’m almost regretting not grabbing some of this during the sale.

Yeah, B&B better still have this around when I want to stock up again. :D

Additional notes: Bring this one back, B&B!!! Lovely cocoa shells, coconut, lavender. It’s perfect. I dread the day I run out…

Edited to add: I just asked B&B if Moondrop Dreams and Lazy Boy are included in the permanent collection and they said YES. So that’s good news anyway.

It’s available on main website as I am checking it now. If you like this one, I think Moondrop Dreams could work for you as well.

WHAT? Oh cool. They must have snuck Lazy Boy onto their site. And I also love Moondrop Dreams so it’s nice to see both on their site! I hope they are both in the permanent collection.

I placed an order, I wanted to grab some more Moondrop Dreams – but I forgot :/

This stuff is pretty much THE REASON I had to cave at the last Free International Shipping sale. I am CRAZY over Lazy Boy.

This is one of mine, and one I tend to hide in the back of the cupboard, telling myself, “It’s too good to drink it too often!” …Which is silly (especially for a coconut tea!) and something I’ve tried to be better about. I have actually pulled this out a few times this last week, as I just love this flavor combination of sweet coconut, rich cocoa shells, and a lovely kissing of floral lavender. I’m a fan of lavender with chocolate and lavender with coconut, so these flavors just work perfectly for me. I also love the nutty/caramelly rooibos base which allows me to enjoy this decadent tea right before bed. It’s definitely a comfort, and right when I need it (my kitty goes in for some oral surgery tomorrow, and I’m an overly worried fur parent).

Lazy Boy is a good choice for mental health tea for me too. Luckily it’s a blend B&B has in stock all the time (at least for now). How did your kitty buddy do?

She didn’t eat for a few days, but once she started eating again and I could give her pain meds through treats, she really started to bounce back. Other than being a little low energy in regards to play time, she’s pretty much back to herself. :-)

This is the first of the Dreamtime Collection teas I’ve tried (except Dozy Girl, which is part of the standard Bluebird line-up, so I’m not really counting that one.) I like the idea of coconut and cocoa, but lavender has me feeling a little wary. I made this one up as a latte with coconut milk, as per Bluebird’s recommendation and, surprisingly, it’s pretty good. Not my favourite, but good.

Obviously the coconut milk has significantly amplified the coconut flavour here, and it’s also added a creaminess that would otherwise be lacking. The lavender is the second strongest flavour, and is still fairly pungently floral, but not obnoxiously so. The cocoa comes in last; really just a hint of chocolate towards the end of the sip.

I’m happy with how the cocoa and coconut work together – that’s a tried and tested combination. I’m not over sold on the lavender – it’s a little jarring, and it feels like it doesn’t really quite fit in here. As a combination, especially with the milk, it’s a touch rich and cloying – quite difficult to drink in latte quantities (which for me means 500ml plus.) A smaller cup would definitely suffice for me.

On the whole, though, it’s not too bad. I like the coconut/coconut milk, and I got a good night’s sleep so perhaps it helped some. It has a rooibos base, but I wouldn’t have known with it made up this way – it could have been herbal, or even black…there was no taste to give it away. Where rooibos is concerned, that’s probably a good thing.

I doubt I’d buy more of this one, just because lavender isn’t really my thing and I don’t think it works particularly well with coconut and cocoa. Glad to have tried it, though, because you never know!