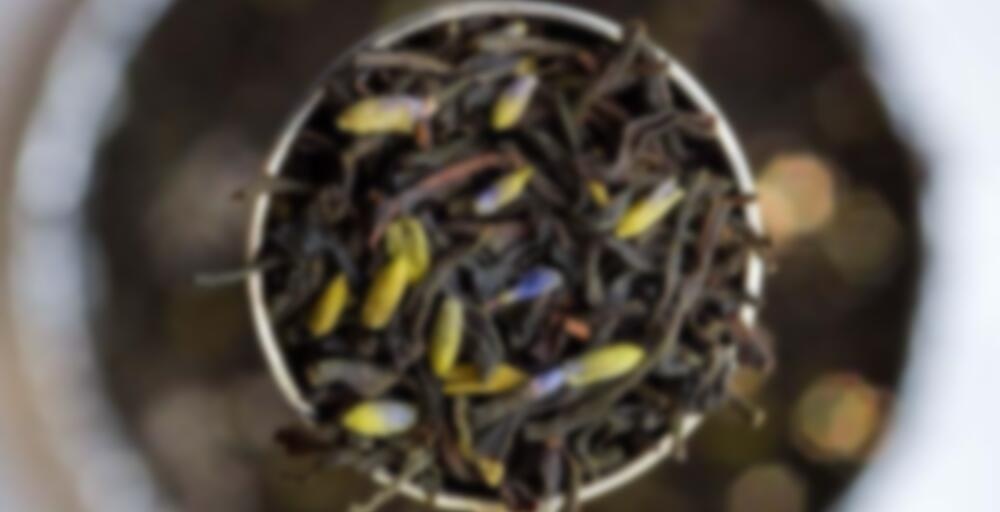 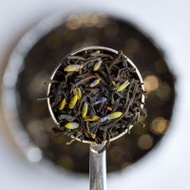 Behind all great men there is always an even greater woman and there was no exception with the Grey family. Whilst the Earl was gallivanting around the House of Lords, good old Mrs Grey raised his sixteen children! We reckon she is well overdue a relaxing loose leaf tea break with her very own blend of parma violet lavender black tea.

I had to sample this one. Thanks, bluebirdteaco.com! Earl Grey and lavender! I’m trying to adjust to Bluebird’s black tea base. It doesn’t have a strong flavor, but their blends have such nice ingredients that it would be terrible to have a stronger black base to mask those flavors. After a three minute steep with just boiled water, I didn’t taste much earl grey, but there was a ton of lavender flavor even though I didn’t see much in the blend (they floated!). The lavender is delicious and it may have just blended really well with the earl grey. The second steep at four minutes had more earl grey and less lavender, which was a fun switch. I really like this one! It is simple and elegant!

Made this Friday night, another sample from one of the cutest tea companies out there, Bluebird Tea Co. Thanks guys!

I love the smell of lavender. I probably have an 85 yr old lady living inside me telling me to buy everything lavender scented. Hand cream, lip balm, perfume…last summer I planted my very first garden which included two lavender plants. Exciting, but I still haven’t figured out what to do with them, haha. This year I might try them in my dehydrator and play around.

Anyway, I love earl grey teas, and given my obsession with lavender I thought it was worth a try.
You know how some things smell better than they taste? Lavender smells like heaven but not surprisingly I’m pretty sure it kind of tastes like a plant, haha. I didn’t like it enough to have two steeps, but I am glad I tried it. I had it at night so maybe it helped to relax me. Who knows.

The third and final sample from my second Bluebird order. I’ve only had lavender earl grey once before in my life, and I wasn’t over struck. To be honest, though, it wasn’t a great brand, so my expectations for this one are much higher. It’s a pretty simple tea for Bluebird – the dry mix is composed only of black tea leaves and pieces of dried lavender. It smells, as you might expect, predominantly of lavender, with maybe a very slight hint of bergamot. Brewed, the scent is much the same.

To taste, this is very…lavendery. Teas like this usually make me think of potpourri, and that’s not something I’d ever want to drink. I just don’t know about the combination of bergamot and lavender, either. It’s a little odd. I think I usually end up feeling like this because I like earl grey quite a lot, and I’m not over keen on having it messed about with. On the other hand, I don’t like lavender at all, other than to smell or as a plant in the garden, so I guess I’m biased as well. I’m sure if you like the combination, this would come across as a great tea. It’s quite subtle, the flavours are well balanced, and the black tea base slightly malty and supports the flavours well. It’s not at all astringent, so it’s easy to drink without milk as well. To me, though, there’s something about that taste that’s just a little…off. I know it’s only because the flavour combination just isn’t one that appeals to me, though, so this is by no means a bad tea. Some you win, some you lose, and I’m afraid lavender is always going to lose with me.

Well, I oversteeped this one and it was strong. Like, too strong to drink straight. Lots of lavender flavour, less bergamot, and lots of black base. I am looking forward to brewing it properly next time.

The one thing I do wish I got here, though, was some creaminess. I’m hoping that a shorter infusion will fix this, but it’s a little harsh to me. I might try a mix with DT’s Vanilla Orchid, as it feels like a good combo, or maybe adding a drop or two of vanilla plus some milk? (I used whipping cream yesterday and that was too creamy).

Holding off on rating until I’ve tried it again. It’s kind of middle-of-the-road at this point.