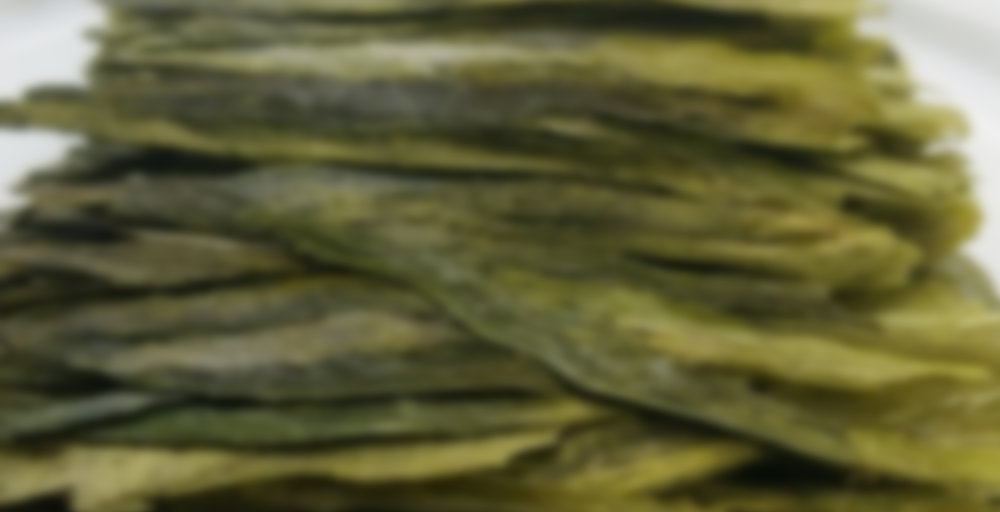 by Beautiful Taiwan Tea Company
75
You

New Offering: 10/03/2018
There are several interesting things about this tea… Number one the leaves are pressed flatly to the point of being almost paper thin! I really like watching the leaves soften up in the translucent hot water as it gradually takes on the color of a nice green tea.

Also, it’s made with a rare tea plant cultivar named Shi Da Cha which is only grown in Anhui province – a huge leaf by comparison but somehow pulls off a nice delicate taste I really like.

Another point is that almost all of this tea is grown on the opposite side of the mountain shielded from the rays of the sun making this a naturally shaded tea something like a premium matcha that is purposefully shaded.

This is one of the few teas we carry that is not Face to Farmer™ but it’s so unique and interesting I would like to offer it to our customers via a long-time friend of mine close to this source.

Brewing: This tea is an uncommon shape so don’t brew it in a gongfu teapot, put it in a tall glass and drink it grampa style. Boiling water is ok with this one and let it sit for a few minutes. Try 3gr to a cup and go from there.

Received as a free sample with my order, thank you! Not listed on their website as of this review.

First time with this style of green tea so I wasn’t really sure what an appropriate leaf amount was but 2.5g per cup turned out to be pretty good.

Awesome shades of bright green, flat-pressed leaves that released an effervescence when I poured water into the glass. Whiff of sulfur. Let it brew for a few minutes. Aroma was light, with mostly nectarine and some vegetal like sweetgrass and green bean. Taste was nice and fruity, with yellow and white nectarine, passionfruit, sweetgrass and green bean. Slightly drying. A pleasant surprise of non-cloying coconut was sitting near the bottom of the cup.

With the first refill, some of the less-than-paper-thin leaves began to disintegrate. Drying mouthfeel increased greatly and the flavors remained consistent but lighter. What leaves ended up in my mouth were edible and not bitter. After the first refill, I’d say this tea was done.

I wish I had more so I could try it cold-brew but my boyfriend wanted in on this sample, too. I’d also like to try it with lower temperature water.

Overall, I’m glad to have tried this type of tea for the first time and will probably seek it out in the future. I enjoyed the fruitiness and refreshing quality. I think having a small snack of fresh mango would complement this really well and detract from the drying mouthfeel.

Refraining from a rating since it’s not available on BTTC’s website as of this review.