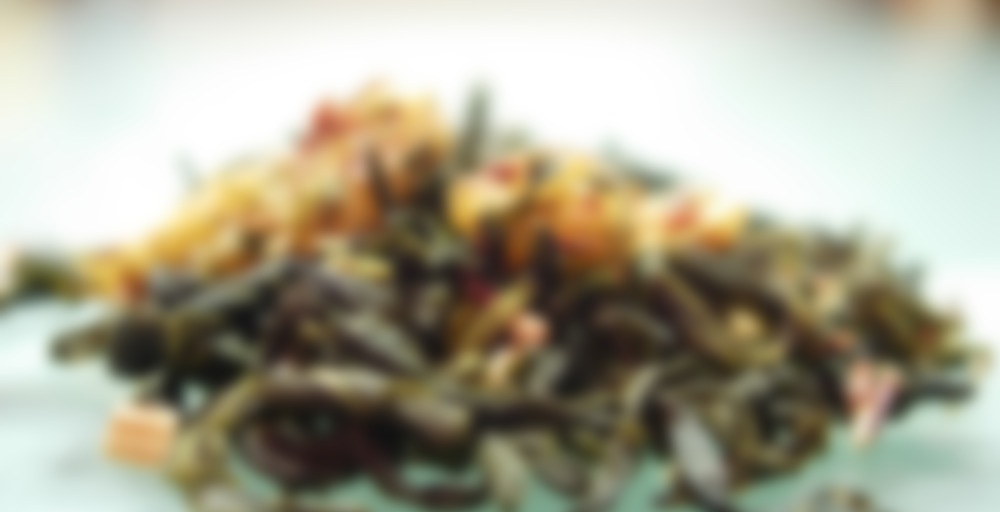 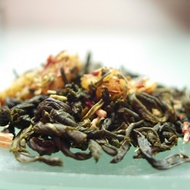 This is what springtime tastes like! Succulent, juicy essence of pear blended with fragrant and fresh organic sencha, organic pan fried greens, marigolds, and apple bits. Renew your senses from the inside out with this sweet, crisp, blossomy infusion.

Actually had this prepared for me as an iced tea by Art of Tea at their office in Los Angeles. As is with ice, it was surprisingly sweet. No added sugar needed.

Delicious both hot and iced.

Pear seems like a tricky flavor. I’ve had pear teas and while they’re always tasty, they don’t always taste like pear.

If the dry leaf was any indication, though, that wasn’t going to be a problem here. The tea in the tin smells like the juicy run off from canned pears, without the sugar.

Steeped, the aroma is less intense and greener — the tea base comes out a bit more. But there’s still more than a definite hint of pear in the aroma. The tea is an intense gold color and remarkably clear.

It’s in the flavor, though, that this really shines. Though I have to focus my mind a bit on the warm pear desserts I’ve had in the past to get past the initial jarring effect of hot pear, that’s what this is. Hot pear, not sugary, with a grassy green sencha coming through mostly around the edges. It’s amazingly true to flavor, without any artificiality.

I dub this my official top pear tea so far.

I just realized I have never had a canned pear. In fact, I am not sure I ever registered that they were sold in cans, but now that I think about, my mother-in-law used them for a pear salad she made at Christmas but I never ate it. I think she put mayo on it and topped it with cheddar cheese. It’s a southern thing?

pear and mayo and cheddar sounds revolting, but that might be my northern sensibilities talking.

My parents were raised in the depression and they always had canned fruit (and other canned goods) because they were very cheap, and they lasted essentially forever. So you could stock up during sales. :-) I switched to frozen vegetables when I got older and had my own house to avoid the sodium, but I still can’t really keep fresh vegetables in the house. I don’t get around to making them in time and they spoil.