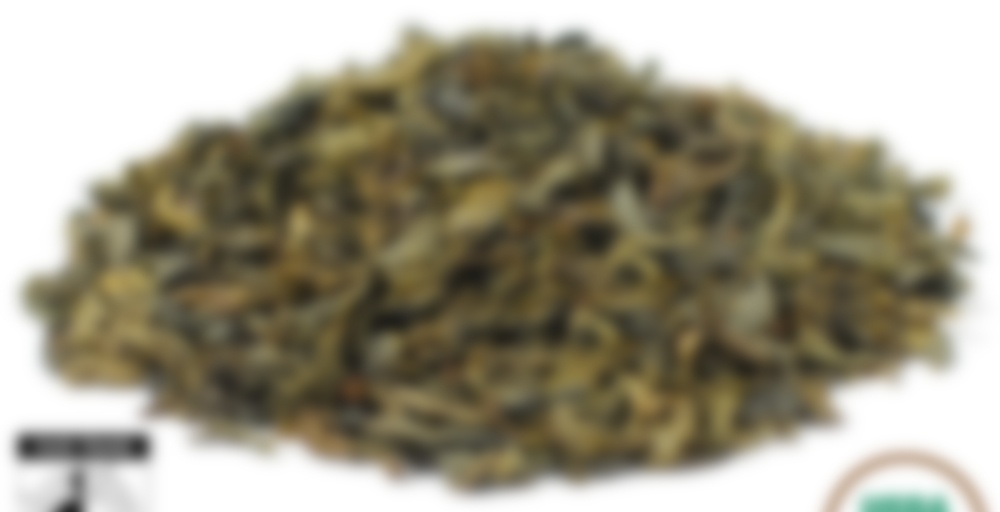 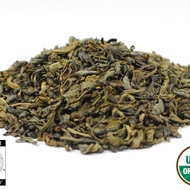 Also known as Mist and Cloud tea, this tea is harvested in an altitude smothered in clouds, which rarely sees beyond the surface mist. One can only image the characteristics this must play on the growers cultivating in this mystical environment. We like to think that this climate plays a role in the unique characteristics transferred in each steeping of our organic fair trade yun wu. Aside from the relationship we have with sourcing this tea, we selected this green tea because of its light pleasant flavor with a slight sweetness in the finish. It brews a light golden jade colored infusion.

Backlogging, and based partly on memory.

Date of Purchase/Amount of Leaf/Date of Steeping: Bought eight ounces of this tea in late 2011 during their Black Friday sale in 2011. I steeped this tea a few times since I bought it (once today: 6/11/2012).

Flavor of tea liquor: Somewhat vegetal, strongly smoky, and astringent tasting after the second steeping (and some on the first if not brewed properly); it’s like any Chun Mee I’ve had, and I have found that I don’t particularly like the smoky flavor of them; in my experience, along with gunpowder, Chun Mee tends to be the lowest grade of a green tea that one can get.

Appearance and Aroma of wet leaf: Like any Chun Mee I’ve seen.

Value: I got this during one of their sales for 30% with free shipping: for eight OZ it was a little over $8. Still, it was not worth it to me at this price, which averages @ $1 / OZ.

Overall: I am disappointed with this tea. I took a chance on it and it didn’t pan out (in the larger scheme of things, that’s OK, because overall I still consider myself fortunate considering the risks I have taken when it comes to buying various green teas before drinking them first). Art of Tea doesn’t call it Chun Mee, but it looks, smells and tastes like any Chun Mee I’ve ever had (I’ve tried at least two, if not three, before this one). I don’t think I would have bought this had I known it was a Chun Mee style/type green tea.

After brewing it up a few times initially it has been sitting in my cupboard all winter and spring, and I’ve been wondering how I could possibly put some use to it (I don’t like the taste of it on it’s own). Recently, I decided to get some use out of it by adding it to the second and third steepings of Teavana’s Yunnan Emerald Buds (which my wife and I both generally like), and twice I noticed a strong astringent taste which I did not get when brewing up the Yunnan Emerald Buds on their own. So, this morning I made a spontaneous decision: I composted the rest of this Yun Wu (probably about 5-6 OZ of it). This is THE FIRST TIME I have ever simply put unused tea into my compost bin (at least then the plants can get some use out of them). I’ve been using up lots of old, not-so-great tea off-and-on all year, and, quite honestly, I’m tired of ‘worrying’ about ‘wasting’ tea (I call it my ‘efficiency shadow’, as in, if I throw something out without using it, I judge it is wasteful, and for some reason I feel shame about it. ENOUGH!). I’m glad I am rid of it. Life is too short to drink sub-par tea, n’est pas (feel free to correct me if I’m mistaken about this, but I think that’s basically how you say, “is it not so?” in French)?

Shoot I didn’t realize this is on beach street?! My daughter is going there in a couple weeks, need to have her check it out! All my grandkids were born in SantaCruz!
Hope the other tea’s are better than this one!

I also bought the the white tea sampler in the same order, and I judge they were of decent-to-good quality (I still have to write the review for those). They also sent me a very generous sample of another green tea that was better then this Yun Wu. So, I’m still mixed about their teas, but you or your daughter may have a totally different experience. I’m sure physically walking into their shop would be a much more rewarding experience than buying from them online. If your daughter decides to visit them, I hope she has some luck finding some great teas!

Tea bath for your feet! That’s what we do with tea we feel we can’t pass on or drink.

Really? Interesting. What does it do for your feet?

At best make your feet smell nice. It’s just like a regular foot bath. I make the water as hot as I can stand it so it really just relaxing my foot muscles and gives me good starting point for exfoliation. If you have super sensitive feet it may tickle as the leaves are settling. I’m not sure if you can soak the goodies in tea through your skin but it still feels nice. Then you can compost the leaves after that!

Missy: Thanks for more info. Doing that may least assuage my guilt a little.

teataku: I just checked, and according to Webster, you are correct:
http://www.merriam-webster.com/dictionary/n%27est-ce%20pas

Meh. I agree with the other tasting note. This tastes like, at most, your average Chun Mee. In fact, I think I’d rather just drink water over this…which is sad because I actually enjoy 99% of green teas I taste.

Sub-par for sure. Glad I only got a sample of it.