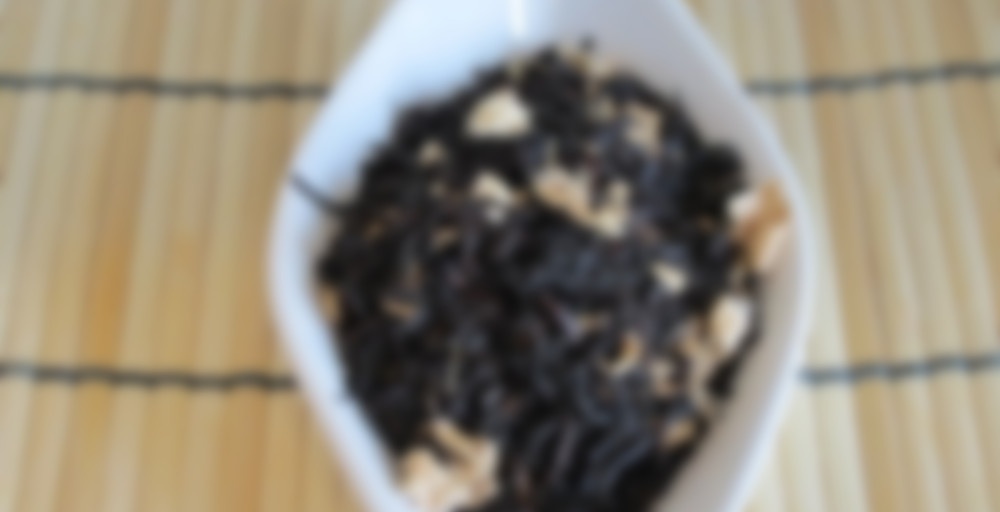 by Aromatica Fine Teas
75
You

I brewed a teaspoon of this tea in a cup of freshly boiled water for five minutes. The scent of the dried leaves was of vanilla more than anything else. Once brewed, the vanilla scent became even stronger. I drank this black. The first sip was of the black tea tannin-y bitterness while vanilla lingered behind. At times, there were hints of spice from the ginger but over all I found it barely detectable. It was also slightly warming in the mouth and the stomach. In the similar way I feel after I drink a ginger tea or take a ginger pill but on a small scale.

It was still enjoyable to drink but I am on the fence about buying it again.

I may add a few pieces of ginger to the next cup I made as the vanilla-ginger combination sounds great.

this one was on my wishlist and VariaTEA obliged. I actually quite enjoyed this one in terms of a tea versus living up to it’s name. From this one i get largely a really nice black base assam with vanilla and a hint of ginger. I’m always a fan of MORE ginger than less, so for me this is much more like a vanilla cream tea than a ginger cream. still though, quite tasty…just not quite it’s name.

It was actually one I got through Amoda and was gonna send to MissB but never got around to it. I figured best to pass it along before it got too old and knew you wanted to try it.

This blend is a mix of Assam black tea, ginger pieces, and vanilla bean pieces. The dry leaf is pretty true to expectations, and I’m pretty sure I can distinguish the chunks of vanilla bean from the black tea. The ginger pieces look a bit stringy, but that’s okay.

I’m surprised by how well the vanilla and ginger meld together, smell-wise. They create an aroma that’s soft and gentle, and they blend with the black tea to create a scent that’s actually kind of reminiscent of mocha/coffee. I normally associate ginger with fruity and spicy flavours, so this earthier, sweeter profile is unexpected.

I took a big heaping spoonful and steeped it with a pot of just-boiled water for 3 1/2 minutes. The brewed tea was bit less mocha-like, with the ginger and vanilla flavours becoming more distinct as they wafted towards my nose. Even after only 3 and a half minutes, the tea was a really rich, eye-popping brown.

However, I didn’t taste much ginger or vanilla when I tasted it. The most dominant flavour was the Assam base — brisk, malty, a tad astringent, with a bit of citrusy hint underneath. If you had just given me a mug of this straight-up without letting me know what tea I was drinking, I would have been able to guess that it was an Assam and that it was flavoured, but I wouldn’t have been able to tell what it had been flavoured with.

doh. this one sounded promising…

It’s not bad – it’s just that it was more subtle than I was expecting. I’m pretty sure I can see whole vanilla beans in the leaf.

ginger should never be subtle :)

Another tea bites the dust. I preferred this cold brewed over hot, as I found cold brewing this brought out the ginger flavour more, plus the cream aspect morphed into caramel. I’m enjoying the remaining bit cold brewed with DAVID’s Spiced Pumpkin. The two make a wonderfully creamy and spicy duo.

Of the four teas that were in the December Amoda Box, I think that this one was my favorite. Or at least, it was the most memorable for me as I sit here and type this out. I really like the combination of ginger and cream. The sweet, creamy notes soften the spicy ginger to create a sweet-yet-spicy combination that I really LOVE. The Assam is rich and flavorful – the perfect base for this. The malt plays well with the cream notes to create an almost caramel-y experience. The ginger adds a lovely spice note.

this one sounds yummy! ginger! cream!

I am going to look into this tea :D I am a ginger fanatic!

It’s a really lovely balance between the two. I love ginger and I love cream anyway … but together they work astonishingly well. Much better than I would have imagined!

Time for some lazy notes! I have a lot of untried flavored tea samples from various sources, and since I haven’t been enjoying flavored teas much lately, I thought it best to get them all over with in one sitting. So this one is first up, and it came from the December Amoda box. Dry, it actually smells almost boozy? Must be the vanilla flavoring. I can also smell a bit of ginger.

The steeped tea smells much more gingery, but I can also smell the vanilla still. The taste is actually less gingery than I expected, which is a pleasant surprise. And it does taste creamy and vanilla-y. Still, never going to be a favorite since I don’t like ginger.

I really loved this one. Then again, I do like ginger, so it’s pretty important to like ginger for this one! Yeah, this one was my favorite of the box.

Yeah… I’m a known ginger hater, so I skipped giving it a rating. :P

Merry Christmas to those celebrating and Happy Holidays to all :)

When they say Ginger Cream, they really mean it. The dry leaf even smells creamy. It’s amazing! And as this morning’s eggnog latte, it’s like gingerbread in a cup, except super creamy gingerbread. Seriously, this one is good! A great way to start the day.

Oh my goodness, this is definitely something I need to try. Merry merry to you as well!

I can hold the rest of the sample for you and pass it along when you return to Canada :). Anytime I can share something with you, I am more than happy to do so!

Oh man, now I want to drink a ginger tea! Ah the power of suggestion!