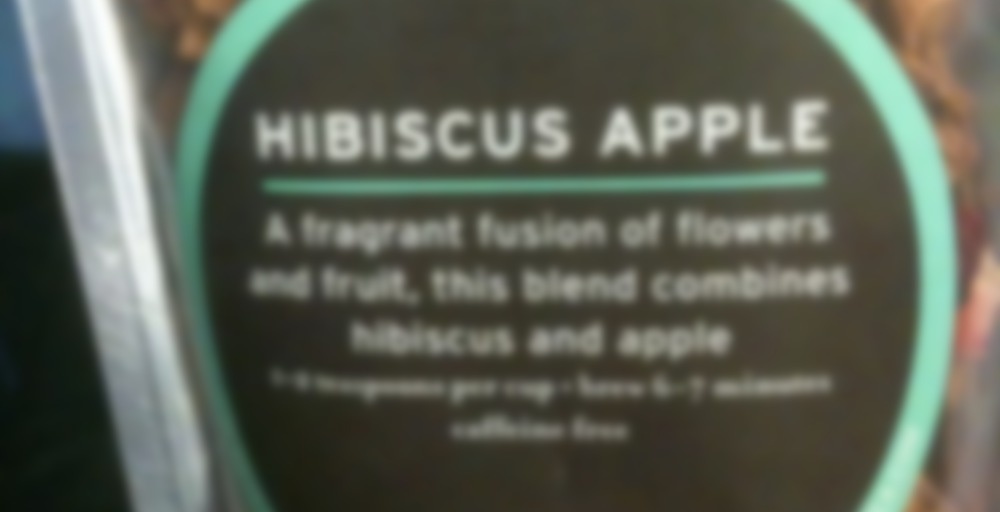 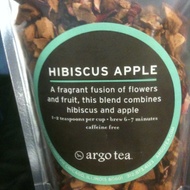 A fragrant fusion of flowers and fruit, this blend contains hibiscus and apple.

tried iced: a little better, but not much

You see both these flavors added to teas frequently. Maybe they should stick to complementing a tea. It might be time to do some blending. You could try throwing in some black tea like a strong English Breakfast next time.

I’ve had some tart apple tisanes that have worked, but i think you need to be careful of how much hibiscus to lemon to apple you do – great point thugh, i wonder if a honeybush could have saved it

Wow…can you say Sour Apple Punch (remember the pink straws coated with sour sugar sold in a pink and white wrapped box like licorice)? This tisane totally reminds me of that flavor. It is so sour it makes my mouth pucker. But I LIKE it. Weird, but it’s sweet in it’s own way, and it reminds me of candy my younger brother and I would always get (he’d get the blue I’d get the pink). Yum! I doubt this would be a tea I crave often, but I do love the tartness it has.

SOUR APPLE. Plain and simple. It’s the only thing I can taste. I suppose it would be ok iced…just can’t get past the hibiscus. It will seriously be the death of me. I wish I liked it because it’s very good for you…but…sigh…

It could be worse. Yeah…I should say at least I am drinking it…I under infused and used less of the amount. Still fruity, tarty, herbal…no actual tea.

I had no idea hibiscus is good for you. Hmm, I have a history of high blood pressure in my family. Better start finding a hibiscus tea that I like now!

Rich in Vitamin C, helps cool the body in hot weather, helps lower blood pressure as well as cholesterol and helps strengthen the immune system. It may help with coughing issues and may help reduce fever!

I really wish I liked it!

Yes, but can it make french fries?

drats. I’ll have to try this one, as I keep forgetting to try it. I love the Hibiscus Pineapple Lychee from RoT so I hope I Love this one too! Sorry it wasn’t your cuppa tea TeaEqualsBlis.

My first attempt at this was an utter and dismal failure, I was almost ready to agree with everyone else, the tea was overpowering, too strong, and just didn’t taste very good with instructions on the container.

I looked up some sites on brewing loose leaf tea and decided to try it a little different. First instead of using a full teaspoon, I put just enough to cover half the bottom of my little styrofoam cups. I know that’s not an exact measurement, but, because this tea has lots of chunks of apple and such, you could probably translate it to a light teaspoon, just be a little less eager to get a huge amount. Second, instead of boiling water, I had hot water and let it cool for just a minute or two and then steeped for about six minutes. I shall do more science in the future so that I can get exact temperatures and such, but, doing it this way produces a very delicious cup of tea and is not near as overpowering as my first taste.

This tea is so beautiful. First of all, I didn’t even need to use a drain. Then as it was cooling off, it gave off this flowery and subtle aroma, and the color is lovely. A warm purply fuchsia. Every sip I take is full of the scent and the color and alas, the taste. It’s sweet and tart. I am happy that I have this new tea. It’s best when it’s hot, and you can steep it for as long as you want because it doesn’t get bitter. Definitely try this! I am increasingly inspired with each sip, this tea is just positive.

The aroma of the dry tea is powerful and full of Apple. It kind of reminds me of artificial tangy apple gum. Running hot water through the infuser brings on a wave of pink and purple in my mug. The color of this tea is beautiful! The flavor is pretty well blended between hibiscus and apple. It tastes fruity and tangy, but fades quickly leaving a faint apple cider taste.

Not bad, but make sure that you don’t over steep. Otherwise it is just undrinkable. It gets that kind of mouth puckering powdery feel to it. So, under controlled circumstances, cold… not bad. _