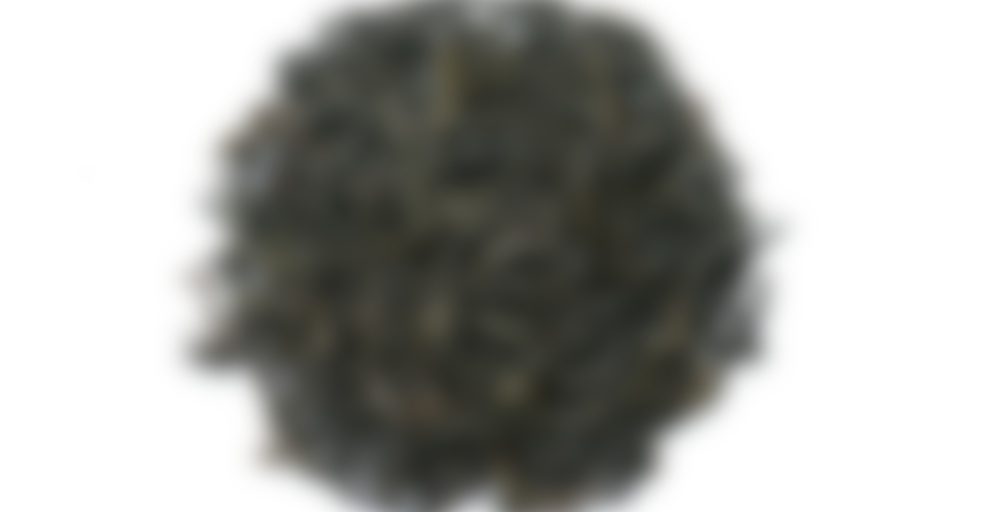 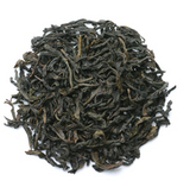 Jade Cassia, also known as Rou Gui in Chinese, takes its name from the Cassia tree, or what is more commonly referred to as ‘Chinese cinnamon’. It is said that the natural aromas of Jade Cassia closely resemble the spicy fragrance emitted from the bark of the Cassia tree. This tea presents a broad flavor palate combining high aromatic notes and a deep roasted body.

Well, the Traveling Tea Box certainly did its job for me. With this wonderful tea, I have now found a company that I never knew existed AND I will soon be placing an order with them. This oolong is classic. It’s soon to be a staple oolong. It smells delicious, tastes delicious…and it’s the first oolong I’ve tried in which the second steep is bake-y. A bake-y oolong! Oh yes. Ready the debit cards, folks.

The tea isn’t overly complex; it simply has a no frills, traditional oolong taste. And it’s great! Lightly roasted and smoky tasting, I just love it. No vegetal taste, just how I like it. I’m all giddy! I usually refrain from eating while drinking tea (other than the occasional cookie or sweet getting dunked in), but I would love to eat several traditional Chinese dishes with this tea in hand. It’s so good.

The sample from the TTB ended up just where it was meant to be.

Thanks to your post, I just discovered them too (at least their website)! Did you see their boxed biscuit set of pu-erhs? Oh, want! They have the most inexpensive lovely teaware, too! :)

Oh no, just when I thought I’d ordered from every company on the planet I could possibly want to order from. Sigh. ;-)

It’s Steepster – somebody is always posting a scrumptiously delectable tasting note and then we can’t help but be intrigued!

I’ve seriously had my nose in my mug for a good ten minutes. Beautiful. It smells smoky-sweet and amazing. Huffing tea is much more entertaining than studying for a gigantic Japanese test I have tomorrow. >__<

After two minutes the liquor was already a bright honey color, making me pour the first steep too soon. The flavor is good, but I have to go looking for it a little. Smoky and floral, which sounds kind of weird, but it’s tasty. As it cools the smokiness seems to dissipate somewhat, letting the sweet floral step forward. Actually, I think the sweetness and the floral are two separate entities. Floral and a fructose sort of sweet. I can’t decide what kind of fruit it is or even if I could tell in the first place. I don’t feel like this would be good iced, since the little bit left in my cup that cooled completely is pretty flat, with a grassy sort of taste to it. I don’t even know if oolongs can be grassy…oh well. Not unpleasant, but not comparable to what it had been.

Alright, I left the second infusion for 3 minutes. The color is slightly paler, but not by a lot. The nose is similar, but lighter on the smoke. It’s baked goods rather than campfire. As I was thinking that, when I pulled away from the mug to type, I swear it smells like donuts. My roommate thinks I’m nuts as I’m leaning over and sitting up like one of those sippy bird figurine things. I’m getting, very specifically, donuts, but only in the first few seconds after I move away from the steam. How perplexing. Now, the smell of donuts always makes me happy, but whenever I eat them I decide never again. They’re never as delicious as they smell, plus fatty food tends to make me feel a bit sick (taste aversion learning, perhaps?). It never seems worth it to eat one, but I adore being in a place that makes them. Even if it’s completely ridiculous that I think this oolong smells like donuts, I’m ecstatic.

My first impression of the taste is that it isn’t as rich as the first cup, which I felt could have been stronger. This makes me think that I didn’t use nearly enough leaves. I seriously need a scale and/or the sense to stop being so stingy. There’s a really slight smokiness, but mostly there’s a baked goods type of caramelized sweetness. It’s delicious and I wish I could taste more of it! I don’t think I’ll get a third steep out of it, but I’ll do one anyway, just in case. I think I’ll do quite a long steep, just to try and get everything out of the leaves, but I’m not too hopeful.

I’m giving it a rating based on the assumption that I messed up by not having enough leaves. I’ll reevaluate the next time I have it, but as far as I can tell I really like this!

The smell of donuts makes me happy too…but I usually eat one. I might have to try this tea. Donuts and oolong, oh my!

Oh yeah…let me know if you want to try the Strawberry Shortcake white tea. I can send you some! lfinch8@gmail.com

I’ve worked at a Dunkin’ Donuts and never again will I eat one. I think I gained like 5 pounds in the first month, donuts and coffee with cream. This tea however, I am most certainly putting it on my “to buy” list.
I feel your testing pain, I just got my butt kicked in Greek.

I have so many comments I want to make that have nil to do with the actual tea review.

1. I want to start a band called Huffing Tea.

2. The drinking bird reference makes me think of that episode of The Simpsons where Homer gets the bird to press the key on his keyboard while he’s “working from home.”

3. The donuts also made me think of The Simpsons.

But the tea sounds really, really good. Adding to list.

tears why’s everyone so nice to me!? Here I am, ignoring steepster, while there are so many happy comments on my last real review. crying I’ll be back to being active soon.

My test was just fine. I’m miffed, though, since I was one point away from an A. I think Japanese is the only class in which I’m an overachiever. o

I’m drinking this again today and, though I don’t have time for a full review, I still feel the same. More leaves was a good idea, but I’m not getting donuts so much anymore. It’s a more complex, baked goods type of smell that’s present in the taste a bit as well. I’m so surprised the sugary qualities.

I got this one from the Traveling Tea Box. It was a good basic oolong. I’d say kindof bakey and kindof roasted. Not necessarily something I’d seek out in an oolong, but a good cuppa (or three resteeps :) ).

The last Andao in my cupboard that hadn’t been tasted and written about.

In the tin, it has a roasty aroma, mostly mild but with a sharp note that is common in my experience of dark oolongs.

Gaiwan. Rinse. 195F, 15 seconds plus 5 seconds for each steep thereafter.

The tea is a light amber color and clear, and it has an amazing, amazing smell and flavor. I think the amazing part is mostly because this flavor is so surprising from the smell of the dry leaves.

I totally expected one of those roasty toasty dark oolongs. This has almost nothing in common with those flavors except in the dry leaf.

The overwhelming impression I got was of sweetness in the aroma, and something fruity. But sweet to the point of almost being candy like. My first thought was ripe pineapple, but it doesn’t have the sharpness that’s present even in a sweet, ripe pineapple.

The second steep gave a darker amber color and an equally sweet and fruity aroma and flavor. This time I thought of plums, though that’s also not quite right.

The description from Andao mentions orange floral tones — not sure what those are like and whether they are like oranges. I tried to find a citrus note in this but that’s not what I’m getting.

The third and fourth steeps delivered a lovely honey note.

This is a special one.

a decent rock tea. not exceptional but decent.