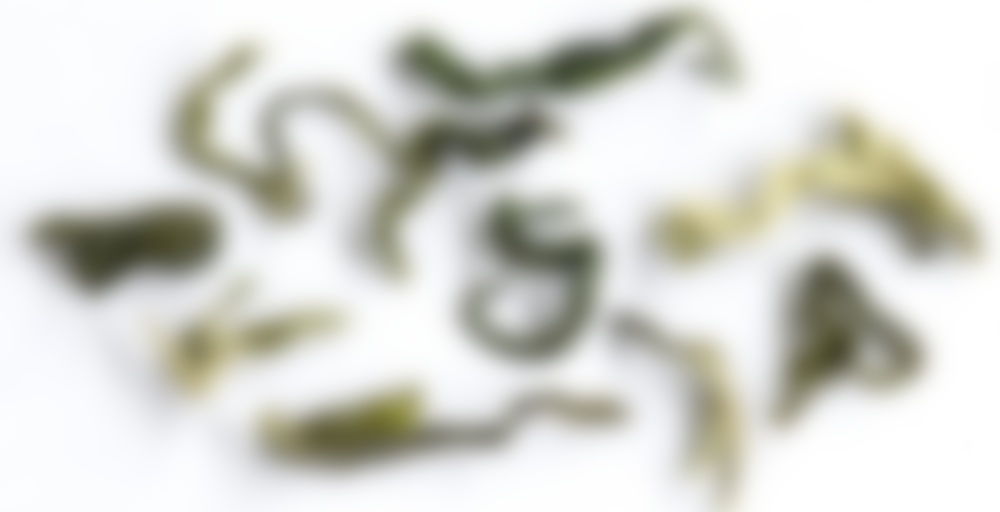 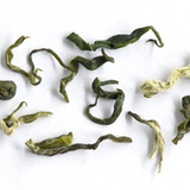 I typically do not have an affinity for green tea. The problem lies not in the tea, but rather in my limited palate. A bad green tea tastes like nothing to me. Just warm water. A good green tea, and I suspect that this is one of them, opens up a world of vegetation in my mouth.

“Spring Snail Shell” tastes like the smell of a really funky warm rainy day in Florida when the heat and water brings out the vegetable smell and the air smells like burgeoning fecundity. It tastes rather like lounging in deep meadows (much like a snail might do) and taking in the green, grassy, aroma that is part funk, part fresh with a dash of sweetness and clarity.

I did think of Andrew Marvell’s line: “A green thought in a green shade” from “The Garden” when I drank this. I suspect that green tea aficiandos would really like this tea. And, as I finish my cup here and now, I start to think that perhaps I should purchase some and maybe I should make certain to keep green tea on hand. It’s a nice change, and it makes me feel like a “back to nature” person which is pleasant because my inner essence is so very library and bedroom.

Edited to add:
Three days later, I have sent this Spring Snail on in the Travelling Tea Box. Yet somehow I long for it. I keep thinking maybe I could just have some spinach—but yet that isn’t it. Maybe I do want some more of the grassy, vegetable tastes? I simply will have to order some. I’ve got a Jones and his name is Mr. Spring Snail.

That is a very intriguing name! :)

I think it has to do with the shape of the tea leaves: “The grayish green, slightly tippy leaves are processed by hand and tightly rolled into spiral shapes, resembling tiny green snails.” http://www.svtea.com/prodinfo.asp?number=T0362%20%20%20%20%201&variation= ; e.g., like a chun mee tea (precious eyebrow tea) has that eyebrow shape to it’s leaves.

Yeah at 1st I thought it tasted like snail, then I read the tea’s description.

UGH, doesn’t bear thinking about if it tasted like snail LOL!

Escargots can be quite good. At the bars in France they serve them in dishes like little peanuts. I no longer eat little sentient things, however, and I don’t believe any snails were destroyed in the making of this tea.

Does it count as backlogging if I’m copying something I wrote earlier? Part of the reason I write real, paper notes is so I don’t get stuck on steepster when I’m supposed to be doing student-y things. Also, sometimes I’m conducting mini tea tastings in class…>__< I can’t have school getting in the way of tea, come on!

Anyway, I like green tea, but I don’t drink all that much of it plain. Usually my greens are scented and I want to explore the genre more thoroughly. That’s why when I placed my recent order at Andao I was sure to order at least one green to try out. I don’t know how much I’ve actually paid attention to the flavors before. As far as I can remember I’ve never had green tea I didn’t like, yet I’ve never really been in love like I have with scented or flavored varieties.

As I was sitting in class, I noted that this particular tea (when steeped for 1 minute with quite cool water) was pleasant, rich, and nutty. I think of nutty as something like almonds, but without the toasty quality…which could be totally wrong, but oh well. There is a sort of sweet aftertaste that I had trouble putting in to words. I settled on “green”. There are some really slight hints of what might be bitterness, but I can’t decide, that appear towards the bottom of the cup. I’m not sure if that’s from cooling, settling, or buildup of flavors as I drink. Even though I avoid eating while drinking something new, I had this urge to eat something savory and salty…which I did, and it was fantastic!

The second infusion was milder. The nuttiness is toned down, but is still the dominant flavor. Smooth. There’s a slight astringency that makes it feel clean…is there such a thing as an after-feel? Maybe there’s a bit of sweetness, but it could just be the absence of bitterness. I’m not sure if that’s possible, since I also get some slight bitterness simultaneously. There is definite sweetness coming out as it cools, after which the astringency/bitterness come out. I know I use such strong words, but this tea is not jarring at all. The second steep was actually quite gentle.

Overall I found this tea interesting and enjoyable, but I wonder if it’s because I’m still learning and I don’t know better. Either way, I’ll have no problems finishing and enjoying the rest of my 50 grams of it, but I want to do more exploring before I come back again. Now that I think about it, I’m finding it rather difficult to rate teas…I’m terrible at scoring anything, but I feel like I have too much stuff between the two green smileys! What to do?! Am I not being critical enough? Maybe I tend to only drink things I think I’ll enjoy…or maybe I’m just ignoring what I don’t like so much. Argh.

School should never interfer with tea! Ever. I’ve totally have tea time in class, and instead of finishing my work, I’m jump on here asap. Anyways, this sounds absolutely delicious! I will most certainly aim to try this in the near future.

I feel like school is lucky I have tea! I would never be able to even pretend to function without it. There should be no complaining on its part ;p

It’s late, so it makes sense to personify school. u__u