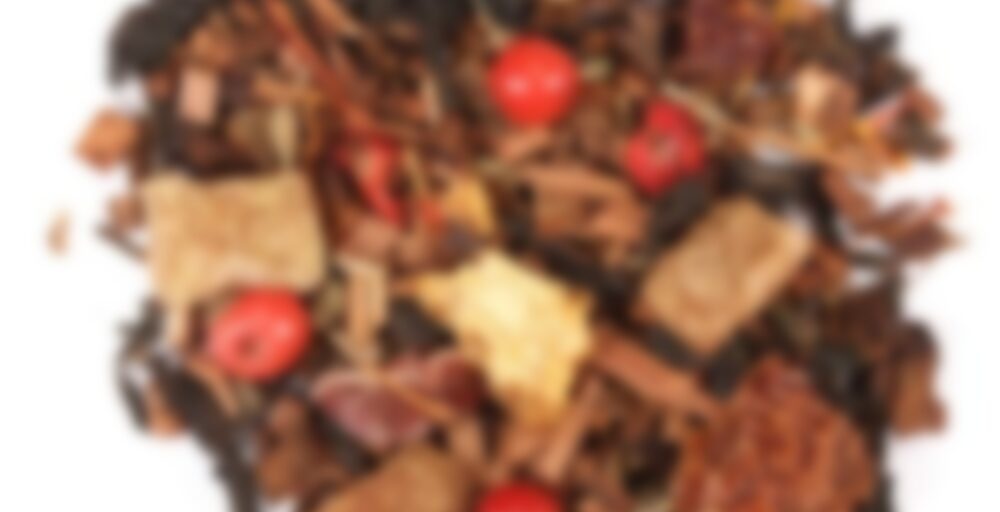 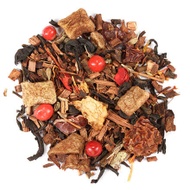 Crisp autumn nights call for warmth and comfort and little can better provide them than an autumn bonfire. Behold our bonfire blend: Honeybush hazelnut and cocoa nibs relax and ground you, while a spice blend of aniseed, cinnamon, clove, and orange peel offer cozy comfort and zest. Apples and rose hips add soft sweetness while a touch of Lapsang Souchong black tea and red peppercorn offer hints of smoke and the flickering spark of heat. A perfect cup for fireside enjoyment or downtime dreaming.

Fall marks the beginning of cozy season. Whether that means a trip to the orchard in your favorite flannels, a cup of warm cider, or a night with friends around a blazing fire, it’s all about getting warm and toasty before the cold winter months set in. And what better way to capture that feeling than a warm cup of your favorite tea? Enjoy the sizzle and smoke of a night around the fire, the warm spices of your favorite cider, and that faint whiff of a walk through the orchard in a tea you can enjoy all year round.

Received this tea in swap year ago! From Izzy who haven’t wrote here since she received mine teas and commented only one from them. I miss her a bit, but anyway THANK YOU!.

It is evening, after elections to region local government (no big powers, but at least someone between people and country government). It has ended as I have hoped; same as last 4, ehm… 8 years. We went to cider making in morning as well — we had lots of apples which won’t stay good even in cellar (Wealthy varietal), so we made non-alcoholic cider (not sure about translation, but my dictionary says so). We had around 75 litres of it! Can’t sent abroad, it won’t survive the trip.

ANYWAY, YOU WANT TO HEAR ABOUT THE TEA, RIGHT?
The tea was quite smoky when brewed, but taste is rather on sweet side, hard to recognize something but honeybush and hints of smoke. Something is there sweet like licorice. But is does not have the cloying effect. It is has got some generic fruit notes too, maybe mostly apple skins, not even the fruit pieces taste.

Overall, I am rather sad. I expected some smoky, maybe baked apple, taste or something what would remind me a bonfire, but none of them.

That’s a lot of cider! Too bad the tea was disappointing.

I would love to try your cider.

derk: come here in September-October time frame and you will get lucky to try it (if we got apples)

The tongue twister is hilarious!

In England, a very hard cider with a high alcohol level is called ‘scrumpy.’ It’s ‘rough’ aka unfiltered and usually made from a variety of wind fall apples. Country pubs usually serve it and won’t sell you more than 2 servings due to potency. English ‘cider’ is alcoholic, lower in alcohol, pasteurized and bubbly/sparkling.

Thank you both ashmanra and White Antlers for claryfing cider stuff to me! I could use apple juice but I felt it isn’t exactly that. It is “freshly squeezed apple juice” :D

We almost gifted all the cider or freezed it in the freezer. So, almost done.

Thanks White Antlers, we may try it as well :)

Have you ever had apple butter? That’s one of my favorite apple products – apparently it stores pretty well too. https://en.wikipedia.org/wiki/Apple_butter

Autumn Harvest! This is another Adagio sampler I had tucked away. It was a freebie with some promotion at some point or another, but I was never really excited about it because it contained lapsang souchong, one of the few teas I don’t like. The first time I ever tried lapsang souchong (the typical, smoked variety), my friend and I found it like trying to enjoy a nice cup of black tea while sitting by a campfire, but the wind keeps blowing the campfire smoke right in your face, completely ruining the experience. And since smoke is one of my migraine triggers, the strong aroma alone was enough to give me a migraine that day. So I swore off the stuff ever since that tasting.

This tea is blended with honeybush, apple, rose hips, orange peel, and spices, so I was sure the lapsang would be toned down a bit. I was willing to give it a try… if for no other reason to test if maybe I could handle it in blends. I still had my trepidations because it was a known migraine trigger, but jasmine used lightly doesn’t bother me, while heavily-scented “perfumey” jasmine does. So it was worth a try.

I found the leaf quite attractive looking, I’ll admit, and it didn’t smell too bad either; it had a strong peppery cinnamon spicy orange scent, with some sweet and smoky tones. Steeped up, the smokiness was more apparent, and making me a little more wary, but I could also smell a good deal of warm cinnamon. The tea itself was not as bad as I was expecting… but I wouldn’t say that blending the lapsang souchong was a taste-changing revolation for me, either. The tea tastes like a slightly sweeter cinnamon spice black with some rich orange notes and a smoky finish. It reminded me a lot of Hobee’s house tea, which is a Cinnamon Orange black tea, only with more subtle spice notes and a lingering charcoal-smoked flavor left on the tongue.

It was okay. Since I’ve had other orange spice teas without the smoky notes, and I’m not particular a fan of smoky flavors, this just really didn’t do much for me. But it also wasn’t enough lapsang to give me a headache, so it does seem I need a pretty strong smoky hit to trigger the headache effect. I can see the appeal of this as an autumnal blend, with the mix of orange, spice, and smoky flavor notes, and am sure this would probably hit the spot for many. It just isn’t particularly the right fit for me.

I have one other blend with lapsang in my collection, so maybe I’ll finish that one off today and do a comparison.

On this cold, windy, and wet autumn day, this burnt sienna colored tea provides a warmth that touches the lips and hits the soul. I’m a huge fan of Lapsang Souchong, and knew that when I purchased this blend, that I would not be disappointed. The smokey and spicy aroma of this tea is a delight to the senses. The peppercorn, cloves, and cinnamon really bring out the boldness in the Lapsang Souchong, while the Honeybush mixed with the fruitiness provided by the oranges and apples, really brings a nice balance to this festive tea. The last note that I picked up about this tea is the mild undertone of the hazelnut. It’s not overpowering or fake, and lingers for a bit in between sips. This is a tea I would buy over and over again.

I impulse bought this tea as soon as it came out and was surprised with how much I like it. It’s sweet and smokey and perfect for my afternoon mug. I hate aniseed though, so I could do without that note.

I love the idea of this blend: something for autumn, peppercorns and spice and smoke— truly some of my favorite sensations. That in mind, this tea was much sweeter than I expected. The apple and aniseed and cocoa nibs help keep this blend gentle and dessert-like, and orange flavoring keeps it bright and drinkable. The smoke is just a teeny, tiny whiff. I also like that this tea is low in caffeine, so I can drink it anytime without being so hard on my body. I’m glad to see adagio making seasonal blends of their own, it makes it fun to stop in and shop on their site. But I do wish this blend had some more gusto. A blend called bonfire didn’t seem to have very much cinnamon flame or savory woodsmoke. Maybe I’ll pump up my personal batch with some more lapsang and see how it goes.

Edit: I’ve been brewing this tea with about 50% lapsang souchong mixed in and it is a lovely sweet-savory woodsmoke experience. Would recommend.

It’s nice to see Adagio rolling out more seasonal stuff these days. Nice, and very tempting. I had some points racked up and decided to get this and a personal blend I made called Haven. Plus Cream because I missed it and it goes with everything.

Now, this tea is a strange one. A honeybush with a touch of lapsang? Ok, different but interesting. Add hazelnut? Sweet, sounds good. Red peppercorns, cacao nibs, anise, and cinnamon? Amazing! But then they added orange peel, rosehips, clove, and apple pieces on top of all of that. There’s just so much going on. Somebody may have gotten a little too creative.

The aroma has me cautious. The husband (not a tea drinker) said it smells like “chocolate and bubblegum”. I’m not getting either of those, but the fruit is bright and in the forefront, but kind of clashing with the hazelnut. And the lapsang’s smoke. Steeped, the tea has a strong orange spice and nutty smoke scent. It’s intriguing. And fruity. And definitely reminds me of fall and winter.

The flavor is actually very warming and comforting. The hazelnut and the orange peel against the honeybush taste like a lovely dessert you’d serve hot with vanilla iced cream. With the lapsang to back it up, it tastes toasty and baked. The spices back it up but don’t shout over the main flavors. The clove is especially present, but I smell it as I sip more than I actually taste it.

I could definitely see myself sitting by the fire drinking this. Heads up, though, this is a limited edition tea, so if you wanna try it, you might wanna get it soon!