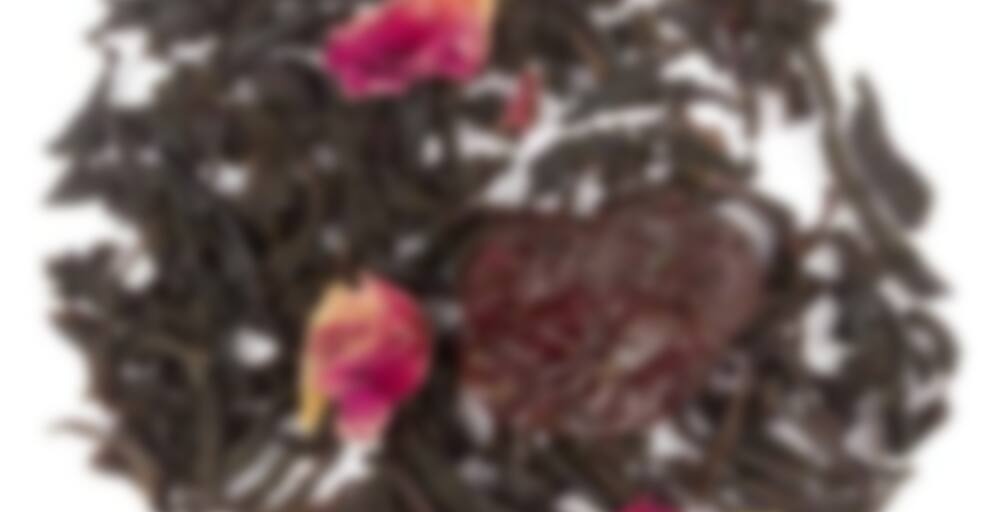 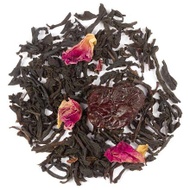 This premium Ceylon tea flavored with summer cherries is treat for any Chekhov fans musing in their cherry orchard, delectable both hot and cold. If you’ve never read Chekhov, it doesn’t have a happy ending. If you’d never tried the Cherry tea, it’ll make up for it.

This brew, my dear tea-drinking neighbors,
Reminds me of cherry Life Savers.
I left it too long,
So it came out quite strong,
But I don’t look on it with full disfavor.

(Will give it another whirl iced. Sometimes the strong fruity stuff just does better cold.)

So. The dry leaf smells a little artificial and like they added cough syrup to the base. But, as we know, the smell and the taste are often very different.

But I dunno.. I’m still deciding if this tastes like cough syrup or not. I think if my cough syrup tasted like this, I’d really like the syrup. But.. that’s really not a reccomendation for a tea, is it? For me, it’s also getting a little more chemical and artifical as it cools down.

Sadness. I agree w/ Erin about Adagio’s blacks…the only ones that have ended up okay for me were Caramel and Cream, and then maybe Strawberry, Mango, and Valentines…

are their flavored teas flavored with artificial flavors or actual bits and pieces of fruit herbs and stuff? Most of the pictures looked like just black tea leaves, is that how many companies do it?

Pretty darn good, if I do say so. I was rummaging through my copious samples for something to try and stumbled on the cherry black tea. I really didn’t expect it to be any good, but the flavor won me over immediately. It doesn’t taste artificial and it works well with sugar. Other cherry teas have been awful, but this is pretty tasty. I think I’m going to buy a tin next order.

Cherry Coke-ish would you say?

I wouldn’t have thought of that, but in an odd way, you might be right. I don’t drink soda much, so I’m having a bit of trouble remembering the exact flavor.

Good solid tea with slightly tart cherry hints. I steeped mine for five minutes (two minutes longer than Adagio’s suggestion) and added milk and sugar and was pleased with the outcome. Gentle but definitely present cherry aroma that was both a bit sweet and tart, which was a nice surprise.

I cold steeped this, and drank it iced, and really enjoy it. I wouldn’t say it is a super strong flavor, but it also means it doesn’t taste too artificial. I recommend it for people who like berry flavors, but want something a bit different.

Hey, Steepster. Sorry it’s been a while. Things have been really crazy on my end. I don’t want to waste time on specifics, but I’ve been too stressed to dedicate much time to sitting down and writing. Also, I noticed I was putting a lot of pressure on myself to write about teas – so much that I was guilting myself into anxiety over drinking teas I haven’t reviewed yet. And that’s not cool. Tea should be enjoyed, not worried over!

As far as this tea goes, it’s pretty much what I expected from Adagio, but with a little extra. Mild black tea base that goes well with any sort of flavoring, check. Cute little pieces of dried cherries, check. But there are also pretty pink flower petals? Ooh, that’s unexpected.

The petals add a sort of rosey, lychee-like quality that goes well with the cherry. It’s definitely a tart cherry taste, not black cherry. Though the tea itself isn’t tart, it has the flavor of fruit that probably would be. I can’t say this tastes exactly like candy, as others have said, but I know for a fact that this one of the teas Adagio has enhanced over the years. A bunch of their flavored teas have had their recipes improved, to my surprise. (Caramel, vanilla, and mango are some I noticed, though I’m not really a fan of what they did to the mango…) Anyway, despite the improvements, I can’t say this is what I was hoping for. But I bet it will blend well with the coconut tea I bought!

I wish for less stressful times ahead of you Tabby…

This could be a new fave! The unbrewed tea aroma is amazeballs. Stepped for 5 min with boiling water, there was no bitterness here.

The cherry flavor is pleasantly noticeable, without being overpowering. The base black tea they use seems like the perfect showcase for the cherry flavor. I wish I had some of this tea at work, because I would be making a second cup!

Did I mention no bitterness? Love this. I’ll be trying this as a cold brew this evening!

Edit: The cold brew was excellent. I used room temp filtered water and my libre tea glass. Refrigerated overnight, and consumed the next day. Love this. The cherry is more subtle, but still great. I’ll definitely be buying more of this tea.

This could be a new fave! The unbrewed tea aroma is amazeballs. Stepped for 5 min with boiling water, there was no bitterness here.

The cherry flavor is pleasantly noticeable, without being overpowering. The base black tea they use seems like the perfect showcase for the cherry flavor. I wish I had some of this tea at work, because I would be making a second cup!

Did I mention no bitterness? Love this. I’ll be trying this as a cold brew this evening!

I didn’t like this tea, at all. It doesn’t really taste like cherries to me, more like cough syrup. Prepared with stevia, tried putting some almond milk in it as well. I couldn’t finish my cup of this.

you gotta really like cherry for this…and i do :D its high on my list of flavored teas. it is a bit tart but with a touch of sugar you can mellow it out some.