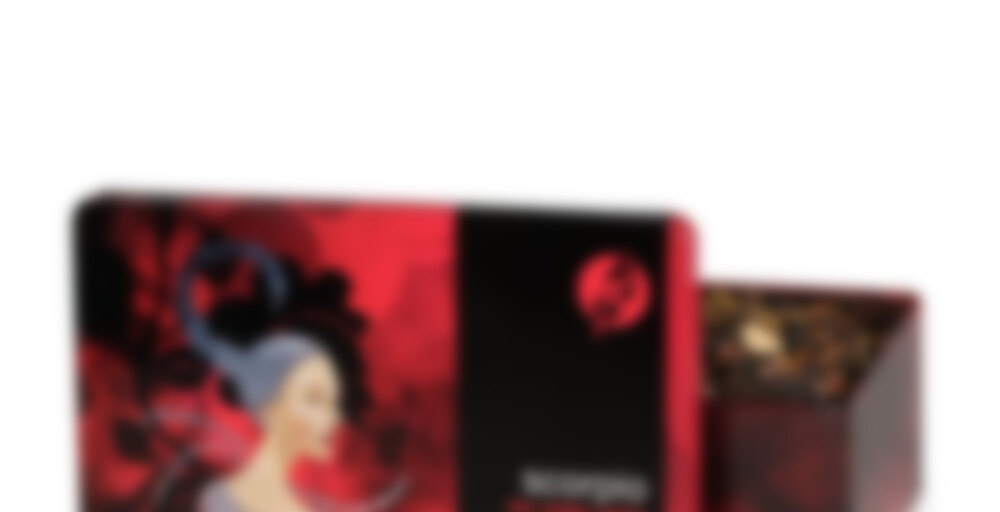 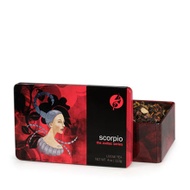 by Adagio Teas
83
You

An intense blend of black tea, rooibos and vanilla will sustain Scorpio’s investigations and secret affairs. Scorpios will not rest until they have penetrated into the heart of every matter, and they need a strong drink to fuel their determination. Chocolate chips and mango pieces add a rich flavor that Scorpios can savor in private.

It has an intense smell of dark chocolate with fruity undertones. It doesn’t taste so much like chocolate than just a rich, black tea. That’s a good thing if you don’t like your tea too sweet.

I love the blend between the rooibos and black tea, as well as the chocolate and mango flavorings. It isn’t too sweet. It smells sweeter than it tastes. None of the flavors really stand out to me, but they all blend together for a very unique, wonderful taste.

I was confused why there were two listings for Scorpio on Steepster, one labeled 2012. It seems the description for this one includes the black tea, where the other was just rooibos. I have the newer version with the black tea.

It looks like I’ve been drinking just Adagio all day long, but I haven’t! I had some Lupicia with me on my walk! But when I got home and was looking through my cupboard I guess this one drew me in. And why not? The tin is beautiful! The Scorpio page on the Adagio website confuses me though, it definitely used to come with options for bag or tin, and not there’s just one option… and the option for the Sampler. So I don’t know anymore! If they sent you the bag, wouldn’t you be mad? Because the picture shows a tin! If they only send in tins now… well, I paid more than that!

I remember not likign this the first few times I had it, its been in my cupboard for awhile. Mainly because of the rooibos, which I dislike. BUt I know better now how to brew rooibos, and can tolerate it better (but still avoid it like the plague).

Alas this one just tastes like a good black tea to me, on the chocolate side, of the spectrum, but I’ve had some straight blacks that have accomplished that as well. Maybe because my tin is over six months old? I have to have it HOT though, or the rooibos flavor will become more present. I don’t get the mango in this, but I suppose the vanilla addition is why it’s so smooth. I like that this tea isn’t too heavy for a black, but I don’t know whether to attribute that to the black, the rooibos, or maybe to the vanilla.

The two listings exist because Zodiac Series started as a customer created blend. At some point Adagio Teas contacted me and asked if I would be o.k. if Zodiac blends would become “official” blends by the company and asked me to design the tins. I agreed and suggested that Cynthia, Adagio Teas specialist, would improve my blends and in some cases (Virgo, Aries, Pisces) would create new blends altogether. After the new Zodiac series was launched (available in a tin only) the old version was discontinued and is no longer available. It is a bit confusing, I know … :)

=D Does that mean that you did all the artwork for the Zodiac series? Because I’m a pretty big fan!

Glad you liked it :) I’ve done quite a bit of packaging designs for Adagio: Body & Soul, Chicago series, Fairy Tales (and all the other kid friendly teas), Master Series and Zodiac teas as well.

I know this is an older review and thread but I just recently bought and tasted this tea and therefore came across it. Tea tasting aside, I just wanted to tell inguna that I love your designs. The design for the Zodiac series were already impressive and then I went and looked at the others here you mentioned designing. Kudos! Very impressive and beautiful work.

This tea is very strong smelling, with the predominant scent coming from the chocolate. Taste-wise, it’s a different story. Comes across as a mild black tea with slight chocolate and fruit notes. I need to get some plain rooibos to try, before I can comment on the effect it has in this mix.