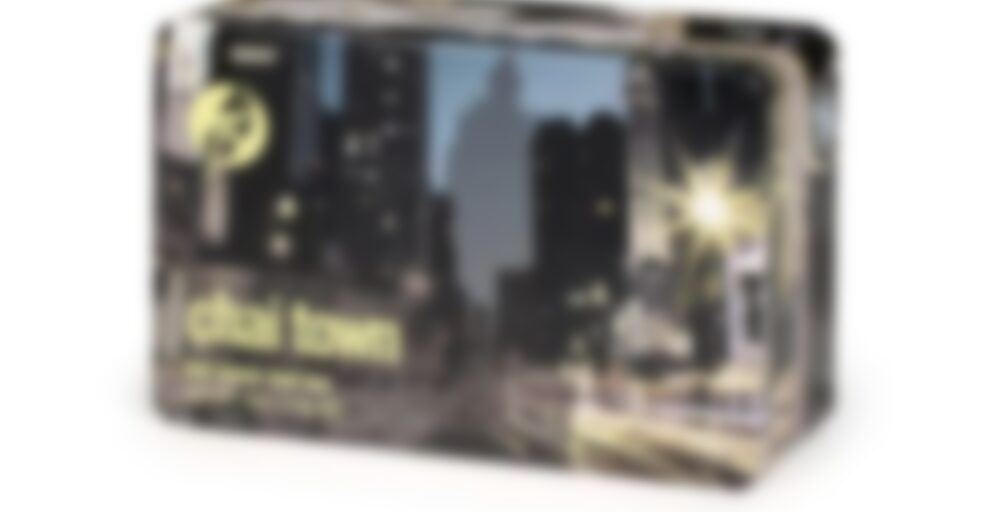 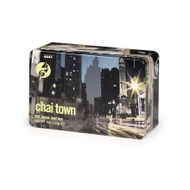 by Adagio Teas
81
You

I don’t like chai. But I am trying. Adagio sent me this tin on accident and I gave a bunch of it to my mom but I still have some left. I think she had asked for the whole thing but I knew she wasn’t going to get through 4 oz of chai in this lifetime, plus these tins are so gorgeous, I had to keep it.

I decided I was going to do the stovetop method with milk and water. I started out not measuring the liquid, realized I didn’t want to do that, and poured what was in the pot into a measuring cup…it was exactly 8 ounces. Patted myself on the back for that one.

So I heated it up and simmered the 2 tsp of tea in it for 4 minutes, then strained it.

This chai has whole dried cloves in it, that’s most notable. It has pink peppercorns too but I think they just make it look pretty. So I was expecting something where clove was strongest, and that’s what I got.

I love cloves. I remember sticking cloves into oranges in grade school and having to do it again at home because I loved it so much.

This stuff tastes like clove cigarettes. I just looked them up because I forgot their Indonesian name and I am amazed the US actually banned them. Oh wait sorry, big tobacco had them banned because they’re a bunch of losers afraid of competition. I don’t even smoke but that’s a total joke (yay I rhymed). Well I guess if you’re missing them you could get this tea.

It’s almost entirely clove, although it’s got a bit of smokiness to it. There’s some hints of other spices, maybe cinnamon, but they’re pretty hidden under clove.

I actually could drink this though. But only because I love cloves so much. I think it might be awesome to mix in an orange flavored black tea too.

That sounds like it would be pretty yummy. I love orange flavored things. Even imitation orange.

I must’ve really missed out on the whole oranges clove thing.. I keep hearing about people doing this and yet I have no idea why cloves are even put into oranges in the first place lol.. My boyfriend used to chew cloves..

They smell good, I guess it’s like a Christmas thing. I don’t think they look aesthetically pleasing so I haven’t done it anytime recently because I don’t want to hang an orange covered in cloves or leave it on a table or counter either lol

“clove cigarettes. " – Haha, that’s funny. I don’t like chai as well so I’m unlikely to order this. Glad you liked the tin. I have not seen real tins, just the photos and I’m curious how they came out. When designing the tin for chai town I did consider adding a faint gangster silhouette somewhere in the shadows but I knew that it would upset some customers so I didn’t actually go for it. But you may very well imagine the scene :)

There are a couple Portillo’s restaurants around Chicago with a gangster theme, you could have probably gone for it because those restaurants are over the top with it! I love the tins for both the ones I have so much, if I liked chamomile, I’d get the third. I kept showing this one to everyone to the point my dad said, you already pointed that out. Oops.

Are you talking about Djarums? Yikes, I almost never smoke, but when I do, I get a pack of those, which I coincidentally just did yesterday and had one a few hours ago haha. Sucks the US banned them.

Yeah, I would smoke them occasionally like 5-6 years ago because I loved clove that much lol. Indonesia actually went to the WTO about it and they ruled in Indonesia’s favor in April so they should be back. Apparently it all had to do with Philip Morris claiming underaged smokers go for them, which is actually true of menthol ones (25%) and NOT cloves (1%).

Same reason I get them sometimes. Love the clove! Good that they’re bringing them back. I still find it bizarre how menthols have stayed (in Canada too) but everything else flavoured is gone (except the Djarums here). Makes no sense.

Djarums are what got me started smoking way back when I was 19 years old. I smoked nothing but clove cigarettes for a year and a half and then switched to menthol (Sampoernos). I quit when I was 21 happy dance but to this day I can’t eat or drink things with a heavy clove flavor. It’s like licking an ashtray to me! LOL

I was surprised it didn’t have that feeling to me but it’s been at least 6 years since I last had one. It just reminded me how much I don’t use cloves as a spice thankfully hahaha.

This came in the big box of samples I got from momo a while back.

I’ve been having digestion issues, so I decided to brew up something with ginger. And what better thing to brew up than a chai, right? Adagio does a terrible job of providing a description for this tea. It doesn’t have it’s own page and they don’t list the ingredients anywhere. I wasn’t even sure if ginger was in here. But, one of the reviews mentioned ginger, so it HAS to be, right? ;)

This is actually not bad. It’s got a little more bite than other chais but it’s not SO overpowering. I might have also used more water than I was supposed to, which helped mellow it out. It definitely has a kick, but not too much of one. I think it’s a nice balance.

It’s a shame you can’t buy this tea separately.

It’s $9 for a 4 oz tin, when you pull it up on the gift page it’s way misleading. Unless you mean there’s no way to buy any smaller amount of it.

Oh you’re right, I misread that. I thought you were buying all three things.

I still don’t see why they can’t just make a separate page for each thing. How do you rate each tea?

Yeah, it’s kind of weird. On the gift page it makes it sound like you buy all three, but then you go to the actual page and there isn’t even an option to buy all three for $25. The horoscope ones all have their own pages, I can’t imagine it’s that much extra work to make it easier to find these because they’re good.

Since I worked on the packaging design I have the ingredients list. Here it is: black tea, cardamom, cloves, ginger, red peppercorn, cinnamon bark, cornflowers, cinnamon flavor.

inguna, thank you! I updated the tea info with that ingredients list.

So I have never been a huge fan of Chai tea, since I just don’t like the scatchy feel of the spices. This being the case, I still felt compelled to buy this since I wanted to try all 3 of the Chicago teas. I mean I live there so I might as well know what it tastes like right?

I had this first a few weeks ago and it was fine. There was the typical scratch of the spices and with this one there is a quite a bit of taste of clover to it. I liked it though for the most part but couldn’t help but think I would like it more it I had some sort of cold or other illness.

Today I got to prove myself right. I have felt under the weather for about 2 days now, probably due to lack of sleep. I decided this morning when I got home that I would brew up a cup or two and see how it made me feel. I have to say that I feel freaking amazing now. My throat feels better and my nose has cleared up, so I guess I got what I wanted.

Gotta love Adagio representing my hometown! I got this at one of the Adagio brick and mortar locations in Chicago using some loyalty points. I am not the biggest fan of chai, but I actually really enjoy this. It is very spicy from the ginger and cloves, with cardamom in the background. Clove is definitely the strongest flavor in this tea, and it actually holds up pretty well to 2 infusions. I’m not sure what black tea they use as a base, but its a nice strong tea that gives this chai a nice full bodied infusion.

Served this Chicago based tea at my book club for a Chicago based tea (Devil in the White City). The peppery spice scent knocked me back in the best of ways when I opened it. The scent translated to the flavor pretty nicely as well.

Pepper, clove, and ginger dominate. The black tea base was just the slightest bit astringent but not at all distracting. In fact, I bet if I dropped the temp down about 5 degrees (F), it wouldn’t be a problem.

I’ve tried quite a few chais lately and this one is my favorite of all the ones that I’ve tried so far. This one is quite balanced in flavors and spices. It packs one heck of a punch without being overwhelming.

Although I love the tins I can’t really get excited about the tea. Very weak, mostly clove tea.I generally like chai but this just doesn’t come up to my expectations. There aren’t any nice big cardamom buds/seeds (?) like I am used to seeing in chai. The aroma as I take a sip is good, very chai-like. But there is just no umph in the taste. I brewed it carefully in the Breville so I am pretty sure it was made correctly. Maybe I’ll try to make it on the stove top with milk.

Yeah, perhaps letting it simmer would allow the flavours to come out more.

I get sad when I’m disappointed by a tea.