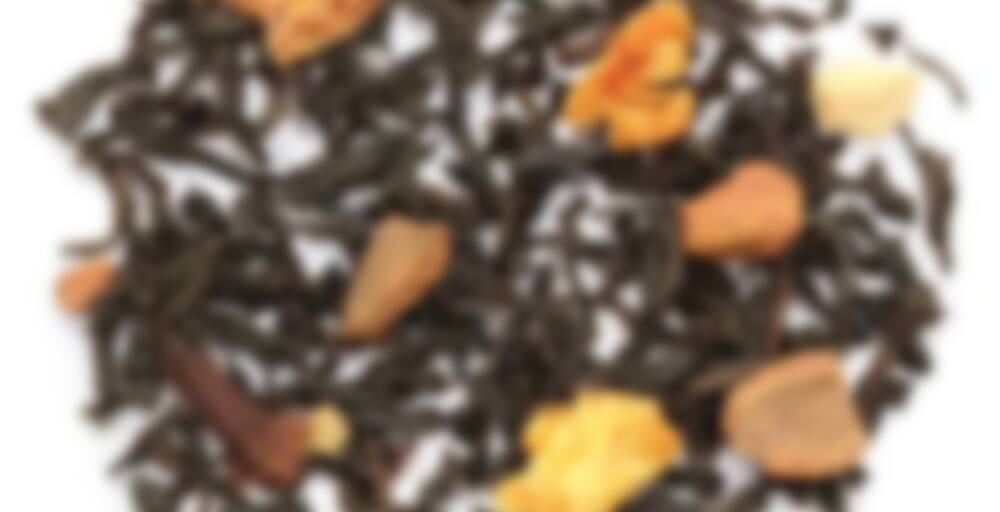 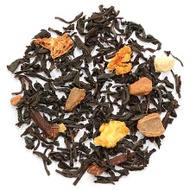 by Adagio Teas
59
You

Since I’m still a crampy mess, and I don’t really want to go crazy with the caffeine intake for the next day or so, I’m drinking decaf.

I think I have a tea addiction. And I don’t mean that I’m addicted to caffeine. No, I just crave the taste of tea. Any tea, really. It’s just a sippable beverage. And with all of the snow on the ground (around 10-11 inches here), it’s really nice to have something warm in your belly.

I’m knocking this one down a few numbers, just because I’ve had a lot of stuff that tastes way better than this now. This one tastes like upgraded Lipton. Not the highest grade of its type, but entirely drinkable and tea-tasting. Again, I’m going to have to resort to using the word “default,” because that’s what it is. If I gave it to a tea novice, they’d be like, “Is this Liptons?” Because my mom thinks it tastes like a better-quality version of the infamous bagged tea. And I’m inclined to agree.

So yeah, nothing special, but it kills the tea craving… for now!

..and if nothing else, a warm mug clamped to your tummy feels pretty good too…

I crave the taste too;) And I think I’m addicting to making it.

I’m with you on the addiction. I’ve trained myself into an Pavlovian response with tea – tea (even the bad stuff) relaxes me, even just the process of brewing it (I’m relaxed before I take my first sip!). So it’s a mental/emotional addiction. But yeah, totally there.

And forgot to add – really hope you feel better soon!

Does tea itself actually relieve cramping? Or is it just the warm liquid?

Caffeine is not good for cramps. At all… but I think warm liquids like soup and tea help soothe the cramps. After all, a hot water bottle feels good too. I think it’s the same effect.

My doctor told me (years ago) to not use heating pads or the like for cramp relief because the heat can thin your blood in that area or draw more to that area or something and actually make cramps worse. No clue if that is accurate but it scared me enough that I don’t do it. Of course, with that theory, an ice pack would help and I don’t do that either. Mostly, I just whine. And cry.

(All stuff everyone wanted to know, of course).

Aww, poor teaplz, whistles as I don’t have to deal with this.

@Auggy, yep. It definitely draws blood to that area. Just think of your stomach blushing lol.:)

Personally, I can’t survive without the heating pad. I wouldn’t worry about the heat for relief issue.

Warning: Science Nerding Ahead: The pain is caused by the uterine muscle contractions that facilitate the whole thing. Heat on tired, tight muscles is helpful (though heat on sprained and swollen muscles is not); more blood flow to the muscles themselves is good (and the blood that’s problematic isn’t blood you can increase or decrease in amount by application of heat!). In some cases the thickness of the blood can be problematic, in which case taking things that thin it can be additionally helpful. Caffeine causes tension in muscles, hence it’s probably not a good plan, but alcohol (heh) or aspirin may be useful. Raspberries and chocolate are supposed to help naturally. Personally, I always spring for pamprin, because when they’re bad I don’t have time to trifle with homeopathy, I need to be pain-free before I kill someone. ;)

Really sorry to hear you’re under the weather. I hope you’re back on your feet soon!

What happened to my comment?
@sophistre: THANK YOU Seriously. I had always been scared by what my doctor told me so I just sort of suffered through since I hadn’t heard anyone counter it. I’m using this as an okay to give it a shot next week instead of wishing for death. So yeah. THANK YOU.

Hey, anytime! Your mileage may vary and all bodies are different, but if it helps you and doesn’t make things worse, you’re assuredly safe. ^^

Yay! I’ve always used my hot water bottle. I just can’t live without it. It gives me a ton of relief, and Auggers, you had me scared there for a second! D: But I’m happy that maybe you can get some relief as well!

Ibuprofen is very very good for cramps as well (which is why doctors will advise Advil or Motrin). I’ll have to look into Pamprin, because up until now, I hadn’t even heard of it!

Thanks you guys for the well wishes. <3 to all!

I purchased a variable temp kettle from Adagio, it just arrived today but I haven’t had the chance to use it yet. I also bought a few teas (of course)

I wanted a nice black decaf but maybe I should have read the reviews of this, oh well. It is very brisk and bitter. Not drinkable at all by itself and barely drinkable with soymilk and Splenda. I’ll have to find something to mix this with to make it better or maybe I should step it for less time? My advice is to stay away! bleh!

Thanks Caile! I think I will wait until I get home to check it out…

Ech, mixing may seem like a good option. At least your new kettle should more than make up for this failure. :)

I made a pot of this for an afternoon How I Met Your Mother marathon. It was decent, but kindof bland. I really should have used more leaves. I made it to have with soymilk and agave (the pregnancy weight gain has slowed down, so I’m sneaking in calories with tea now)… which only diluted the tea flavor further… Next time: more tea leaves and maybe a longer brewing.

thank you Shelley_Lorraine for sending me this decaf.

i drank it very peacefully, and with no excitement. and calmly read some Teen Wolf fic my sister recommended. and then we shared beans and toast and she drank the tea pot with me. very calmly and warming. because it’s DECAF. and i have enthusiasm for getting to try this nice adagio evening option, but no excitement for it. cuz it’s DECAF you see. decaf.
i will very likely try some of the other decafs adagio has to offer too.

Definitely not the best Ceylon, but I’ve been pretty desperate for an unflavored, decaffeinated black tea. Sometimes I just want TEA, not an herbal blend, but I can’t take caffeine after about 3pm.

I’m currently drinking this while working on a paper for my pastry class. I decided to write about scones, and I might be working a little tea into it as well. :) (But great googley-moogley, I would love a scone right about now.)

Drinking this tea has granted me a new self-insight: with little doubt, there isn’t a single decaffeinated tea in the world that I can drink without finding it offensive, vile, and completely unwholesome. Before this experience, whenever I was served decaf tea, I rationalized away its awfulness with excuses: surely I couldn’t expect any better out of a teabag, surely the person who made this just didn’t follow the correct parameters, etc. Eventually, I bought this tea to prove to myself that a decent cuppa decaf can be made. After all, Adagio wouldn’t dare sell a bad tea alongside all its other, high quality offerings, right? I was subsequently yanked into reality with not just one, but seven cups of torture. I’m probably a latent masochist. But thus, I faced the hard cold truth: it’s impossible to enjoy a decent cup of tea late at night without consequence to my sleep.

This tea’s offensiveness won’t be immediately obvious if you just inspect the dry leaf. Compared with an unadulterated Ceylon (OP from Kennilworth Estate), there’s actually little visual difference. However, while the normal Ceylon is piney and citrusy, the Decaf ceylon offers only a faint note of hay.

Brewing this tea yields an impressively dark liquor. I’ve only ever seen pu’ers this dark. There’s a vague tanginess to the aroma, but not much else. Sipping it reveals a medium body and astringency, so you do get some of the feeling of drinking real tea. But that’s where the similarities end.

The marketing copy for this tea claims that there’s “sweet citrus notes like mandarin”, but believe me, there’s nothing of the sort here. My first impression is that I’m drinking hot rusty water. Upon further searching and slurping I find a messy handful of stinky grass with one or two stalks of fragrant hay. There’s something like a faint burp of caramel chew from a previous meal. It gives false hope for something interesting that may be brought out with milk, but upon the addition of milk, there’s only a second distant burp of caramel chew that is just as fleeting.

Given the choice between this and hot water, I’d go for the hot water.

I’ve had this a number of times, so I’ll be compiling my experiences into a note.

The leaves, if you can call them that, are small and crumpled. They unfold to reveal low-grade tea. The leaves smell malty and bland.

Astringency and bitterness are well-controlled in this tea.

I’m normally all for complex descriptions using traditionally wine-based language, but this tea really doesn’t lend itself to that. The flavor is decently strong, fortunately, but it is extremely boring. There’s just some maltiness and what I’d describe as “tea” flavor. It reminds me of a bagged decaf, but stronger.

Since I have 4 oz of this, I’ve taken to mixing it with other teas. Mixed with Harney’s Vanilla Comorro or Decaf Paris, it helps to mellow out the, in my opinion, slightly overdone flavorings of those teas. That said, those are both far superior to this tea, the Vanilla Comorro especially.

Edit: I’ve been using this for cold-brew tea, and it works quite well. It’s smooth and orange-scented with some sweetness.

Very boring and bland. I made it strong, and I still wasn’t impressed by the flavor. I’m giving up on decaf black teas. I have yet to find one flavorful enough for me.

This tea is a nice alternative to the standard decaf bagged tea. It is smooth, not bitter, and is just a nice tea when herbals just won’t do.

This was a nice decaf black tea. Not quite as strong as I’d like, but I’m sure that could be fixed by adding more tea. Had a surprising bit of sweetness to it.