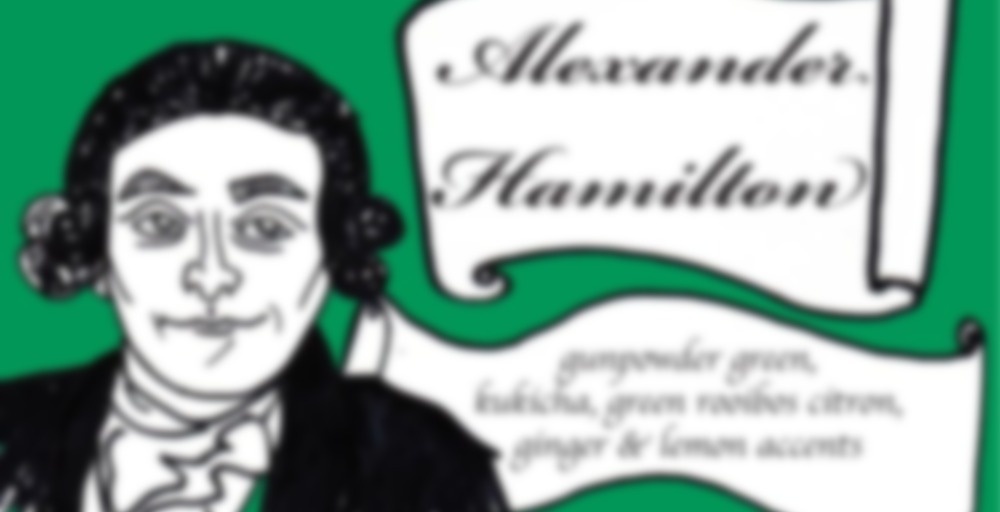 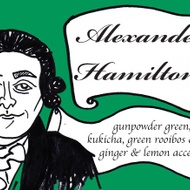 by Adagio Custom Blends
--
You

Enterprising Alexander Hamilton was young during the American Revolution, but hardworking and shrewd, serving General Washington both on the front and in his presidential cabinet. His life was cut short when he was shot and killed in a duel. His impact remains however, an avid supporter of the National Bank, Hamilton’s tea is as green as the money within its walls, thanks to smoky, earthy gunpowder. Sour, fruity green kukicha stands in for his strong opinions, and the telltale spark of his personality is balanced with a touch of green rooibos citron and a little blaze of ginger and lemon accents.

My brother got a sample of this blend before me, and I was lucky enough to get a taste when we celebrated the 4th of July. Hamilton is a hardworking and shrewd character of the American Revolution. Opinionated, smart, and younger than most involved in the cause, his tea is blazing with ginger and lemon when smelled in the bag. Brewed, the strong sweet-vegetal notes of kukicha are more present and balanced with the smoky but very drinkable gunpowder. (Did I mention Hamilton was killed in a duel?). An avid supporter of the National Bank, Hamilton’s tea is as green as the money within its walls. There’s a touch of green rooibos citron to add a sweet-sour lemon finish. Iced or hot this is a delectable green blend. If you need some more Hamilton, tune in for some later episodes of HBO’s John Adams miniseries. Not as sassy as Rutledge, Hamilton’s sarcasm and snappy comebacks are unparalleled.