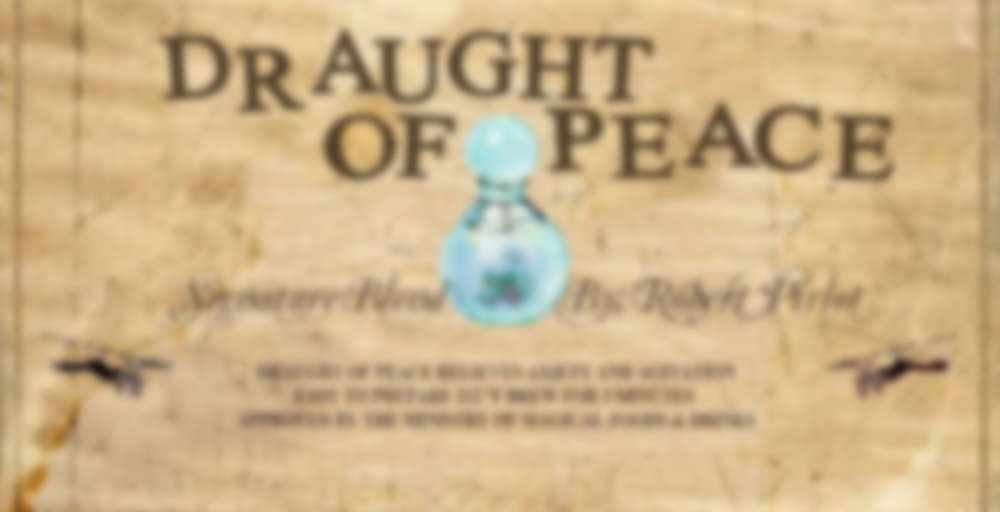 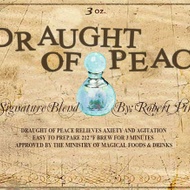 by Adagio Custom Blends
71
You

The Draught of Peace is a potion which relieves anxiety and agitation. Its ingredients are powdered moonstone, syrup of hellebore, powdered porcupine quills, Valerian root, and powdered unicorn horn. It should be a turquoise blue when finished and simmered before being drunk. It is ironically a difficult potion to make, requiring that the brewer follow the directions carefully, because making a mistake can have drastic consequences. Adding too much of the ingredients, for instance, will put the drinker of the potion into a deep – and possibly irreversible – sleep.

I’m drinking this because of the name more than any desire to actually drink it. It’s not bad, but I always struggle with deciding how to drink this one. Black, the apricot and vanilla come through beautifully and are actually quite delicious in the initial sip, but then the black tea base comes and overpowers them and sits heavy on your tongue. I find that a lot of the adagio blends suffer because of the black tea base they use. Typically, I add milk to temper the heaviness and the astringency of that base, and I did that this morning too. The problem is that the delicate apricot and vanilla don’t really put up much of a fight against the milk, and as soon as a drop is added they fade into the background. With milk, this is a very cloying cream-heavy blend, with just a hint of apricot at the end of the sip. If only the Adagio fandom blends used a higher quality black tea base – or even (gasp) offered more than one base – this could have been really, really nice.

Yeah 70 years today. We have lost many of these heroes.

Too many. It’s humbling to think about.

Agreed, they are a vanishing generation of heroes. Many are forgotten for their efforts.

Yes, you tend to only hear about a select few, but all were heroes in my eyes. The two minute silence yesterday was very emotional.

Indeed and i was observed here as well.

Another from the Magic Potions sampler, and another confusing name. Draught of Peace, to me, would absolutely have to be a caffeine free blend – probably something with valerian, or chamomile at least. This one’s on a black base, which is never going to put me into a deep – or irreversible – sleep…or any kind of sleep at all, if we’re honest. I like the flavour idea – apricot, cream, vanilla – but surely there’s a more appropriate name to be found somewhere in the HP universe?

I’m drinking today’s cup hot, although I think this would potentially be excellent either iced or cold brewed – something to try when I finally get around to sipping down some of these challenge teas, rather than accumulating!

I tried Adagio’s Cream ages ago, and didn’t much like it – I found it too cloying and heavy for my tastes. In a blend with other flavours, though, it’s pretty magical. This one is rich, and super-desserty, and I wouldn’t necessarily want a huge cup. The combination of cream and vanilla is very sweet and decadent, with a definite dairy quality. It reminds me a little of melted ice cream, although obviously without the texture/temperature differential. The “apricot” is a little more muted than I expected, although what’s there tastes more to me like peach. Either way, it makes for a nice stone-fruity pairing with the other flavours, although I wish it were more prominent. My one complaint is that it doesn’t add much in the way of contrast – all of the flavours here are sweet, and together they’re almost OTT.

As with many of the flavoured black blends from Adagio, the base tea here becomes a little bitter/astringent, even with a relatively short steep time. It’s more noticable to me when it’s piping hot, but it seems to settle down a bit as it starts to cool. I’m wondering whether milk would help here, or whether it would drown the apricot/peach completely – something else to try, I guess!

I like this one, although the mismatched name irritates me. Surely someone creating fandom teas – which likely arises from a passion for the thing itself – would have more concern for something like that? Why bother, otherwise? Setting that aside, though, this is a decent flavoured tea and one I’ll doubtless return to for future experiments.

This one was yummy! It tasted like a creamy black tea. Lots of vanilla and some kind of nondescript tart fruit taste. Not like a masterpiece or anything, but definitely drinkable and accessible.

Found it kind of odd that this was a black tea; I would think that the Draught of Peace would be a chamomile base… Just my opinion.

I’m thinking that most of the custom Adagio tea I have are just OK – and that’s true of this one too. Not bad, not great just ok.
I’m not getting much strawberry – more stone fruit (apricot), vanilla, cream.
I’m happy to have bought the set, and is fun to try the custom blends, the tins are so cute, but the tea is more of a novelty than great tea.

Thanks to Dexter for sending some awesome Harry Potter tea samples my way.

This one is pretty tasty, but ultimately too rich for me. The creaminess seems subtle at first, and really sneaks up to create the richness in addition to the apricot here. However, a real upside is that the black base I’m not a fan of from Adagio isn’t really all that offensive or noticeable.

Thank you Dexter for the sample! I decided I’d cold brew one of these guys for work to get in an easy sipdown but I didn’t have my laptop on hand so I picked based on what I thought they were flavoured using smell as a reference. This one smelled fruity and a lot of the others had mint or spice smells to them so this was the front runner.

So keep in mind I had no clue what was actually in this one but taste wise when I was drinking this I got strawberries and cream, and maybe raspberries. Well, apparently this one does have a strong cream element in it but the fruit is apricot. Huh. I guess maybe I see that? I think I’d definitely have to try it again to confirm that though.

As a “Strawberry” Cream tea I thought this was solidly good though; not great or mindblowing, but fun because of the fandom and not awful tasting. Not sure how I feel about it now that I know I was tasting apricot. I mean, it still tasted good but obviously it wasn’t distinctly apricot flavoured.

This is one of the Harry Potter teas I requested from Dexter and while I like it, I don’t find it is amazing. It’s just nice, pleasant, non-offensive, etc. I can’t really make out that much of the individual flavours much. Maybe it will be better as a cold steep?

Thank you Nattie for sending some of this my way. It is nice but not something I would want a whole 3 oz of as the base is quite prominent. There is a hint of vanilla and a nice peach flavor as well but nothing particularly special. Still, I am grateful for the chance to try it!

Decided to give this one a try iced and sweetened. It turned out great. Definitely has some strong flavor. I taste more apricot than anything… though it does taste slightly more like peach than apricot to me, but there is definitely a creamy vanilla quality to this tea.

Definitely don’t think I’d like this one hot and unsweetened, but it’s a nice sweet ice tea. I’d drink it again.

I do have to say though that this blend confuses the crap out of me… i mean given it’s name and its purpose in the harry potter universe you’d think it would be an caffeine-free tea or decaf at the least. None of these flavors have anything to do with the namesake potion.

time to catch up on yesterdays teas! We went out last night to a friends for board games and didn’t get home until about 6 hours ago, so i had no time for tea notes :) Dexter sent this one to me as a surprise with a few other of the potions teas from Adagio. This one is labelled as apricot, cream and vanilla. Sadly, i was getting mostly a peach sort of flavour, which is most assuredly NOT apricot. All that being said though, it was a nice cup of peach vanilla tea, and while i’ve been “off” of most peach teas lately, this one didn’t trigger any “omg no no no no no peach!” feelings from me this round :) Thanks dexter!

Funnily enough, we hadn’t even thought of that…but yes it occurred to us afterwards haha