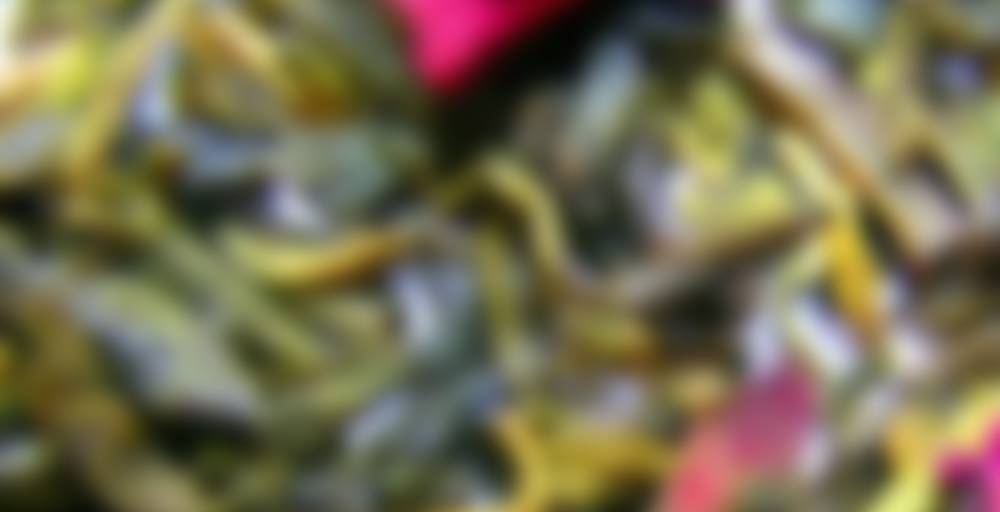 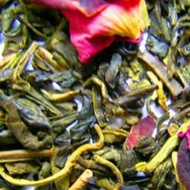 Green tea from China flavoured with orange and strawberry. Delicious as iced tea.

Since my ‘woe, I’m dying horribly’ post earlier today I’ve been to the pharmacists and have eaten something fever-reducing so I’m going to cautiously try my hand (or tongue) on one of these new teas that I just picked up from the post office today (conveniently placed right next to the pharmacy). What torture, having new teas and not really being able to taste them properly due to permanently odd flavour in mouth.

But now, being medicated, this seems to have diminished a lot, so I’m giving it a go. Also I’m very curious about this one. What we’ve got here is a green tea strawberry and orange. I’ve already got a green tea with strawberry but the addition of orange really intrigued me.

The aroma is very fruity with the orange clearly running the show, both in the dry leaf and the steeped cup. Dry, it smells almost like fruit concentrate, the sort you dilute with water before drinking. Steeped, the strawberry peeks out as well, but it’s largely just orange.

What’s surprising about this is that when I actually taste it, it tastes very green. Judging from the strength of the fruit in the aroma I would have imagined the green tea to be completely overwhelmed by the fruit here, but it’s really surprisingly harmonic.

It’s still heavily orange, though, orange dominant over strawberry, but there’s just enough of it to make it a nice green tea rather than a round of warm cordial.

I’m quite pleased with this. I don’t know if, in the future, I would keep this one around as well as the green strawberry from Kusmi. Probably not. I just haven’t decided yet which of the two I’d be more likely to choose to stock up on, if any. (One thing is a really good tea. But just because it’s a really good tea doesn’t necessarily mean that it has the longevity to keep it around indefinitely.)

And yeah, the funny side note? Not noticable at this time.

Thank you, Angrboda, for this lovely tea from our swap so many months ago… I finally had the chance to sit and enjoy it this afternoon.

This tea smells gently of strawberry hard candy, with a slight scent of leaves, presumably from the green tea. I didn’t want to risk bitterness as I only had a small sample, so I steeped it lightly, and it turns out that it was the right approach for me.

Together with the orange, the strawberry actually presents more as a gentle, non-acidic pineapple flavor. It’s sweet, yet not overly so. The green is a great choice for countering the sweetness. Other than that, the green tea is unremarkable, but it doesn’t need to be anything more than a crisp base for delivering a pleasantly sweet afternoon tea.

So for my very first attempt with this tea, I (gasp) followed the instructions against both my better judgment and Angrboda’s recommendation. There are at least two more brews to get out of this sample, so it seemed like a good place to start.

Following the instructions in this case, resulted in an 80C-steep for a whopping 8 minutes. Yes, eight. And yes. This is bitter, but far from as bitter as expected. What is less appealing is the metallic taste that sometimes seems so hard to avoid in ACP’s greens – but it evaporates once the brew cools off a little.

But I get ahead of myself a little – the dry tea smells very pleasant, there’s a nice balance between the orange and the strawberry, but the fruit notes are a little too candy-esque for me and my devotion to natural fruit flavours.

But yeah – next time this will need to steep for a shorter time, because right now this tea is half bitter and half fruit candy; two main flavour features that don’t marry particularly well.

…Strawberry and green tea.
I always get the UGH feeling when those two meet in a mug. They kind of clash. Both ingredients has a bitterness to it. Combined they are just to much…

But I couldn’t help myself when the sweetest ekspedient let me have a whiff of this. I HAD TO HAVE IT!!!! I don’t need to drink it; Just throwing into my closet is fine. Just having it in my home like a perfume – I needed to buy it.

It’s bitter but it’s not that bad. Maybe if I steep it for a shorter time and cool it down…?
Then maybe… Just maybe, it could turn out to be one of my fave!