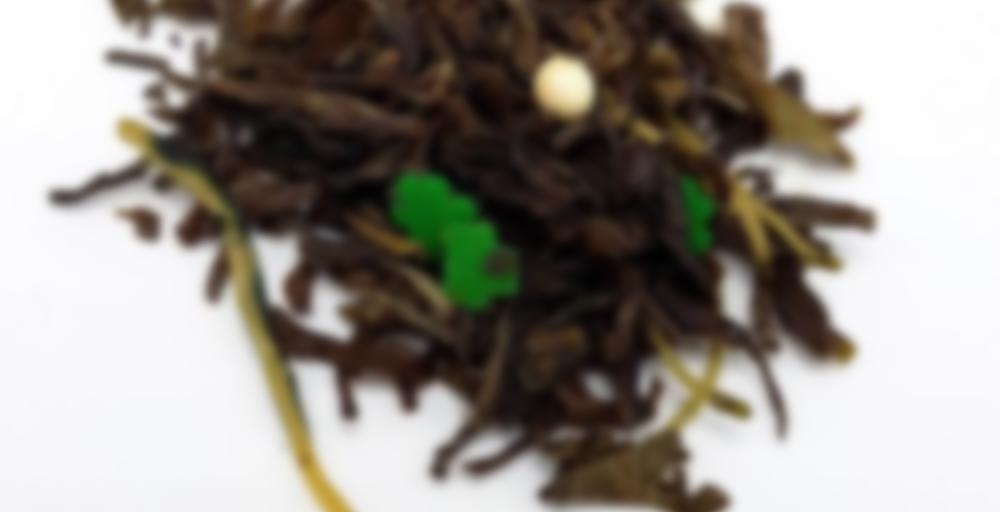 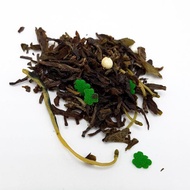 All the flavors of a creamy potato pancake with a malty base, with a heaping helping of vanilla and honey.

I definitely agree with previous reviews that mention it tastes like honeysuckle. It definitely does. That flavor seems like it would go better with a green base rather than a Darjeeling. The flavoring and the tea itself seem to be fighting with each other.

I really really enjoyed this one. There’s that signature A Quarter to Tea flavour going on here, but just enough of it, not too much, not too little. I’ve had others from QTT in which the honey flavour was just too in your face overwhelming and it took till the 3rd steep until it was bearable, but here, perfect. Lovely base. To me, this one is a winner. Well done.

Thank you for sharing this one with me, VariaTEA.

this was a weird one. hot i was ok with it…and then the more it cooled the more it tasted “not what i want” i think it’s the honeysuckle? maybe not sure. Either way…this is a drink hot for me..cooled it doesn’t work even though the flavourings here should be something i want.

I made this while drinking White Christmas by 52 Teas. I gave it to a family friend to try and he swears they taste the same. They don’t but he’s just discovering tea so it’s fun to see the difference in palates (sp?). I definitely get the vanilla honey. The potato pancake is more faint though. Also, I’m starting to think there is a distinct A Quarter to Tea taste to her teas. I actually think I could blindly guess the tea company before I could guess the tea title. I don’t know what that distinct flavor is and I don’t think this is a bad thing, just something I observed.

Totally agree with you on being able to identify the blender by some mysterious flavour. I’ve felt the same about Butiki, 52teas, and (though my experience was limited) Bluebird.

I’m glad someone understands because I was writing this and thought “this makes no sense” and yet there really is a distinct flavor.

In a rough place right now…

Yesterday was my day off, so I decided that I’d make some tea and head down to the mall to surprise my boyfriend with a visit. I haven’t really done that in a long time, and I thought it would be a nice/sweet thing to do since this week has been… hard.

I even picked this tea specifically because of its Irish inspiration. I thought it would be a nice tea to share with him, seeing as he’s Irish and very proud of his heritage. I made it with milk and sugar, just like he takes it too..

I don’t think it’s worth going into all of the details, but it was a BAD afternoon. I mean, it’s been a stressful month. He’s very close to 50 days of straight work, with out any days off AT ALL, between two jobs. Gradually, the higher than number count has gotten, he’s become more distant, and less affectionate. This last week, he’s just bee flat out mean. To everyone – and its come off in a way where he almost seems proud of it. It’s just been grating, trying to be this positive force and supportive when I’m only met with sarcasm, and cruel remarks. Insults every time I wear anything Halloween related (my favourite holiday, his least), being flat out told that there was no way I was going to be able to pull off the cosplay I have planned for comic con, told that the colour I dyed my hair looked awful on me…

So anyway, on his lunch break I went shopping with him and he kept asking my opinion on the clothing he was looking at. “Does this print look good?” “What colour do you like?” “Which gloves would look good with my coat?” Every time I gave an opinion he’d tell me it was wrong, or that I had no taste in men’s fashion. Or just glare at me, as if I was an idiot for what I was thinking. It was finally just too much, and despite my best efforts I felt several tears roll down my cheek.

After that he just kept pressing me over and over to tell him what was wrong, and finally I just buckled and told him that while I’ve never had an issue with sarcastic banter or the occasional snide remark (I think some of the strongest relationships are built around that sort of playful/sarcastic teasing form of flirtation) that it stops being fun/playful when it goes on for over a week, without any sort of compassion/affectionate actions inbetween to balance it out. That I wasn’t mad at him, but that I felt broken, beaten down, and just… like he resented me.

After that I just stood at his desk for an hour and just silently cried, while he said nothing/wouldn’t make eye contact with me. A few times I asked if he wanted me to leave, and he just nodded his head no. So I stayed, and I felt foolish for the tears streaming down my face. Finally, when he got off work, we went and walked to his bus stop, and he broke up with me.

And now I just feel… lost.

All evening I tried to figure out exactly at what point things changed for him, if it was my fault or if it was just inevitable. If I’m being honest with myself, I’m not upset that the relationship is over. I think, deep down, I’ve felt that is has been for weeks. I think what I’ve been clinging to, and what I’m mourning the loss of, is losing any sort of relationship with him. I’ve never ever been able to successfully remain friends with someone after breaking up with them, but he was the first person that I deeply believed that would be possible with and who I wanted to try to maintain a friendship with.

Except that’s not what he wants. He’s made that clear. And that hurts. So much.

One thing I guess I’m certain about is that I’m happy this was a sipdown. I don’t know that I could handle holding onto this tea. I just know it’s the tea I’m always going to associate with this breakup. And I doubt I could relive that every time I drink it.

Oh no, Roswell, I am so sorry it ended like this and that he had been treating you so awfully for that long already. Work can be stressful but that is still never an excuse. Be good to yourself.

I’m so sorry! I know it won’t feel like it now but truly it is for the best in the long run. You deserve someone who will treat you so much better than that. Sending my love.

Oh Roswell, I’m so sorry. Things will probably be rough for a while, which sucks. I second Fjellrev, be kind to yourself. One step at a time, and a lot, lot, lot of tea.

I am sending you big hugs through cyberspace. Be very kind to yourself.

One of these days, you are going to meet someone who sees your awesomeness.

It sounds like this breakup was all about him. Definitely not about you! That boy has some growing up to do (we all do, I am sure, I’m just sad it came down on you in this awful way). Hugs if you want them xo

Ros, just take a step back and catch your breath. I know it is hard but sometimes things happen to lead you in another direction. Let nothing hold you down from what you can do.

Oh man, so sorry to hear. Work related stress is tough but that’s no excuse to mistreat someone. I hope he comes to his senses and apologies. Keep your head up..

So I must admit that i got this one because it is supposed to be flavored like Irish potato pancakes- and I have never yet met a potato anything that i didn’t LOVE! so this tea…- it’s interesting, The aftertaste is surprisingly like a potato pancake, so I am amazed that this tea totally lives up to that claim… I also taste the honey, but I can’t seem to taste the vanilla. Although it’s quite an unusual tea, I kind of like it- not the kind I would reach for typically, but it is unique enough that I can see myself having this when a certain mood arises..