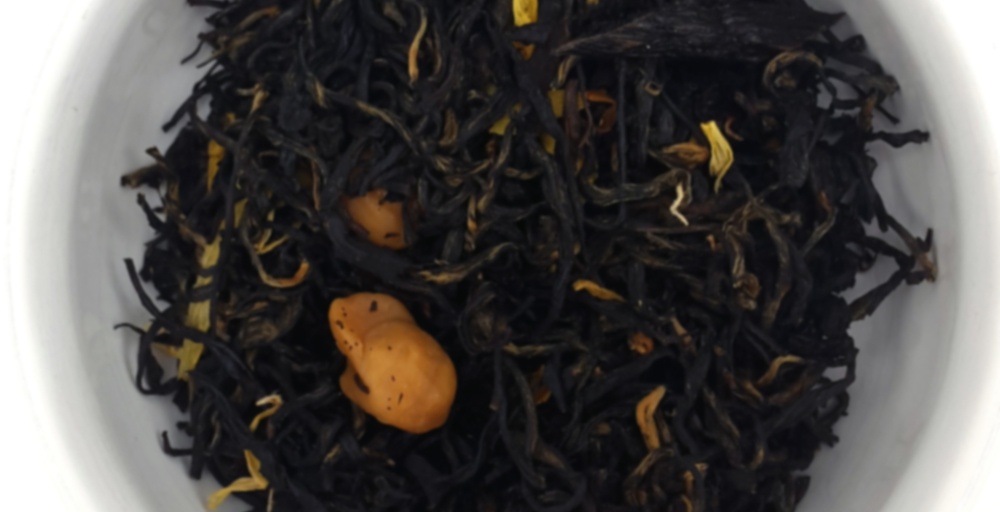 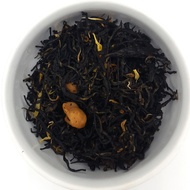 The creamy sweetness of caramel and bavarian cream pairs with the richness of chestnuts and keemun for a cup that’s full of holiday cheer.

I didn’t drink this recently, but just came across the empty bag, and still remember enough to post about it! This was an absolutely delicious tea – sweet, nutty, rich. It was absolutely heavenly. I wish I’d had more, but I did seem to acquire a considerable portion of someone else’s (VariaTEA, I’m thinking it was you? Thanks!) so I had at least 3 cups of this, which were all stellar.

Would love if this tea came back at some point! It’s from the days before I knew about AQ2T, sadly. (Or maybe it was my unofficial online tea purchasing hiatus.)

This is just glorious, both the scent and the flavour. Caramel with some cream backup and just a lovely base. The chestnut for me is totally missing in action, but it doesn’t matter.

Thank you, Daylon R. Thomas. I am really enjoying this.

I had a strong feeling you’d like that one :)

Clearly, you were very much right.

You may be stuck with me for life now. :)

Urban Tumbler Test and it is really good this time. I used generous portions of this tea. My tumbler is for 15-16 ounces of water, so I would estimate that I put two heaping tablespoons of the tea in it. And I brewed it two times: first being 15 ounces, the latter closer to 9 or 10. The last one I might make into a 4 or 5 since I can taste the flavor leftover strongly at the bottom.

After I spent a huge portion of leaves for liquid motivation going to work, I get the chestnut more after 3 minutes to five. Then it vanishes into the concurrent caramel taste with a strong creaminess coming in. A little bit buttery, but more caramelized and candy like. After a while, it essentially tastes like butterscotch. No fancy note talking, jut straight up butterscotch. The leaves remained in the water the entire time. The same with the second steep at 9-10 ounces, 180-190 degrees.

I really, really liked this tea and could see myself getting more of it. The only thing I think it needs is more chestnut like Sil. I also continue to think this would not do badly for a chocolate tea. The tea remained light overall, but I’m personally thankful for that since I love lighter black teas. Some people actually found this tea bitter which I can see with less water. I did use 15 ounces which is a lot. It might have been bitter for me if I had more leaves too. How much water and leaves you want to use is more up to you, the reader and maybe drinker. I can accurately claim, however, that this tea is for butterscotch lovers and people who drink lighter teas.

Also, I was actually pretty close to giving this a 90. I’ve just been spoiled by Lauren’s other awesome teas. I hope she makes more like this one in the future.

This is the second tea from A Quarter to Tea that I have tried so far. This was a sample, whereas the other was a regular bag. At first sip, I was like, “oh no, it’s a bit astringent…I should have added milk as I had originally thought to” but then as it cooled a little, I got a really smooth and warm caramel tea. It almost reminded me of Butiki’s Caramel Vanilla Assam, only the chestnut was a bit warmer with the caramel than the vanilla. I’ve got just one serving left, so I might try a wee bit with milk to see how it holds up, before adding it to the whole brew. I worry it might overpower this milder tea, but on the other hand, it might make this more decadent. Wishing I hadn’t waited so long to order, as this is pretty much gone now.

This tea smells SO good…like some kind of rich, cream-filled pastry. The flavor is heavy on the cream and caramel with just a hint of chestnut coming through. My only complaint is that the base tea is slightly bitter, which messes with the rich sweetness of the caramel. I may have to break down and try some sweetener in this one!

So sad that no one owns this tea on steepster, nor has it been reviewed. Thanks to the post office these took a long time to get here, through NO fault of Lauren’s. She’s awesome, so there. :) We decided in February to get back on track with being healthy and are working our way through a “reset” on the food front as well as weekly exercise goals. My toher half is doing something like 200km in a week of cycling and I’m trying to do a workout every day and yoga every other day in addition to work on flexibility.

What does all this have to do with the tea? Well I am currently not 100% and after a week of this reset (with a week to go) i just want all the bready, sweet delicious things i can’t have. So i made this tea today hoping it would help with the cravings.

First off, it smells AMAAAAZING. Chestnut, creamy, caramel..so insanely decadent. Brewed, it’s a great blend. You can still taste the base tea, but in addition it’s this creamy, caramel tea. The chestnut is a little weak, but it comes through at the end to sort of tie it all together. I would seriously consider picking up more of this even with the crappy dollar. noms.

I am so looking forward to my taste buds coming back.