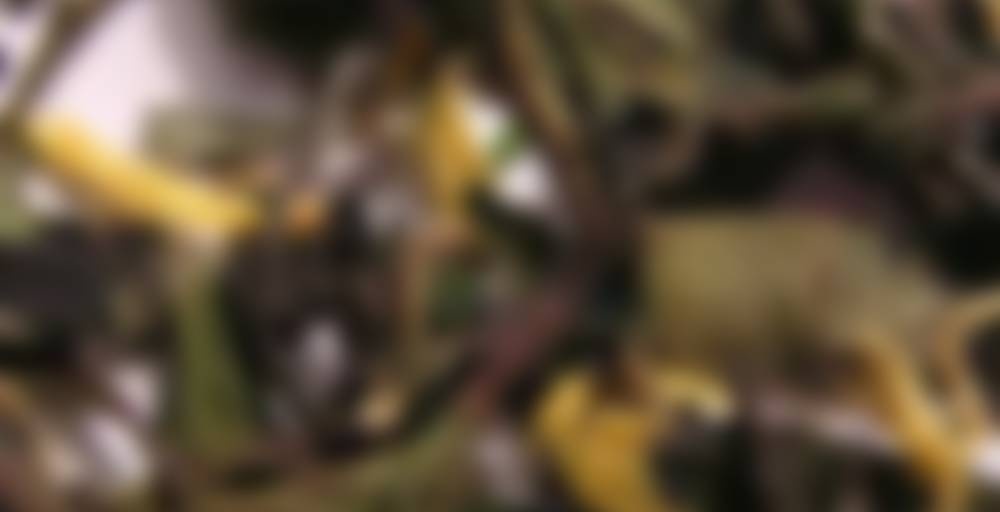 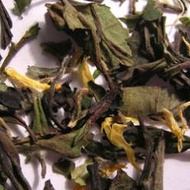 Green Japanese sencha and bancha tea with papaya, mango, pineapple, rosebuds and bamboo. Can be served cold as an ice tea as well. Temperature 70-80 C for 7 minutes

Uhm, nom. This smells delicious in the bag, like a bamboo caramel fruit cup (although I have a feeling that particular flavour combination wouldn’t exactly fly out of the fruit cup aisle).

I kind of adore this, although I steeped it very sloppily, so it might just be a happy mistake. I mainly get bamboo and pineapple – a big, bold, juicy mid-mouth bamboo-pineapple, no drably elusive aftertaste phantasm.

Now I really want to try this iced. And also see if I can tease a few more fruit notes out of it with a longer steeping time.

What does bamboo taste like? I’ve never had bamboo tea, sounds interesting.

If I tell you, you might become a target for the GPC (Global Panda Coalition), but as long as you’re aware of the risks involved…

It’s a crisp white-green flavour, much like a bite out of canned bamboo shoots, if you imagine them greener and more vegetal.

@CK you can try fresh bamboo shoots in some asian restaurants. have you ever cut down bamboo? there’s a bitterness that comes with cutting that ISN’T in the taste, but if you snip a twiggy little branch you get a very light, fresh, sweet smell that’s wood but not wood? is that perfectly unclear? lol

Thanks guys, good descriptions. I’ve only ever eaten bamboo shoots in dishes that were already seasoned shoyu so not a clue what they taste like otherwise. I will be on the lookout and then I may grasp JustJames’ wood but not wood, lol :)

As long as you ask him before grasping his wood-but-not-wood. Consent culture FTW.

@Anna BUWAHAHAHAHAHAHAHA!!!!! a dirty mind is a terrible thing to waste, or so i’ve heard. ;-D

This tea is so delicious! The taste of bamboo.. Nom. Mums

So December 14th was a green blend which we didn’t have yesterday because we had a lot of mulled wine and all round Christmas cheer instead with decorating the tree and whatnot. So there just wasn’t ‘space’ for a distinctly summer-y sounding blend.

Summer-y or not, though, this was one of those that I want to find in a product such as this calendar. Something that wouldn’t have caught my eye otherwise but that I might find interesting when tasting it. In other words, not something that I know I won’t like much.

It smells like sweeties when steeped. It’s a very fruity blend with dried fruit bits in (tropical) and large rose petals. Smells like winegums. This of course made me interested!

Unfortunately it doesn’t taste like sweeties. It tastes like… like… like… I’m not sure. I can taste the tropical fruits, pineapple in particular but also something else that I don’t really think I like much. It’s a quite grassy sort of flavour, which leads me to think about the bamboo. I’ve had bamboo in blends before and actually rather enjoyed it, so I don’t think it’s the bamboo alone that does it here. I think it’s more a question of, for me, the bamboo simply doesn’t play well with some of the other ingredients. The rose petals is giving it a fairly floral finish as well, which I’m not keen on either.

Another miss for me, then, but I’m quite pleased that it wasn’t a known dislike before I even tasted it!

As for today’s tea, I’m having a bit of a think about it. I’ve decided that in order to prevent things lying around for ages untasted, I must drink these in order. Today’s box however contained two satchets of their green mandarin blend, which I’ve already got loads of in a tin. So, is it okay to put those two satchets with the tin, or must they still be used before I can have tomorrow’s tea? Answers on a postcard, please. (To be frank, my decision will probably hinge on what tomorrow’s tea actually is)

Do you like the green mandarin blend? If so, put the sachets with the tin. Do you dislike it? Drink them. :D

I like it, but not like like it. It’s quite nice, but not something I’m in the mood for often, largely because of the green base. I decided to put them with the tin in the end.