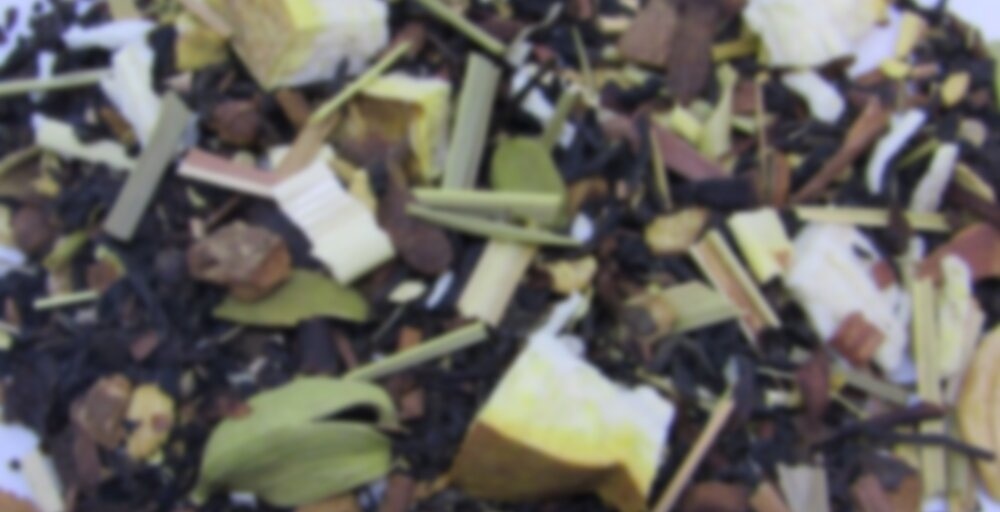 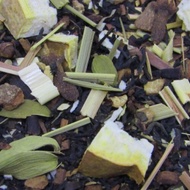 This chai begins with a blend of Assam teas (including some finely chopped CTC Assam teas) for their rich, malty & bold character. I wanted something substantial to hold up to the other flavors that would be incorporated into this chai. I also added a small amount of honeybush to round out the flavors. Then I added heaps of spices: including cinnamon, ginger, cardamom, black pepper, clove, nutmeg & chicory – plus some vanilla bean & lemongrass to enhance the cheesecake essence & finally, a bunch of freeze-dried pumpkin chunks – because pumpkin!

Sounds like a lot – but did you expect less with a name like Pumpkin Cheesecake Chai? These flavors work together really well. Rich black tea; smooth, creamy cheesecake notes that offer both sweet & tangy notes; plenty of spice (I love how the chicory adds a lovely roasted note to the overall cup); & a plentiful pumpkin-y taste.

to brew: shake the pouch – this blend has a bunch of ingredients & it’s important to make sure those ingredients are well incorporated when you start measuring! use 3 ½ grams of tea blend to 12oz of nearly boiling water (205°F) & steep for 3 minutes. strain & allow to cool for at least 10 minutes before you start sipping.

I do recommend a wee bit of sugar to the brewed tea to enhance the spice notes. The sugar will encourage the cheesecake & pumpkin notes to pop.

Happy Thanksgiving to everyone celebrating today! (and a happy last Thursday of November to all us us who aren’t. November speeds by so quickly.) I’m thankful of all the amazing people in this little community – you all rock. :)

While I’m not doing anything special today, I thought it’d be fun to try to “recreate” a Thanksgiving dinner via tea sipdowns. Except it seems I’m starting with dessert (typical). I’ll probably end it with dessert too, if I actually end up drinking up more than one tea (unlikely).

I was initially a little conflicted with this tea, but then remembered that with the pre-Anne 52teas I used to understeep them for preferred results – especially the “cheesecake black teas”. Change the steep time to 2min30s @ 205F and magic! My tea now contains all the smooth tangy cheesecake notes I desire without a good portion of the tannins and bitters from tea and spicea (cheesecake is still subtle but something my brain consistently reads as cheesecake; mileage may vary though). It doesn’t need milk like this; it already tastes creamy, with an assortment of spices. It’s a pretty good way to finish this one off!

Steep Count: 3 (all around 3min and all quite good).

I tend to understeep all black teas too: lower temperature and fast-ish. I do probably use more leaf too as I measure using a heaping DT’s perfect spoon, which is likely designed for tea which contains heaps of non-tea.

My leaf measuring varies so much from cup to cup… This cup, I think, was slightly underleafed. XD

That’s a good theory about DT’s “perfect spoon” (I always thought it was a ploy to work through more tea quickly).

I think both are true. I used to be quite frugal with leaf, but now the norm for me is a heaping DT’s perfect spoon and fast cool steeps. Why do you underleaf and why does it vary?

I sometimes overleaf too, and it all pretty much amounts to laissez-faire measuring practices (what I “feel” looks right). It often depends on the tea company (52teas I usually underleaf because I don’t want too much flavour; this dates back to “old 52teas” preferences), the tea type (leaf size, fruit pieces), or whether or not I want a milk cup or not (milk gets more leaf).

I don’t always use a spoon to “measure out” tea leaf either. I’ve shaken it out directly from the tea package before (ex- to avoid breaking big, long leaves). I’m definitely not exact XD

Ah, that’s when I haul out my Keemun Classic to make up the difference. Or if not black, then I just overleaf to avoid having to deal with the awkward amount (or make a little tiny cup).