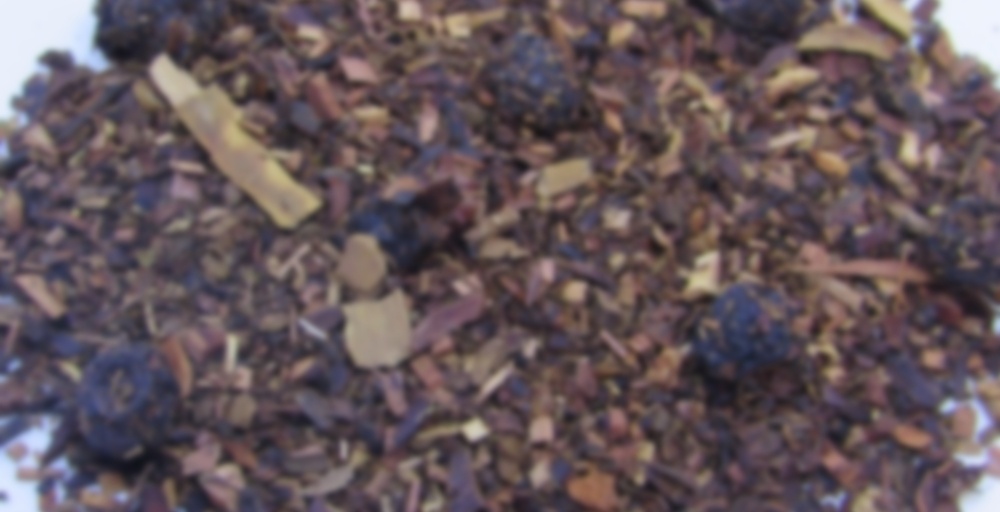 Nice! With all of the traditional holiday dessert flavors going on right now, I wanted something that was a little different & blueberry cobbler is what came to mind. Sweet blueberries, a little bit of warm spice (cinnamon & nutmeg) & a fluffy, sweet biscuit crust. One of my favorite desserts but something I don’t indulge in often (mostly because whenever I make the real thing, the cobbler never really comes out the way gramma’s used to & it makes me miss her even more.)

Really, when it comes right down to it, I’m far better at creating yummy tea flavors than I am at baking desserts.

To create this delightful dessert tea, I started with naturally caffeine-free honeybush. I thought the naturally sweet & nutty flavor of honeybush would work nicely with the other flavors. I added a bunch of blueberries, some cinnamon, nutmeg & vanilla bean as well as some essence to create a cobbler-ish kind of experience for your teacup.

Sipdown 49- 2021
This is a flavor profile that my boyfriend really loves, so he drank most of this pouch. But, I had a cup and it was quite tasty! Syrupy sweet blueberries and vanilla are most dominant for me, with just a touch of cinnamon in the finish. The honey bush works really well here, adding to the cobbler aspect of the flavor.

The last tea from my December subscription! Hooray for keeping up! \o/

This was a tasty one. A nice dark and syrupy blueberry combined with nutty pastry-esque notes from the honeybush base. To me, it’s closer to a blueberry pie since cobbler (as I think of it) is a bit more cakey. And just a hint of cinnamon adds a nice warmth and extra sweetness.

A free sampler, thanks Anne! Decided to brew this up as my herbal tea tonight, on what has become a very stressful evening! My kitchen sink is leaking, and since I don’t want to pay for “after hours” repair charges (in podunk Idaho, anything on a Sunday is “after hours”!) and I work during “normal business hours” during the rest of the week, the best I could do on the plumber front was getting an appointment early in the morning, an hour before I go into work, next Wednesday. Which means I have to deal with that sink leaking until then! (I’m no expert, but it looks to me like it only leaks when I’m running the water in the sink, so towels and a cooking pan under it will have to suffice, and I’ll have to try to severely cut down on my dishes until then… guess the next three days will be ordering in!)

I’m smelling my steeping cup, and getting warm blueberries, cinnamon, pastry, and that peppery note that I’ve been getting from honeybush a lot lately. The steeped tea tastes like a syrupy sweet blueberry, like a blueberry pancake syrup, followed by lingering spices in the mouth; the spices actually help mask the peppery note of the honeybush (or at least it seems to blend in well with them rather than standing out like several of the Plum Deluxe blends I had during advent). I rarely taste nutmeg when its included in a tea, but I taste it here! It sort of lingers on my tongue after the sip, too. The base tastes a touch nutty which I think is what is bringing out the pastry associations for me.

A pleasant cuppa on a not-so-pleasant evening!

Ugh. Sorry about your sink. Hope it’s a quick and easy fix.

I just hope it doesn’t get progressively worse over the next three days before the plumber can come out! (As a shock to no one, I wash a lot of teaware in there, heh)

Sorry about your sink – glad you enjoyed this tea! :)

Leaking sink is no fun.