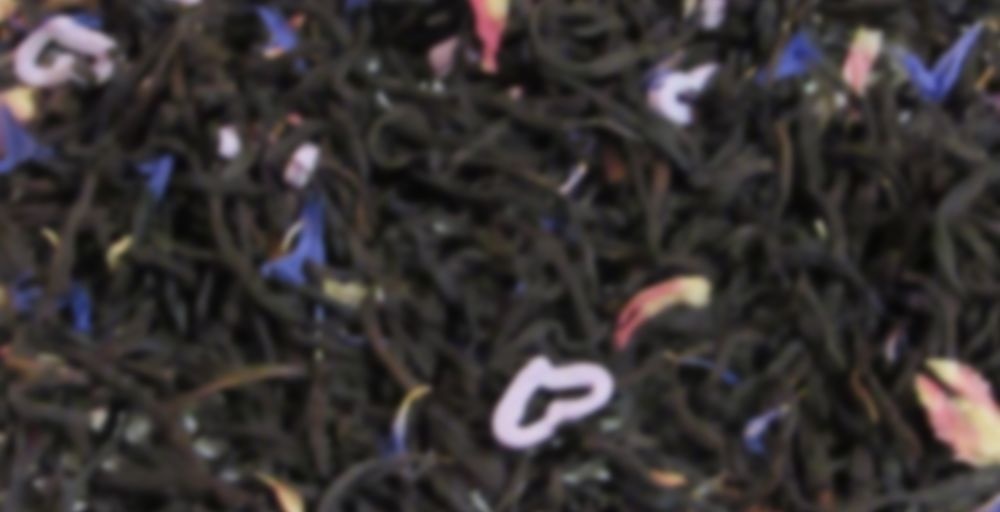 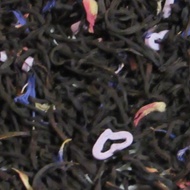 Frank originally crafted this tea back in the summer of 2012, and I thought it made a delightfully different summertime tea because I tend to radiate toward fruitier flavors for iced tea brewing – which is the majority of my tea drinking in the summer. I do drink hot tea occasionally, usually early in the morning or later at night when it’s cooler – because when it’s hot . . . it’s just too hot to drink hot tea. So you may notice that most of the teas that I tend to create this time of year tend to be those that are very ‘iced tea’ friendly.

And this one is definitely iced tea friendly!

“This week’s tea of the week is a real gem. I am enjoying a big icy stein of it as I write this. I’m sure it’s good hot too, but as an iced tea, it’s amazing. A friend of the family is over visiting and he insists it’s “like a carnival in your mouth.”

It does taste a bit ‘like a carnival in your mouth’. It’s sweet and tastes so much like cotton candy that if I didn’t know better, I’d think someone stuffed my cup full of cotton candy and then poured hot black tea over it (because even though I tend to prefer iced teas in the summer, when I conduct the taste test for the tea, I taste it hot before I brew it for iced tea – which these days means cold-brewing!)

I did tweak the recipe slightly from Frank’s 2012 version – which was the debut of his (at the time) “new” black tea blend. Instead of using a tea blend for this, I went with a single estate Ceylon. Specifically, the Petiagala estate organic OP Ceylon). For those of you who have been drinking my tea for a while now, you might recognize this particular single estate tea as the one that I utilized for the Bananas! Black tea blend -which I happened to search out specifically for the Bananas! tea . . . because that’s what Frank used in his original batch of the Bananas! tea. I really liked how well that tea complimented the banana flavor – and I hoped that it would do the same kind of thing for the cotton candy. I also tweaked it a bit by adding vegan, gluten-free/allergen-free sprinkles. (Note, the sprinkles do contain coconut oil!)

And it works remarkably well – if I do say so myself! If you don’t want to take my word for it though, you can order some and try it for yourself!

Oh – and as always, this tea IS gluten-free, allergen-free, VEGAN & organic!

For the sipdown prompt, “a tea from a small company.”

The dry leaf has a very sweet “candy grape” sort of aroma. Steeped, the flavor is more of a sweet berry note, though I do still taste a little grape toward the end of the sip. The base black tea has a slight florality coming through for me, which is likely adding to the sweetness of the tea. The flavor pops a lot more as the tea cools, as well.

The scent of this is pure candy goodness. The flavor is too! It’s so accurate and fun. I definitely prefer this one without milk and slightly overleafed. Yeah, when I brew this one just right, it really is like cotton candy. I prefer it to the DavidsTea take on this flavor.

Thank you Sil for sharing! It paired beautifully with a cotton candy cupcake. Photo: https://www.instagram.com/p/CB4APeTg5BJ/

I drank this while working and it had an awesome cotton candy sweetness with just a touch of fruitiness that comes with the treat. Yum!

There is something mildly cotton-candy-like about this black tea, right at the end of the sip. It’s also quite floral throughout. It tastes a bit of rose with a hint of strawberry too. I’ll bet it would be great iced.

Another day, another… night.

Honestly, considering the hours I post on here, you would think I was either from Australia or Europe, but no, I’m from the Eastern Time Zone, I just keep horrible hours.

Anyway, woke up with Beetlejuice: The Musical running through my head, so that meant it was time for something dark, but fun. Luckily, I just got my latest 52teas order in, and one of the grab bag teas was this, which fit the bill nicely. I don’t think I’ve ever had a cotton candy tea before, even though I used to love cotton candy. Naturally, I haven’t had cotton candy since the diagnoses (dang ’betes) so my memory of the flavor might be a bit rusty. We shall see.

The smell of the brew is sweet, with a strong black tea aroma. I can really smell the tea! I’m going in assuming I will be adding Splenda to this, but to taste it first. Taste unsweetened is… welp, it tastes like tea? If there’s cotton candy flavor in this I’m missing it. Let’s try the Splenda.

Hmm… I don’t know how much of it is the Splenda, and how much is the actual flavor of the tea, but I’m really not getting cotton candy from this. Maybe as a bit of an aftertaste? Yeah, it floats lightly on the back of my throat after I swallow, but it isn’t an in-your-face sort of flavor. I’m a bit sad. I was hoping for an upfront, kick in the teeth kind of cotton candy. It’s not bad, so to speak. It has an ok flavor and is fully drinkable. It’s just rather bland. I wonder how much of this is because this was a reblend for June and it’s now February. The flavor could be fading on it. Either way, it’s ok, but nothing spectacular.

I had a lot of mediocre cups of tea today, and unfortunately this was one of them. Not really a cotton candy flavor. More of a very, very mild strawberry candy. I found it pretty boring.

Sipdown. Well mostly, I finished this off the other day but there is still some left for variaTEA to try whenever we get a chance to get together :) I don’t love this one as far as teas go from 52 teas but that’s because it’s basically a sweet black tea. I mean in all fairness that’s kinda what cotton candy is haha. So I’m ok with the tea, but I’d rather have other flavours :)

This is our featured reblend tea for June. I cold-brewed this overnight last night to sip today – and it is fabulous!

For this blend, rather than utilize my usual black tea blend for the base, I used the OP1 Ceylon from the single estate (Petagalia) – and it’s just perfect for this flavor as it allows the gentle flavor of cotton candy to shine through without being overwhelmed. There’s a good balance between tea and flavor going on here.

(Note: you may notice that this one isn’t yet available to buy on the website. It will be added July 7)