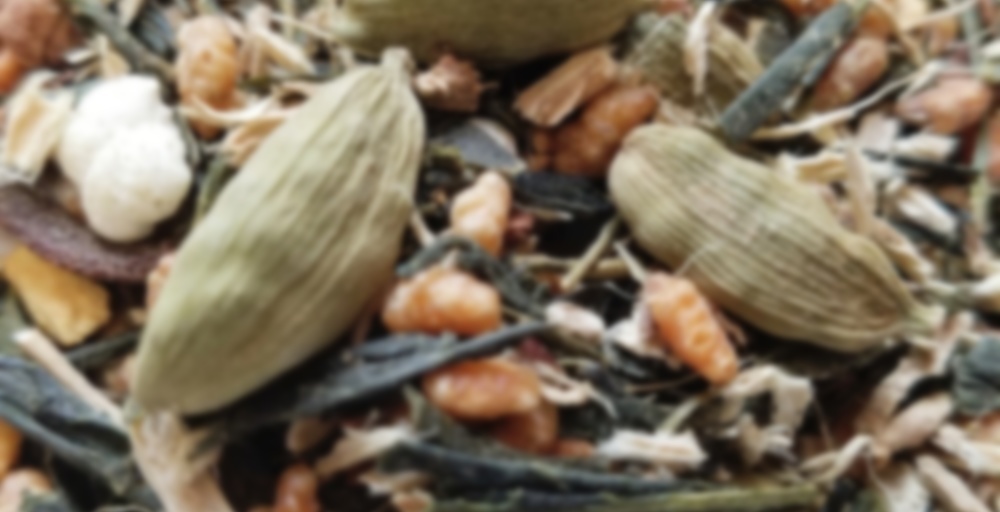 Last year around this time, I crafted a Chai blend for the Holiday box called Winter Cabin Chai – a blend that combined black teas (including some Lapsang Souchong) and masala chai spices as well as marshmallow root. My inspiration for this tea was the idea of sipping on a cuppa chai while sitting in front of a fireplace, roasting marshmallows. As I was blending this tea, I thought of the many various marshmallow teas that we’ve crafted here at 52Teas – and the Chosen One among all those marshmallow teas would have to be Marshmallow Treat Genmaicha. Then I thought – hey, why not a Chai Spice Marshmallow Treat? Wouldn’t that be tasty?

Well, of course it would!

So here we are – now a year later, and I’ve created that tea. I started with organic, matcha infused genmaicha and added marshmallow root, vanilla bean & marshmallow essence. Then I gave it the chai treatment with organic masala chai spices: cinnamon, ginger, cloves, cardamom and nutmeg.

As I sit here, sipping on a hot cuppa – I’m savoring every sip. Sweet notes of marshmallow and hints of creamy vanilla blended with masala chai spices: It’s warm but not spicy – and that warmth gradually builds on the back of your throat as you continue to sip – warming you from the inside out. Soothing and delicious.

Now, I want someone to make me a batch of Chai Spice Marshmallow Treats. :)

Sipdown. Thank you to Shae for sharing this with me. I love it, and I’m so sad it’s gone. I’ve been saving one cup worth until I could really savor it. I had my 3.5hour HR Management class last night, and I figured it would be a good time to enjoy my last cup. Such a wonderful chai- fluffy marshmallow, and a perfect blend of spices.

I need to clean up my online cupboard and actually write about the teas I have been drinking and finishing up at work. I ripped through this pouch during our cold -35C spell a few weeks ago. It was so freezing being close to an automatic door all evening day in and day out that I could barely feel my toes. So I’d fill up my Contigo twice per shift in hopes it would help.

This was nice but not as creamy or marshmallowy as I would have liked. I think my problem is I prefer spices with milk, like a traditional chai. Green tea with spice, for me, normally means I won’t add milk, so then the spices can be a little bitter. This was heavy on the cinnamon, but to be fair, chai spices works a lot better with toasty genmaicha than, say, a sencha. The rice balances things out a little more to my liking.

miss you lady! nice to see some catch up :)

Yeah! I miss you all too. I wish we all had more time for virtual tea parties haha.

I think Sil would like my packet of this since it is loaded with cardamom. It smelled so marshmallowy and though there is a fluffy sweetness it is mainly cardamom. As such I don’t think this is really for me so Sil, don’t be surprised if you find more of this in the bag of teas I’m putting aside for you.

Finished this one off this morning. Need to work on getting through some of the samples that VariaTEA gave me before we hit month end! I quite enjoy this one even though it’s a green tea…its the right balance of spices and base tea. :)

Did this have more cardamom than the last sample you had?