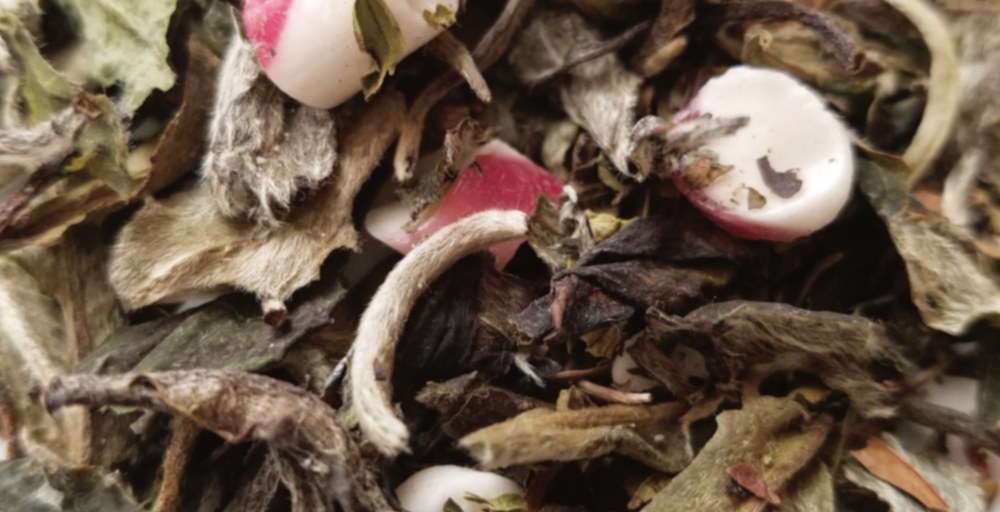 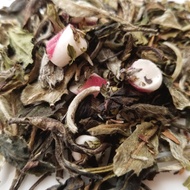 I wanted to do a Candy Cane type of tea this holiday season – I haven’t done a ‘minty’ tea for a little while now (Well, except for our Graveyard Mist, but because that’s part of our permanent collection, that doesn’t count!) and I thought the month of December would be the perfect time to create a minty tea with a sweet twist to it. 52Teas had a Candy Cane Black Tea some years ago (long before it was even a fanciful dream for me to take over 52Teas!) that I absolutely adored. And Southern Boy Teas (another division of Zoomdweebies, which was the main company that started 52Teas) had a Candy Cane White Tea made with shou mei fannings that I didn’t really adore. Oh, I liked it alright but it didn’t get me quite as giddy as the Candy Cane Black Tea.

But I wanted a Candy Cane tea – a white Candy Cane Tea using our beautiful, fluffy Bai Mu Dan. And here it is! Bai Mu Dan blended with refreshing peppermint and creamy vanilla bean and bits of candy cane. (These candy canes are organic, gluten-free, allergen-free and, of course: VEGAN!) It’s sweet, crisp with mint flavor with a soft undertone of vanilla, and delightful!

I was really sad to finish my peppermint tea last month but luckily found a taster of this from last year. Another great tea to help me warm at work! I wasn’t sure how white tea and peppermint would work together but they worked marvellously together. I would have liked a little more candy cane flavour in here but it did have a pleasant kiss of peppermint bark that was about on par with the strength of the base.

Decided to blow through my whole sample of this to make one glorious, spectacularly frothy latte at work today. I had a tough time deciding whether or not to do it hot or iced, but ultimately went with hot because even though it’s really hot outside today it just seemed like this was just more likely intended to be drunk hot.

It was pretty good; I definitely don’t think anyone would be able to miss that the flavour here is sweet, creamy and cooling “Candy Cane” – it just penetrates through the creamy milk in a very clear way. I’m used to drinking a lot of candy cane black teas though and unfortunately I don’t think I was able to distance this tea from my impression of those ones as much as I should have because for the bulk of my time spent drinking this I just couldn’t help but think that it really lacked a lot of body and substance apart from the general candy cane notes. I mean, it didn’t taste bad – it’s just that by the time I had finished the mug I still didn’t feel like I had really been satisfied with the tea’s overall flavour.

Definitely a bit more of a ‘so so’ flavour overall…

Additional notes: Still yum! Trying to work on some peppermint teas. So many peppermint teas. Also drinking the mystery tea advent from SkySamurai that I will post the notes for after Christmas when I find out what the teas are. HOWEVER. I’m not receiving e-mail notifications for any comments or even my own tasting notes, so I apologize if I’m not seeing them. I’m just not able to see replies to comments from all of the tasting notes I have been catching up on. I checked my settings and they are fine, so I don’t know what is happening. Is anyone else having this problem? This honestly is a bummer and isn’t actually helping me catch up on tasting notes right now if Steepster is broken and now I’ll be even further behind….

I always just check new notices since the emailing seems a bit spotty.

I also haven’t been receiving email notifications for a while.

Same, I just use the notifications for mostly everything. I’ve never set to get e-mails for all comments. I do get e-mail notices for comments on my own notes though, and they come through fine. Same with subscribed forum threads.

Yep, no e-mail notifications for these three comments. I have never really used the ‘notices’ option.

I use the notices option, but miss the emails. However, it’s better than Steepster not working at all…

Like I said, I DO have e-mail notices selected ONLY for comments on tasting notes I post (all others I use Notices). And I receive those just fine. I still am, and always have received those fine. I also receive my subbed forum thread e-mails fine.

I am drinking this hot this time and there is a lot more candy cane flavor than my last cup had apparently. Granted there was also 3 large candy cane pieces in the mug so that’s not a surprise. Also, since I recently finished a lot of my peppermint/mint teas, I am certainly glad I have this one around for that flavor, especially because the white tea base is really complimentary to the candy cane.

In other news, I am currently using the instant pot for the first time since moving to school. I am using it as a slow cooker and not a pressure cooker so the cooking isn’t exactly instant but that’s okay.

Oh – I love my instant pot!

We got it as a gift for my Mom but unfortunately the amount she cooks means the instant pot wasn’t so instant because she’d need to cook the food in batches. So when I came to school, instead of me bringing a slow cooker and a rice cooker and a million appliances, she told me to just take the instant pot.

And that’s what I love about it – it’s all those appliances in one. You can pressure cook, slow cook, cook rice, even make yogurt. It pretty much replaces my stove.

What a perfect vanilla peppermint tea. I love that it’s a white tea base so I can drink it after dinner, and it manages to feel lightly creamy without any actual heaviness at all. I didn’t realize the Large size for this one was so small and am actually really sad about it. There’s another order in my future!

I apologize for the size of the “Large” in this case (and the case of all white teas that we produce) – our large size is usually 50g, but 50g of white tea simply would not fit into any pouches that we currently have in stock without crushing the leaves to near dust. Since I respect the leaves far too much to do such a thing and I don’t think we’re planning on having even larger pouches, we must keep our large size pouches at just 25g for white teas at the present time.

Oh no, it was totally my fault for not reading the description better! Thank you for the explanation about the white teas though – it makes total sense and I wouldn’t want it any other way!

This is last week’s Tea of the Week. I generally have my tea ‘menu’ mapped out for a couple of months ahead of time, mostly because I need to be sure that I have the proper ingredients for each tea in stock in time for blending. But this is one that I kind of just came up with kind of late in the game. I changed the menu at the end of October to include this tea – because I realized that I didn’t have ANY minty teas around the holiday (with the exception of Graveyard Mist, which is usually in stock) so I needed to remedy that.

Fortunately, even though I didn’t have many of the ingredients for this tea, I can get my herbs locally so I’m able to get them quickly – and the candy canes I got from an online vendor that is really speedy. The candy canes are vegan, gluten free, nut free and organic. Even the color on the candy cane is derived from plant sources rather than artificial coloring. Tasting the candy on it’s own, it’s actually a rather subtle peppermint candy – but it works with the tea.

The tea has a nice sweetness to it, it’s crisp and minty but the vanilla softens it enough so that it’s not like a swig of mouthwash. I love these flavors with the soft taste and texture of the white tea.