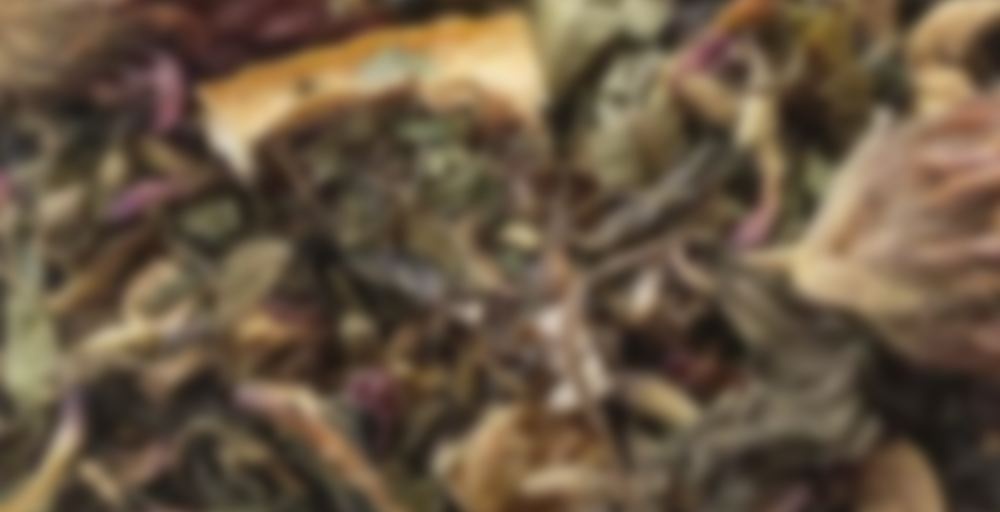 The flavor is a fiery chili, ginger and lemon taste. It is NOT a tea for those timid about heat – this one packs a spicy punch! The sip starts out with an herbaceous note – slightly grassy from the green teas – and immediately, I taste a soft lemon flavor. Almost immediately thereafter, I taste ginger. And then POW! The cayenne hits the palate. This tea has got some SPICE! But even though there’s a good deal of spice to the tea, I still taste the notes of ginger and lemon and I even taste the light creamy notes from the green tea.

The fire to this blend is sure to give you a jump start to your day!

Oh, now this one has a kick! I didn’t even bother reading the description or the ingredients list so the cayenne took me completely by surprise. I even thought that the heat was coming solely from the ginger. This is a fantastic “detox” blend and gives off clean, purifying vibes. I feel automatically healthier the moment I started sipping this.

For me, the main notes are ginger, lemon (alongside the verbena), and cayenne. While it isn’t the type of tea that I’d reach for on a regular basis, and not necessarily my favourite flavour profile, it really hits the spot when you want a healthful dose of awesome in your life. I can see this being an excellent tea to sip on whilst battling a cold or flu.

I think I got this one as my freebie with a 52Teas order a while ago. I thought I’d review this one before summer was over! With ingredients like cayenne and tulsi this is sure to be a blend for me. It’s a unique one! The flavors are definitely interesting and I feel most are all equally represented. Hints of clover and lemon and vegetableness from the tulsi, a little ginger, maybe the pouch settled but I feel like there isn’t enough heat here. But then the green tea seems to disappear behind the other flavors too. It’s interesting three different tulsi is included, and I wish that had shown more too. To be fair, I’m not writing a tasting note when it’s at the freshest, but I do remember it tasting like this before anyway.
Steep #1 // 1 1/2 teaspoons for a full mug// 30 minutes after boiling // 2 1/2 minute steep
Steep #2 // 25 minutes after boiling // 3 minute steep

Loved the lemon ginger aroma that hit me when I opened the little pouch. Lots of pretty flowers in this too. The description talks about how spicy this is but I am getting only the tiniest tingle of heat. I may need to shake the pouch up more, once there is a little room in there for stuff to move around. I can just barely tell that there is green tea in this, it mostly comes across as an herbal. Still, the lemon and ginger taste great together, so even if it’s not what I was expecting, this is a pleasant tea.

First experience with this tea was meh, in my travel mug. Vaguely fruity green with no spice. It could be that I need to deep clean my mug. I added a tiny bit of sugar, which didn’t help.
This time, I am at home, and found it to be delish. Just the right amount of spice, and it works well with the herbs added. And its giving my headcold a run for it’s investment :P
Added a half tsp of honey as well. I’ll have to see if my taste receptors are different when not sick. This definitely isn’t fruity today!
Strange, as I can’t stand the smell of this one dry!!

Just finishing off my cup of this tea – which I’m taste testing. I think I finally got the heat just right!

My VIP who ordered this VIT wanted a lightly caffeinated detox type morning tea. So I started with a green tea base of several organic teas (Chun Mee, Gunpowder, Chinese Sencha & Yun Wu) and three types of tulsi leaf (Green, purple & wild leaf). Then I added lemon verbena, ginger root, red clover leaf & blossoms and cayenne pepper – all known for their cleansing abilities. I also added some dried lemon segments to add a little more lemony flavor to the cup. I used whole, dried cayenne peppers that I cut up into smaller bits for the tea.

And this tea BRINGS THE HEAT. The very beginning of the sip starts out sweet and herbaceous from the green tea, clover and tulsi. Less than a second later, I pick up on the lemon which is tart but also sweet. Almost immediately thereafter, the palate is hit with ginger and then the cayenne smacks my palate around with some serious heat.

It’s very warm – but not so hot that I’m running for the kitchen in search of something to cool the palate. It doesn’t bring tears to my eyes or sweat to my brow. it’s hot – probably the hottest teas that I’ve created thus far – but it’s still not an uncomfortable heat. I like that despite the heat of the cayenne, I’m able to enjoy the other flavors that this blend has to offer. I taste the ginger and the bright lemon notes. I taste the herbaceous tones from the other herbs and the green tea. I even get a nice buttery note from the tea.

This one will be available on the website soon!