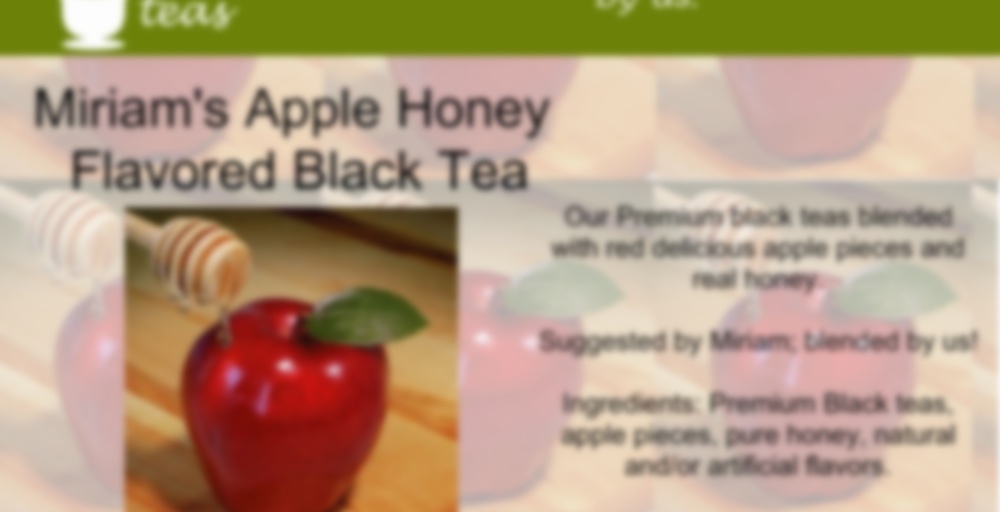 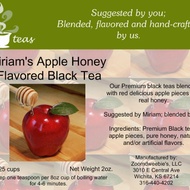 Here’s a suggestion we got from Miriam in the forums back in January: Apple Honey flavored tea.

We did it right with real red delicious apple pieces and real pure honey added right into the mix. Beware, this tea could be a little sticky, but mmm, sooo good.

I cannot (in this instance) tell a lie: I have been sort of afraid to place an order with 52teas.

I’d have to say that flavored teas aren’t really my go-to cup. I really marvel over the wide variety of flavors that Camellia Sinensis is capable of producing all on its lonesome, or at least with a little bit of environmental coaxing.

Today I’ve had two offerings from 52teas, and I’ve liked them both. This is my second, and to be honest it was sort of an unusual flavor for me to choose, as apples are not really my go-to flavor for much of anything. Something about the combination of apple and honey was appealing enough for me to want to give it a try, though, so…here we are.

It’s a subtle tea, to be certain, but quite good. There were chunks of dried apple in the tea leaves. Despite the warning that ‘this tea may be sticky’, there was no rampant clumping of honey-saturated leaves going on, which is good. ;) The smell of the dried leaves doesn’t quite reflect the taste of the tea.

And that taste is…again, very subtle. There’s mild black tea as a base. You sip, and if you hold the tea in your mouth, you get the taste of dried apple…and then on the swallow you get a little bit of its sweet tartness unfolding in your mouth, especially along the sides of the tongue. Definitely apple. Honey may have a presence here, but if so, it’s very mild.

I seem to remember someone always searching for well-done apple teas. I am sort of hoping it’s Jillian so that I can send her some in recompense for my perpetually delayed shipment of sample tea!

I don’t know…I might have said something along those lines in the past, although I’ve also said the same about mango teas. But hey, if you’re willing to share I certainly won’t say no! ;)

I’ve been meaning to try this one for a while. I love apples, so I’m always on the lookout for teas that actually taste like the real thing. I tossed in some sweetener to hopefully bring out the apple flavor a bit more.

I was impressed with the chunks of real apple in the pouch. I believe Frank when he says that there’s real honey in here, because the dry tea leaves were sticking to the dried apple chunks. Gooey chunks, yum!

Up front, I taste tart and bitter tea. The apple is in the aftertaste, sadly. I really don’t care for this. The rush of sour bitterness makes me want to gag. I hope I just prepared this wrong, because it sounded so perfect for me, although I followed the steeping directions properly. This cup is going down the drain before I lose my lunch.

This same thing happened to me today with a tea that I normally like. It made me dizzy and nauseous and it’s not old I just bought it a couple months a ago!