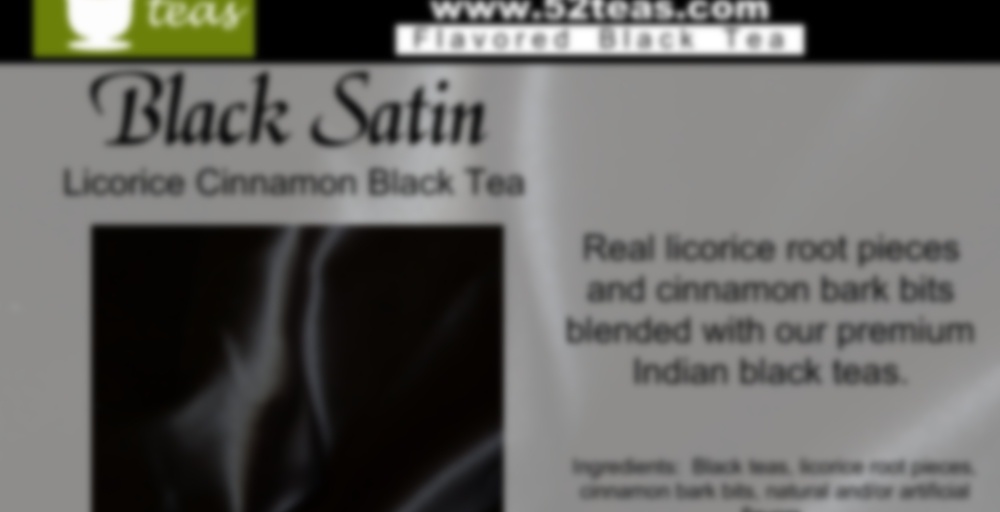 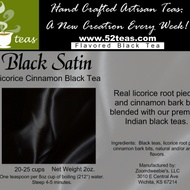 I’m still avoiding the Dashboard. I don’t know when I can look at it again safe from spoilers, so in the meantime if you post about something that might interest me and IS NOT from 52teas, could you link me please? I don’t want to know what’s in that christmas box until I can look for myself (and even if it’s something that ISN’T from the christmas box I’ll know it’s not in there. I don’t want to know what’s not in it either!)

For some unknown reason suddenly the idea of the blend seemed violently unpleasant to me and I had no wish to drink it again ever.

Tonight however it just sort of popped into my head that it was the natural tea to have this evening. And no, I don’t know why that was either.

It tastes like old times. I remember my first ever order from 52teas. I remember badgering Frank into sorting out taxes and customs involved in shipping to Denmark, and the glee when he agreed. I remember the crushing disappointment when I got the first package and realised that it’s seriously stupid to buy a blend with dates when you don’t like dates. At all. And then it just got worse when I realised that I don’t care for pumpkin either. Thankfully I managed to get rid of the mistakes and didn’t give up on 52teas.

That was the metaphorical flavour. The actual real flavour has less licorice in it than I remember and not as much cinnamon. And yet the black tea isn’t dominating the flavour. This really is well balanced, and if you like licorice it’s a one to try.

Why was it that it suddenly seemed so unappealing to me?

! I hadn’t even thought about the whole spoiler issue – argh, I’m gonna have to start avoiding the dashboard, too

You haven’t got yours yet either? Poor us!

No, I don’t really like spoilers. It depends on what it’s for of course, but if it’s a book/film/series that I really like I hate spoilers. For other things I can live with a little spoileryness. But not in a christmas calendar. That’s not fair.

I’m only watching the notifications tab at the moment.

It’s an awesomesauce word too. :D

I’ve gotten mine, BUT I promised my family to not start it up until everyone was together for the holidays which will not happen for ANOTHER BILLION YEARS (or a week, if you want that in non-hyperbolic time) Hope you get yours soon!

Funny, I usually don’t mind spoilers at all, but I really want to discover each tea myself.

Argh that must be so frustrating! I have the scratch-card christmas calendar thing. I only need three more reindeers to win 5000 kr (!!!) which is the third largest prize (I haven’t got a glimmer of a chance of the first and second prize) and it’s SO HARD not to scratch all the remaining days right now. (It’s about $900)

I’m glad you didn’t give up on us too. And I don’t think anyone is posting any spoilers yet.

I just had to find my feet with you, Frank. :) Fruit and berries. I shall stick to fruit and berries. That just can’t seem to go wrong. :D
I’m sure you would know. :) But I just don’t dare take the chance. I really don’t want to know what’s in it until I can see for myself. (Why aren’t they, though???)

Figures…my best attempt at this and it’s the last of my stash…oh well! Good while it lasted! LOL Upping the rating…

Another one of my favorite teas from 52Teas. If Chocolate Banana Rooibos is my favorite, I would have to say that this one comes in a close second. I love it.

And… an interesting side note, every time I brew this tea (or even happen across it as I sort through my stash to find a tea to brew) I hear that song “Knights in White Satin” from the Moody Blues playing in my head. I realize that the song is WHITE SATIN and not Black Satin, but tell my head that. LOL I love that song – so mysterious and beautiful…

And this tea is so good. The licorice flavor is the BEST of any other licorice flavored tea I’ve tasted (a close second would be Golden Moon’s White Licorice, which is also quite special to me because my favorite ice cream flavor is Tillamook’s White Licorice…but I digress) The cinnamon is not a sweet cinnamon, rather than a spicy-hot type cinnamon flavor, and the sweetness of the cinnamon cuts through some of the sharper notes of the licorice perfectly.

Lori: It’s awesome awesome AWESOME! But the only place I’ve ever found it is at the Tillamook dairy in Tillamook OR… we visit that area about once a year or so, so whenever we visit, I make a point to make a trip to the dairy for ice cream! A once a year treat! LOL

I totally agree, this one is really good. I like it with a bit of milk too.

(Also, I’m pretty sure it’s nights in white satin, but now I’m getting mental images of knights wearing satin on top of their plate armor and everything, so I think I like your version best!)

LOL! Angroboda, you’re probably right, it probably is Nights in White Satin… I guess the romantic artist in me sort of envisions KNIGHTS when I hear this song. And… when I drink this tea…

This is one that will probably grow on me. After loathing licorice for most of my life, I’ve become a huge fan of it in the last year or two – not the sweet licorice sticks, but actual licorice root. This tea has a lot of that, as well as cinnamon bark and Indian black tea. The result is much creamier than I expected.

I can taste a slight bite from the cinnamon, but mostly this tastes like a creamy version of a licorice herbal tea that I have (and love). I wish there was a bit more of that refreshing licorice taste, but this is good nonetheless.

I’ve had the same experience with it. I liked it the first time I tried it, and then I’ve liked it more and more every time I’ve had it since. I’m getting a little concerned about running out. If it’s still around after next payday and the financial situation isn’t completely shot to a bad place with unexpected bills (I have a suspicion I might get one…), I’ll definitely have to get another one of that. Or try to recreate something similar. There are only three left of it though, so I’m not getting my hopes up about it.

Drinking Black Satin because the air is that chilly tonight 0_o

This is an interesting tea- it smells mostly like cinnamon, but tastes mostly like licorice. That’s fine with me, I enjoy licorice teas. This one almost tastes a bit like rootbeer, but it’s not sweet at all. This isn’t a tea I would want to drink everyday, but it fills a niche.